May 1st has a rich and tumultuous history in Germany as a day dedicated to workers around the world. But falling union membership and a rapidly changing labor market may mean it is losing some of its significance. 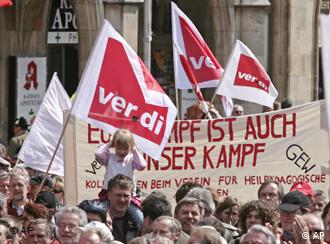 May Day rallies are a tradition in Germany

When employees of Germany's insurance group Allianz found out last year that their company was getting ready to fire 7,500 people, they found themselves in a state of shock. For decades, the German insurance sector has been a safe bet for staying employed for life.

"I myself have worked for Allianz for 30 years," said Gabriele Burghard-Berg, head of the works council at Germany's insurance giant.

"And I was proud once that we were treated fairly and that we worked in a company in which people were the focus of attention. Those times are over," she said.

This year, Burghard-Berg and her colleagues will, for the first time, have to fight for their jobs and will participate in May Day demonstrations.

Germany's unions, however, are facing dwindling membership rolls despite the country's high unemployment rates and job cuts in the insurance, banking and telecommunications sectors. The German Trade Union Federation (DGB) -- the umbrella organization of German unions -- has lost five million members since the 1990s 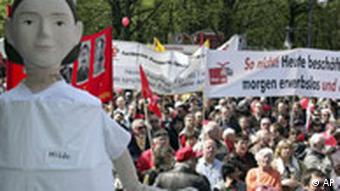 People join unions when their jobs are threatened

"We realize that we're losing senior and unemployed members, but we're increasingly getting young people, women and full-time employees to join," Uellenberg said.

"That's because people are saying: yes, this is an emergency and I can't make it on my own. The union is on our side."

Uellenberg says that May Day demonstrations remain popular -- even though speeches are getting shorter every year and the demonstrations are purposefully staged as public festivals, with lottery booths and vaudeville acts.

"The epoch of solemn May Day speeches is over," Uellenberg said. 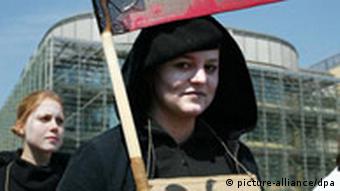 Some people who attend May Day demonstrations in Germany come for the carnival-like atmosphere and cheap beer without realizing that May Day is inseparable from the history of the labor movement.

In the 19th century, hundreds of thousands of workers demonstrated on this day, demanding eight-hour work days and the right to establish unions.

Hitler's National Socialists used the holiday for organizing propaganda marches and making inflammatory speeches. Neo-Nazis still like to protest on this day.

In former Eastern Germany, the holiday was only ostensibly a celebration of workers' rights. Following the Soviet model, May Day events resembled more a military parade than a spontaneous workers' movement.

Today, however, May Day is the day on which unions take to the streets.

"In the moment in which people notice that their money and their jobs are threatened, they become union members," Uellenberg said. "Then they need protection and then they want to take part in the decision making."

Thousands of workers downed tools Monday after the IG Metall trade union called strikes to step up pressure for wage talks in the electrical, engineering and metalworking sectors. (30.04.2007)

Airbus Workers Across Europe to Down Tools Friday

Tens of thousands of Airbus workers are expected to walk off the job on Friday in an unusual Europe-wide labor action against plans by the struggling aircraft manufacturer to slash 10,000 posts in four countries. (15.03.2007)

German workers at European jet maker Airbus said Thursday they felt cheated by plans to slash jobs under a drastic restructuring bid, while officials touted their success in limiting the damage. (01.03.2007)