Faber and the young woman: the best-selling book by Max Frisch tells a disturbing tale of love and tragedy against the backdrop of the modern age and its technological advances. 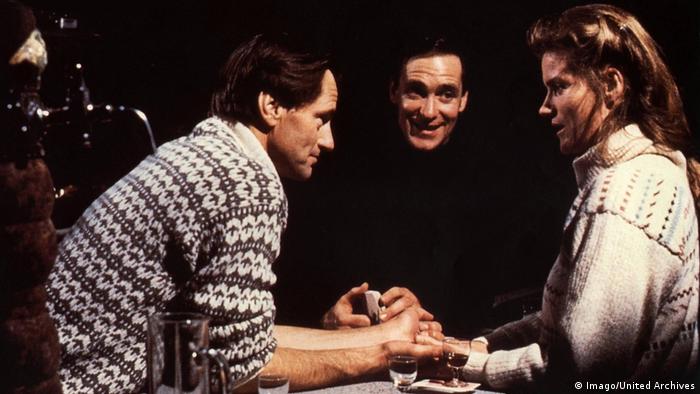 It all starts off with a straight-forward narrative: Walter Faber is a Swiss engineer working for UNESCO. He's constantly on the road, traveling the world for one reason or another. Then, by coincidence while on a cruise from New York to Paris, he meets a woman named Elisabeth — with whom he falls in love.

"Every time we went to a ristorante I found fresh pleasure in watching the girl, her delight with the salad, the childlike way in which she gobbled rolls, the curiosity with which she looked about her, ..."

Walter comes to lovingly call her "Sabeth" because calling her Elisabeth seems too ordinary. And Sabeth, in turn, starts referring to her 50-year-old companion by his last name, "Faber." They get to know each other during the long passage to Europe by ship — a type of journey that jet-setting Walter Faber would likely never have undertaken if he hadn't survived an emergency landing in the middle of the Mexican desert during his most recent flight.

But back on the cruise ship, Faber — along with the reader — begins to wonder: who is this young woman nearly 30 years his junior?

It turns out that the unfortunate and unexpected stop in Mexico set some wheels in motion for a series of events that would change Walter Faber's life, transporting his past straight back into the present.

While waiting to be rescued from the crash landing, Walter met one of his fellow passengers on board the plane, who turned out to be the brother of an old friend named Joachim Hencke. When Faber learns that Joachim was living in nearby Guatemala, running a tobacco plantation in the middle of nowhere, he decides to take the time to pay him a visit — only to encounter his lifeless body upon arrival; Joachim had apparently hung himself.

Having survived the emergency landing and discovered the body of his friend, Faber decides to break up with his then-girlfriend in New York. He then immediately embarks upon the fateful voyage to Europe, where he meets Sabeth. Their love affair grows stronger, taking the pair on a road trip to Italy and Greece via France.

Despite the age difference, Walter feels happy whenever he is around "the girl" — culminating in a passionate night of lovemaking at the Hotel Henri IV in Avignon. They get to know each other more and more: Walter puts up with her enthusiasm for art as he sips Campari and reminisces about the amazing sex they had. He also learns that Sabeth's mother, Hanna, lives in Athens, not really registering at first that he and his now-deceased friend Joachim also once knew a woman named Hanna.

Eventually, it turns out that the woman that Faber has fallen in love with is none other than his own daughter, as further tragedy awaits the troubled engineer.

Author Max Frisch was known as a ladies' man; he once admitted that certain aspects of "Homo Faber" were inspired by true events in his own life

The book is written as a retrospective report of sorts, as a series of journal entries told from Faber's point-of-view. The direction it is headed becomes clear early on despite overlapping timelines and frequent shifts in narration, switching between a neutral documentation of events as they occurred and moments of deep reflection:

"Sabeth might still be alive. I don't deny that it was more than a coincidence which made things turn out as they did, it was a whole train of coincidences."

Was it fate or coincidence? How can he explain the things he is experiencing? Faber clings to the tools of his engineering mind to analyze the situation in hindsight: "I don't believe in providence and fate; as a technologist I am used to reckoning with the formulae of probability."

The shadows of World War II

The slender book of 200 pages written by Swiss author Max Frisch was first published in German in 1957. World War II, which had devastated large parts of Europe, had ended only 12 years earlier. The war plays only a minor, but decisive role in Homo Faber's narrative.

The reader learns that Walter's former lover Hanna became pregnant in 1936. With Hanna being half-Jewish, Walter offered to marry her to ensure her safety — but when she heard Walter refer to the baby in her womb as "your child," she decided to leave him, assuring him that she would have an abortion.

It turns out that soon thereafter she started a relationship with Joachim Hencke, following him to Paris and London and eventually marrying him.

Sabeth later grows up believing that Joachim Hencke is her real father, never knowing about Walter.

Observations on the human condition

Despite taking no active role in actually causing the events that descend upon him, Faber wonders what he did wrong to deserve all this. His reflections are punctuated by detailed calculations that present him and his character as a man of the modern world — a Swiss engineer who appreciates nothing more than the kind of precision one can only get from documenting dates and times and other measurements.

But none of these objective readings can shield him from the irrational nature of the human condition — including his own: Faber remains blissfully ignorant at first when he learns that Sabeth's mother is a woman called Hanna. His feelings for Sabeth are that overpowering. And thus a tragedy of Greek proportions begins to unfold.

Walter Faber's misfortune develops further even once he is nearly certain that his beloved Sabeth must be his own daughter. Toward the end of their trip in Greece, Sabeth suffers a snake bite. She survives the poisoning, but ends up dying from the head injuries sustained during her fall. And there's nothing Faber can do to stop it — in a deliberate and stark contrast to the title of Max Frisch's book.

Frisch, an architect by trade, christened his story after the Greek concept of human beings in control of their own fate by focusing on work and labor: Homo Faber. Yet there is a contrast between Faber's values and the reality of his life in the book. The question of how technology and human beings could co-exist in the modern world was a major subject in the 1950s, and a theme that repeatedly appeared in the literature and art of that period. How viable are concepts like fate and retribution in the modern world? What roles do myths, faith and beauty play? Where do they factor in in this advanced world seemingly controlled by human beings? 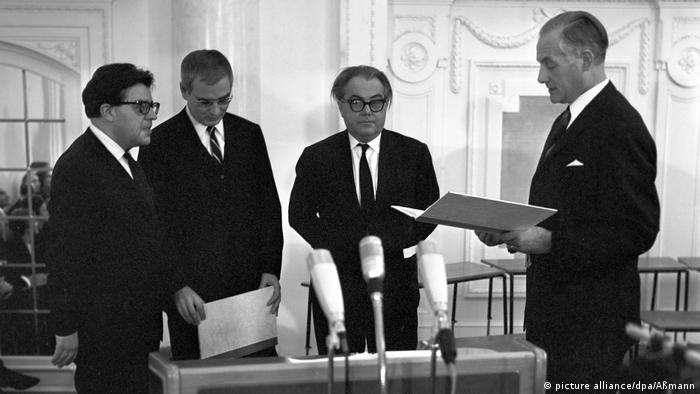 Among many awards, Max Frisch received the Schiller Memorial Prize in Stuttgart in 1965 along with writers Erich Fried and Martin Walser

The book is divided into two parts. The first is "written in Caracas, June 21 to July 8," detailing Faber's journey to Mexico and Guatemala and then on to Europe with Sabeth, ultimately culminating in her death. At the end, there's a detailed medical report, implying that this tragedy could have been prevented.

The second part takes the reader on another journey to various corners of the world — to Caracas, New York and Cuba — places that author Max Frisch traveled to himself. It is during this part of the book that Walter Faber begins to undergo a transformation. He realizes that he is actually seeking a lasting connection in life, which he wants to manifest in his renewed relationship with Hanna: "I cling to this life as never before..."

But tragedy rears its head again. At this point, Faber is gravely ill. His first-person report ends with the words "They're coming" as he's being wheeled into surgery, which he is unlikely to survive.

This reflective part of the book was largely ignored in Volker Schlöndorff's 1991 film adaptation of Homo Faber, which was released under the title Voyager. Frisch was still alive at the time, helping out with writing the dialogues for actors Sam Shepard, Julie Delpy and Barbara Sukowa. But the movie was nowhere near as successful as the book, which remains one of the most-read German books of the 20th century.

Despite the long outdated gender roles as described in the book, the conflict at the heart of the story remains just as valid today: the dichotomy between those who advocate a world in which humankind is able to control its destiny with the help of technology and those who would rather believe that people are subject to forces beyond their control — be that fate or myth — continues to rage on in the 21st century.

Born in Zurich in 1911, Max Frisch initially studied German literature but abandoned those studies to follow in his father's footsteps and become an architect. In 1942, he opened his own architectural firm but continued to write as well. In 1954, his novel I'm Not Stiller became a major success. He then quit architecture to focus exclusively on writing. Frisch was also an avid traveler, visiting countries such as the US, Mexico, Cuba and Italy at a time when casual world travel was still uncommon. Many of his books, including I'm Not Stiller, Homo Faber, and Gantenbein (1964) have since become compulsory reading material in German classrooms. The award-winning author and playwright died in 1991.