The latest line drawings discovered by archeologists in Peru show geometric figures portraying humans, apes and a whale, according to a report published in National Geographic.

Scientists flew the drones over the region about 30 meters above the ground, and spotted 50 geoglyphs – 25 were unknown, while the local population was aware of the other 25 drawings.

Researchers hope that documenting the newly found line art will give them new insight into the area's ancient cultures.

Cuadrado said the massive drawings seem to point at "a tradition of over a thousand years that precedes the famous geoglyphs of the Nasca culture, and which opens the door to new hypotheses about its function and meaning." 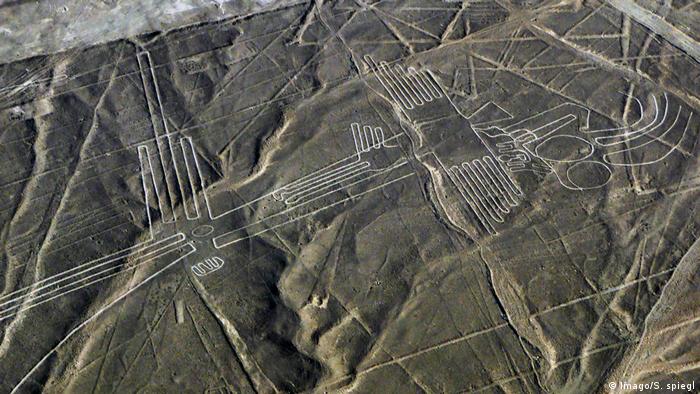 A glimpse of the world-famous Nasca drawings

Archeologists believe the Palpa drawings were created by the Paracas and Topara cultures between 500 BC and 200 AD, which would make them older by many centuries than the famous Nasca lines in the neighboring Nasca Valley.

And unlike the renowned Nasca sketches that were etched into the high desert sand and are only visible from above, the Palpa geoglyphs were found on the slopes of the region's hills, meaning they can also be observed from the ground.

Yellow-spotted river turtle eggs are a delicacy in Peru. Communities who once collected the eggs to eat themselves are now selling them for ever higher prices, pushing the turtles to the brink of extinction. (28.11.2017)

A court has ruled that ex-President Kuczynski will not be allowed to leave the country pending a corruption investigation. He's not the only Peruvian leader facing allegations of shady business practices. (25.03.2018)

Three European tourists were banished from the Incan citadel Machu Picchu in Peru after taking photos of themselves exposing their backsides, police said Wednesday. (15.03.2018)