Mary Lou McDonald has been confirmed as the only candidate to succeed Gerry Adams as the leader of Irish nationalist party Sinn Fein. McDonald will be formally elected at a special party conference next month. 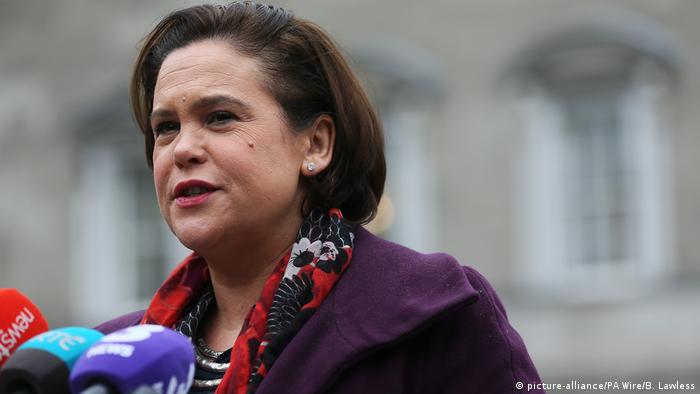 Sinn Fein confirmed that the Irish nationalist party's deputy leader, Mary Lou McDonald, became the only candidate to replace outgoing leader Gerry Adams at the party's national meeting on Saturday. She will be confirmed in the position at a special party gathering on February 10.

McDonald, 48, has been a member of Sinn Fein, a republican party in both the Republic of Ireland and Northern Ireland which is part of the United Kingdom, since 2004. She became Adams' deputy in 2009 and has been a member of the lower house of the Irish parliament since 2011.

"For us in Sinn Fein in the time ahead, we have to grow our party, not just our mandate but also our capacities. We have to modernize, we have to be fit for purpose, fit for our task," McDonald said in a speech to party members in Belfast.

"As we enter a new era, we look ahead with confidence as a party that is about being in government here in the north, in government in the south also, working forward all the time for the realization of our ultimate goal of Irish unity."

Adams, 69, announced in November he was stepping down as the party's leader after 34 years. He was a key figure in the Irish republican movement and played a major role in convincing the Irish Republican Army (IRA), a now-defunct paramilitary wing of the Sinn Fein party, to disarm as part of the Northern Ireland peace process.

"Sinn Fein in north and south"

McDonald is a fresh face for the party as she has no historic links with the IRA, which was responsible for the deaths of 1,700 people during the conflict known as the Troubles in Northern Ireland.

With McDonald's confirmation, the party will have female leaders in their 40s on both sides of the Irish border. Michelle O'Neill replaced former IRA commander Martin McGuinness in the Northern Ireland Assembly last year before his death in March.

"I want to see Sinn Fein in government north and south," McDonald said. "But it will be government based on equality, government that respects the rights of citizens, that delivers prosperity and opportunity for all and reflects our republican ideals."