Martin Luther lives on - in the art world

In contrast to three national Martin Luther exhibitions in Germany, a new international show in a former jail in Wittenberg entitled "Luther and the Avantgarde" triggers controversy with works by 66 artists. 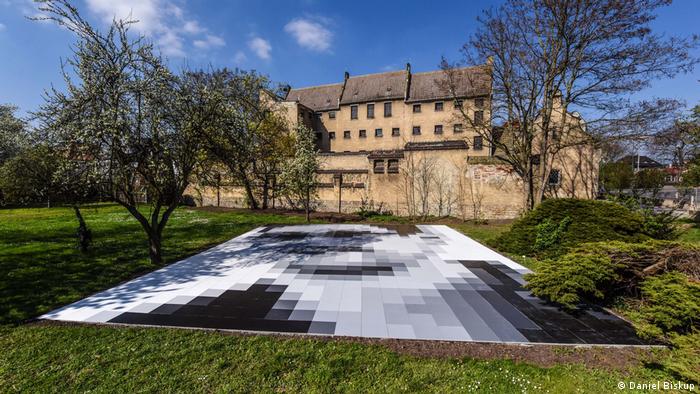 At the starting point in the courtyard, viewers are challenged by a bright orange fist pugnaciously stretched into the sky. The massive patinated sculpture is the realization of Austrian artist Erwin Wurm's view of Martin Luther as a fighter, reformer and world-shaker. He's one of 66 international artists who have contributed to this impressive exhibition in the summer of the Protestant Refomation's 500th anniversary. 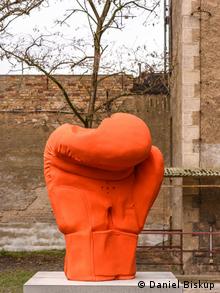 A threat in the jail courtyard: Erwin Wurm's fist

The exhibition's title, "Luther and the Avantgarde," is a strong statement for the reformer's immense presence in our present world and the art world. Whereas the other three national Luther exhibitions focusing on theological, political and historical themes explored the past, "Luther and the Avantgarde" connects the past with the present as well as with the future. The show's organizers, Susanne Kleine of the Bundeskunsthalle Bonn, and Kay Heymer of the Düsseldorf-based Museum Kunstpalast, did not aim to portray Luther in his historical context - for example, by adding some local color of the university town of Wittenberg to the show, the location where Luther lived and wrote his famous 95 theses that triggered significant changes all over the world. No, this show is dominated by modern artists, such as Ai Weiwei, Christian Boltanski, Alexander Kluge, Markus Lüpertz and Jonathan Meese, who all address the way in which Martin Luther changed the world. 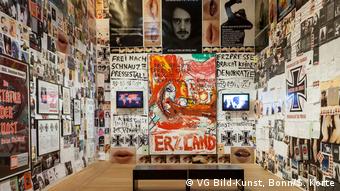 Bright and blatant: The 95 artistic theses of Jonathan Meese

Achim Mohné also tackled that question, wondering who Luther would be like if he lived nowadays. His answer to this question is found in 672 square flagstones on the floor (see top picture). If you run across them you can only perceive gray and black shades. But the further you move away, the more clearly discernible a face emerges from the spot. It's the face of Edward Snowden. From the perspective of a bird or a drone, Snowden's face appears like an iconographic portrait in the 672 flagstones which represent 672 pixels.  Mohné said that in his view, a whistleblower is a "regulator of democracy" - a statement he made on the day when it became known that Chelsea Manning would be pardoned. She received a very harsh jail sentence in Afghanistan for passing on confidential military documents.

According to Mohné, both Snowden and Manning are - like Luther - uncompromising critics of a political system and, like him, had to pay a high price for their criticism. What they all also share, in his view, is that they used technologies that were new at the time, in order to carry out their subversive activities. In Luther's case, it was book printing, and the case of Snowden and Manning, it was the Internet. Mohné positioned his Snowden portrait on the lawn between Wittenberg's jail and the court. There could hardly have been a stronger form of commentary.

However, the organizers didn't really have much of a choice about the location of the exhibition itself. Instead, they saw themselves forced to opt for the former Wittenberg jail that had just barely been renovated. A more suitable location was simply not available in the small town, located roughly one hour's drive from Berlin. 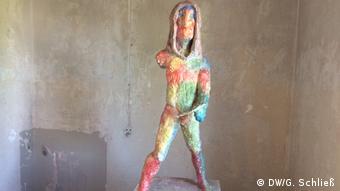 It turned out to be a good choice after all. The paltry and humid prison cells that were transformed into artist berths have enabled the artists to feel removed from reality. Didn't Martin Luther feel just as lonely and locked in within his monk cell? Existential questions arise in such quarters. Chinese artist Jia, for instance, has depicted them by means of Chinese characters moving across the staircase like a ribbon.

The power and the powerlessness of language

Yet the characters are dead and void of meaning as they were banned from use in daily life during the Chinese Cultural Revolution. Thus, part of culture and identity were wiped out. The power and powerlessness of language - Luther has sharpened our perception for that. But language is also a ritual. Jörg Herold's work "Wittenberger Tor zum Paradies" ("Wittenberg Gate to Paradise") has turned that idea into a physical and mystical experience. The avowed atheist spent two weeks in "his" cell and, inspired by the Islamic teaching of the 99 names of Allah, inscribed them into the cell's walls. 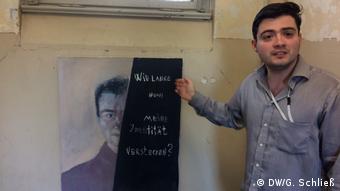 Again and again, the works by the 66 artists convey the sense that Martin Luther's ministry stood for freedom of conscience and tolerance. Markus Lüpertz was inspired by this idea in different way than Jörg Herold. In his view, Luther was a hero. His rainbow-colored sculpture of the "zealot" reveals an unfractured look at the impact of the reformer. Yet another artist, Jonathan Meese, proclaims his own 95 theses on bright posters and in videos. "Kunst ist immer Chefsache" - "Art is always a priority," it reads. In Meese's view, art and religion don't match together; in fact, they are even enemies because religion, by nature, cannot tolerate freedom. Not surprisingly, therefore, Meese accuses Luther of being a "blind follower" without a future.

Young German-Russian painter Yury Kharchenko keeps his distance to Luther, and that, in his view, is due to his own Jewish heritage. In this way, he touches upon one of Luther's darkest sides, namely his anti-Semitism. In Kharchenko's view, it has a connection with the later anti-Semitism of the National Socialists. "Wie lange noch meine Identität verstecken?" ("How long should I hide my identity?") Kharchenko wrote on a double-portrait of him and Herschel Grynszpan, a 17-year old Polish-Jewish boy who assassinated German diplomat Ernst vom Rath on November 7, 1938, in Paris.

The painting has a lot of significance for Yury Kharchenko's life - it could almost be seen as an artistic coming-out. As Kharchenko's family was originally named Grynszpan, it is quite likely that the painter and the assassin belong to the same Jewish family. 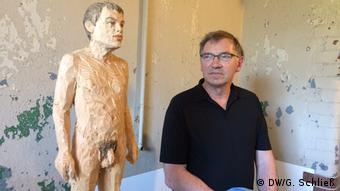 Naked before ourselves and mankind: Stephan Balkenhol in his prison cell

Stephan Balkenhol's work "Nackter Mann" ('Naked Man'), presented in a jail cell a few doors down, expresses the same vulnerability as Kharchenko's painting. Balkenhol has carved his work into a cedar trunk, featuring a fragile man lacking any protection.

According to Balkenhol, Luther's battle against images and rituals has driven us all out of the communion of saints - the Protestant version of the expulsion from the Garden of Eden. It's an experience that continues to connect us all until today: Man stands naked before himself and the world.

Arts.21 goes to Wittenberg where Luther triggered the Reformation 500 years ago. We visit international art exhibitions devoted to this controversial religious figure. (22.05.2017)

Rebel or ruffian: Who was Martin Luther?

Celebrating the 500th anniversary of the Reformation, the Wartburg Castle in Eisenach features the special exhibition, "Luther and the Germans." It explores the relationship between Luther and his region. (04.05.2017)

The Los Angeles County Museum of Art has opened a show on German art from the 16th century. The exhibition brings art from the European Renaissance to California. (21.11.2016)