John Steinbeck and John F. Kennedy; Watergate and the Panama Papers; Janet Cooke's fake news or Maureen Dowd's biting op-eds: Here's a look back at the rich history of the Pulitzer, the US' top awards for writing. 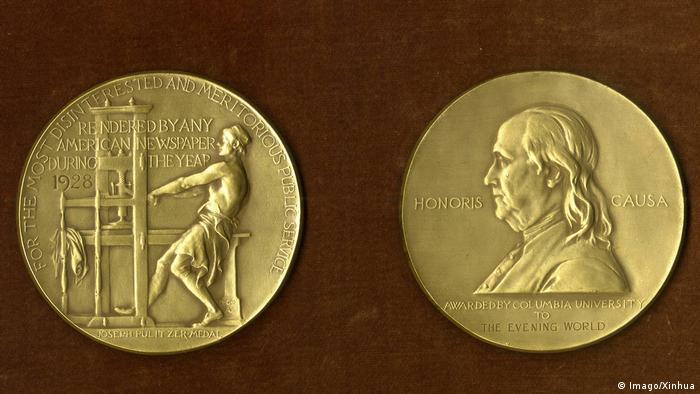 To boost circulation, a newspaper publisher stooped to sensationalistic, partly fabricated news and invented the yellow press. Both he and his arch-rival William Randolph Hearst stoked public hostility to a foreign power and stirred up the mood for the Spanish-American War in 1898.

That publisher was Joseph Pulitzer, namesake of the venerable awards noted worldwide and bestowed every April since 1917 in a university library in New York for the highest achievements in music, poetry, photography, literature —  and most importantly, journalism. Conscious of his legacy, the newspaper magnate who died at age 47 bequeathed his fortune to found a school of journalism and the Pulitzer Prize.

Whether or not he created the prizes to save his reputation, Pulitzer was an impassioned truth crusader, and government corruption was his greatest nemesis. Anything but modest in his assessment of the role of journalism in a democratic society, he wrote, "The power to mold the future of the Republic will be in the hands of the journalists of future generations." 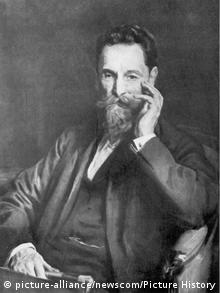 Publisher of the St. Louis Post-Dispatch and the New York World, Pulitzer made them the country's most-read newspapers according to the formula he once articulated: "Put it before them briefly so they will read it, clearly so they will appreciate it, picturesquely so they will remember it and, above all, accurately so they will be guided by its light."

Read more: The truth will out: the Pulitzer Prize in the Trump era

Inside Germany and capitalism critique

In 1917, the first Pulitzer Prize for Reporting went to Herbert Bayard Swope for articles that had appeared in the New York World the previous year titled "Inside the German Empire." Reporting from Germany in the early years of World War I, Swope later went on to become the paper's editor-in-chief. His advice to journalists might be well-taken today: "I can't give you a sure-fire formula for success, but I can give you a formula for failure: try to please everybody all the time." 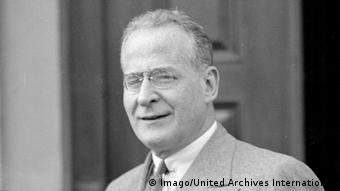 In 1924, Robert Frost won the first of his four Pulitzer Prizes with his fourth volume of poetry. "New Hampshire: A Poem with Notes and Grace Notes" is an upbeat portrayal of life in New England. "A complete poem is one where an emotion finds the thought and the thought finds the words," wrote Frost, whose thought-provoking statement almost sounds like a commentary on the current age of alternative facts: "Most of the change we think we see in life is due to truths being in and out of favor," he wrote in a letter in 1916. 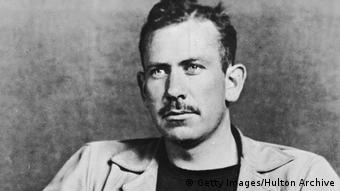 The rise and fall of presidents

In 1940, John Steinbeck won a Pulitzer for his novel of the previous year, "The Grapes of Wrath," a realistic depiction of the desperate plight of tenant farmers in the 1930s. Steinbeck famously said, "I want to put a tag of shame on the greedy bastards who are responsible for this," meaning the Great Depression. The novel is an indictment of rampant capitalism. "The quality of owning freezes you forever into 'I,' and cuts you off forever from the 'we'," is one memorable quote from the novel. 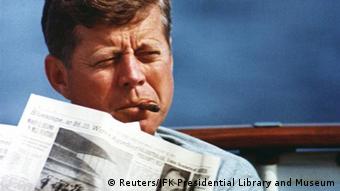 Kennedy was a passionate newspaper reader, even if he didn't always like what he found there

In 1957, John F. Kennedy won a Pulitzer for his 1955 book, "Profiles in Courage," depicting eight historic members of the US Senate who demonstrated integrity in the face of opposition. Then himself a senator, Kennedy went on to become the 35th President of the United States.

In striking contrast to the 45th President, Donald Trump, who has defamed journalists as "the lowest life form" and "enemies of the American people," Kennedy acknowledged their importance in a democratic society, if slightly begrudgingly: "Even though we never like it … there isn't any doubt that we could not do the job at all in a free society without a very, very active press," Kennedy wrote. He also felt that a politician should acknowledge the influence of the arts: "When power leads man towards arrogance, poetry reminds him of his limitations. For art establishes the basic human truth which must serve as the touchstone of our judgment."

In 1973, the Washington Post won the Pulitzer Prize in Public Service for the work of its young reporters Carl Bernstein and Bob Woodward, whose investigation of the Watergate affair eventually brought down the administration of US President Richard Nixon. Woodward, described as "the most celebrated journalist of our age," is currently an associate editor of the Washington Post and the author of 18 nonfiction books. Bernstein, also a book author, is a bitter critic of what he calls the current "media crisis" and "idiot culture."

In 1981, Janet Cooke was the first Afro-American woman to win the coveted Pulitzer Prize, based on her depiction of an eight-year-old black heroin addict in Washington named Jimmy. The articles in the Washington Post were so harrowing and startlingly detailed that they generated a national outpouring of sympathy for the boy. There was a problem, however: He didn't exist. Cooke had completely fabricated the character, and her editors had not checked the sources. After the scandal broke, Cooke returned the prize and left her job and public life. It was a severe blow to the Post's reputation — and to that of journalism in general. 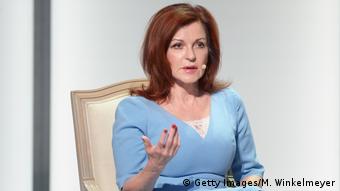 In 1999, Maureen Dowd took a Pulitzer for distinguished commentary based on her columns in the New York Times on the affair of then-President Bill Clinton with Monica Lewinsky. "These are not grounds for impeachment. These are grounds for divorce," she wrote then. Dowd is known for her scathing and sometimes wickedly humorous depictions of people in power — and of contemporary life in her country: "The idea of American exceptionalism doesn't extend to Americans being exceptional."

In 2005, the American composer Steven Stucky won a Pulitzer for his Second Concerto for Orchestra, described by the Los Angeles Times as a "colorful, delight-bringing score." Unlike many 20th and 21st century compositions, Stucky's music is "graspable," to use his own description. The composer, who died in 2016 at age 66, often referenced history in his prolific output. "Take Him, Earth" is a choral work from 2012 marking the 50th anniversary of John F. Kennedy's assassination, and "Silent Spring" of 2011 is based on the famous book on environmental issues written a half century earlier by Rachel Carson. 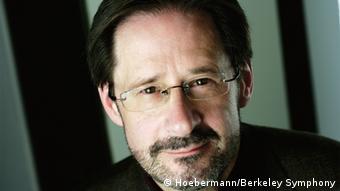 In 2017, the International Consortium of Investigative Journalists (ICIJ) won for the Panama Papers, uncovering offshore tax havens used by politicians and the super-rich. Included in the consortium was Germany's Süddeutsche Zeitung newspaper, which initially received 11.5 million secret documents. For over a year, more than 300 reporters from 76 countries participated in their evaluation.

Although only US media and journalists are eligible for a Pulitzer, the American-based ICIJ's distinction reflected this unprecedented international effort. "These days, a lot of us in journalism feel like we're part of this embattled and shrinking tribe," said ICIJ Senior Editor Michael Hudson. "We've endured, we've seen layoffs, we've seen newspapers going under, and then President Trump comes into office saying we're the enemy of the people. But we're not dead yet. And the Panama Papers shows that to people all over the world."

This year's Pulitzer Prizes are announced in New York on April 16.

The Pulitzer Prizes, honoring achievement in journalism and literature, were announced Monday in New York, with The NY Times taking home three awards. A St. Louis paper was honored for its reporting on racial unrest. (21.04.2015)