With the only leader Zimbabwe has known now gone, the ruling ZANU-PF party's representative in the UK says the country is ready to move on — but can it expect real change from a successor at Mugabe's side for decades?

While many Zimbabweans are rejoicing over the exit of the long-time president, Robert Mugabe, worrying questions over the country's future have not left with him.

To many, the situation could hardly be worse, with endemic corruption, economic mismanagement and estimates of unemployment as high as up to 90 percent.

Yet Mugabe's party, ZANU-PF, remains in power and seemingly immovable.

The ex-president's attempt to anoint his second wife, Grace Mugabe, as his successor failed after a prolonged and dramatic stand-off, which included military intervention deemed lawful by a high court in recent days.

On DW's Conflict Zone, ZANU-PF official and the party's representative in the UK, Nick Mangwana, tells host Tim Sebastian that Zimbabweans are ready to move on from the past.

That readiness to move on includes accepting a deal not covered by the country's constitution, which gives Mugabe immunity from prosecution. 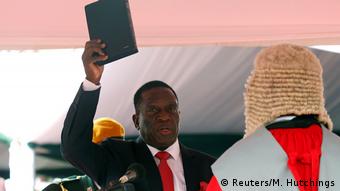 As the new president, Mnangagwa inherits the protection from prosecution which Mugabe enjoyed as leader under the constitution.

"If you had a referendum on this I would tell you 90 percent of Zimbabweans would endorse this deal," Mangwana told Conflict Zone.

In with the new?

But if Zimbabweans are satisfied with Mugabe's exit, can they be so hopeful as to expect more democracy from the recently inaugurated President Mnangagwa, a longstanding ally of Mugabe?

"Here is a man that has been the speaker of parliament, who showed an even-handedness in parliament … A man that lost elections and was happy to accept the results," said Mangwana.

In 2002, whilst the speaker of the parliament, Mnangagwa was one of 20 individuals named in sanctions by the European Council over "activities that seriously undermine democracy, respect for human rights and the rule of law in Zimbabwe."

A UN security Council report, also in 2002, named President Mnangagwa as a "key strategist" in an elite network involved in illicit diamond trading.

This account – and the need for a Zimbabwe-led investigation – is disputed by the party's chairman in the UK, who says the report contains "no facts whatsoever."

"It's not our responsibility to use money to investigate things that have happened in the Congo," Nick Mangwana told DW's Tim Sebastian.

Even more serious is Emmerson Mnangagwa's tenure as the head of Zimbabwe's intelligence agency, which coincided with the so-called Gukurahundi massacres in which 20,000 people from the Ndbele tribe were murdered or disappeared. He has denied any role.

"We were in the very formative years of our country. Mistakes were made," said Mangwana.

Was he diminishing the seriousness of the massacres?

"We lost people, we lost Zimbabweans and, for all you care, I lost family too. It's unfortunate that it happened, but in the formative years of any nation - if we go back to the history of Britain, we will find that there were people that died. It doesn't clear people. It doesn't make it any better. But the facts still remain in the formative years of a nation, things will happen that should not have happened." 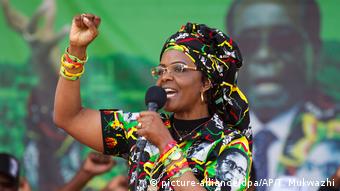 It is understood the deal struck by Robert Mugabe when he left office also grants immunity to his wife, Grace Mugabe, and extended family

But while Mangwana denies that the new leader of Zimbabwe is a hostage to ZANU-PF's violent record, it is unlikely Mnangagwa's ascent to the presidency came from a desire for real reform.

Tim Sebastian put it to Nick Mangwana, the party's representative in the UK and Europe, that it was the threat of Grace Mugabe as president that drove the change. Did she risk the vested interests held within the party and the protection many were counting on Mnangagwa to provide?

'People deserve what they vote for'

With ZANU-PF and Robert Mugabe in power since Zimbabwe gained its independence – and the state of the country their legacy – shouldn't the party admit that people deserve better than what they offer?

"People deserve what they vote for. Exactly that's what democracy is about. If people are choosing ZANU-PF then they deserve ZANU-PF," said Mangwana.

The ZANU-PF official insisted that the party had plenty of positives in their record to campaign on, such as electricity coverage, literacy rates, and hospital building.

And what about human rights?

"We have a lot to improve on that front … and lessons will be learned."

Citizens of Zimbabwe have celebrated late into the night after President Robert Mugabe resigned, ending almost four decades of rule. The nation is now waiting to see who will replace the veteran leader. (22.11.2017)

He has finally stepped down. The era of Robert Mugabe has ended. His successor Mnangagwa must harness the momentum to build political bridges — otherwise the turning tide could take him with it, says Claus Stäcker. (20.11.2017)