The attempted coup, which collapsed within 48 hours of its launch, sent shockwaves around the football world and provoked furious protests from football supporters, many of whom have begun to demand supporter representation in the running of their clubs, along the lines of Germany's so-called 50+1 rule.

Among them is the mayor of the Greater Manchester city region, Andy Burnham, who has launched a five-point "Reclaim Our Game" plan aimed at reforming football governance in the United Kingdom, including a version of 50+1.

"I've long admired the German model, which protects the sporting ethos of clubs and prevents commercial forces from running riot," Burnham told DW. "I'm afraid that we've allowed commercial forces to run riot in football in this country, at times to the detriment of our clubs.

"And if you follow that path of unchecked market forces, a Super League is where you end up." 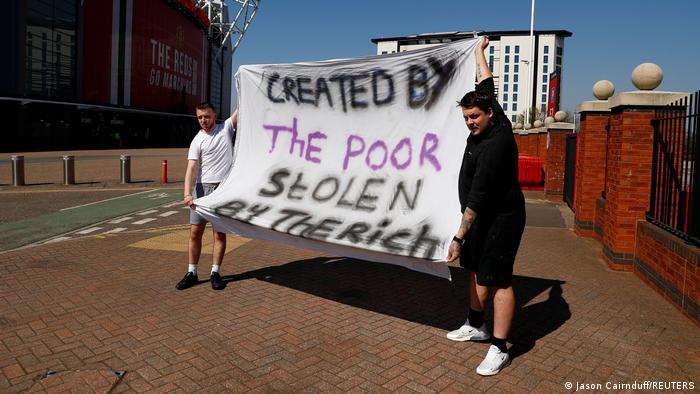 Football fans in Manchester were furious at Super League proposals

Burnham, a 51-year-old former Labour government minister who became Manchester's first "metro mayor" in 2017, is himself an ardent football fan.

He has stood up for football-related causes before, including helping to launch a second inquiry into the Hillsborough disaster in 2009 and co-launching the "Our Beautiful Game" initiative in 2020, which proposed legislation to reform football governance in the UK.

Among the suggestions was a proposal to "study lessons from abroad and seek to champion supporter involvement in the running of clubs." In Germany, the 50+1 rule stipulates that a football club's members control at least 50% of voting shares plus one share, preventing majority takeovers from external investors.

It is one of the reasons why Bundesliga sides Bayern Munich and Borussia Dortmund were not involved in the attempt to form a Super League last week, and Burnham has demanded UK government legislation to implement a similar model in England.

"This would include a change of home ground, club colours, badge or kit or indeed change of league." 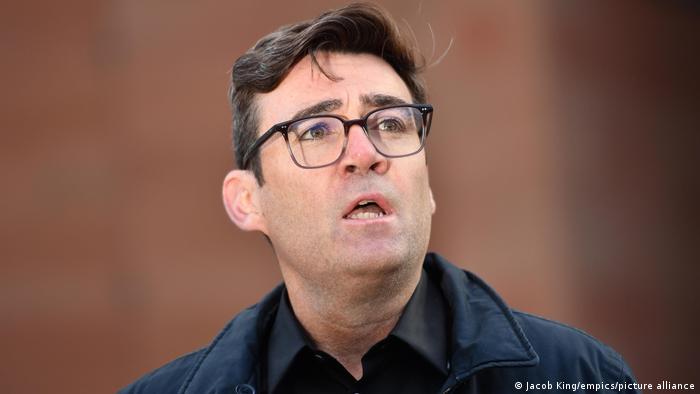 Burnham has called for reforms in English football, and has spoken of his admiration for Germany's 50+1 rule

'Football is not just a money-making vehicle for the richest'

Looking further ahead, Burnham has also demanded legislation to give democratically run supporters trusts first refusal in the event of a sale of shares in their clubs, saying: "This would set them on a path to increased share ownership over time."

Earlier this month, for example, supporters of Premier League side Newcastle United launched the "1892 Pledge," a supporter-funded initiative aimed at raising enough money to purchase a 1% stake in their club. Newcastle is currently owned by the unpopular Mike Ashley and was recently the subject of a takeover bid by the sovereign wealth fund of Saudi Arabia.

Back in Manchester, mayor Burnham says: "Supporters have built these clubs over generations. The German model recognizes that and protects them. Whereas here, as we've seen in the past week, these great clubs could be taken from us in a heartbeat and there's actually no power to stop them.

"People will ask: why are we dedicating so much time to football? Well in Manchester, [United and City] matter massively economically, emotionally, socially and historically. They are at the core of the identity of this city. And we cannot allow them to be taken from us.

"Football is not just a money-making vehicle for the richest."