Malta is ignoring pressing calls for help from Libyan migrants at risk of drowning in the Mediterranean Sea, Sea rescue organization Alarm Phone has said. Their inflatable boat is out of fuel and losing air. 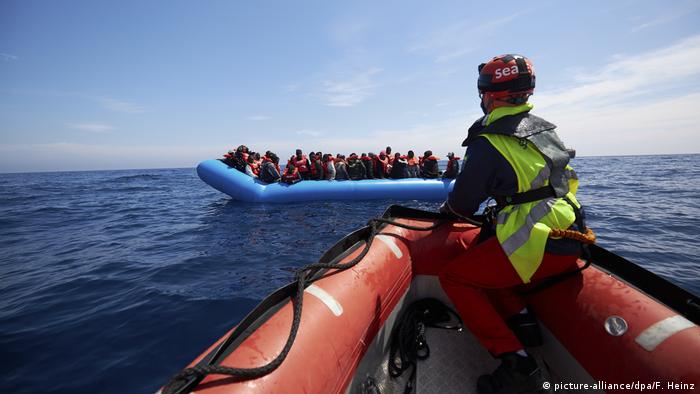 Some 110 people crossing the Mediterranean Sea in an inflatable boat were at risk of drowning on Saturday, according to the sea rescue organization Alarm Phone. The aid organisation accused the Maltese government of ignoring their calls for help.

Alarm Phone received a distress call early Saturday morning with news that 110 migrants coming from Libya were at risk of drowning in the Mediterranean Sea. After 30 hours at sea, the travelers' inflatable boat has lost a significant amount of air, the organization said on Twitter. The migrants were in a rescue area under the jurisdiction of Malta at the time of their distress call.

The rescue organization tried to contact Maltese authorities overnight, but did not receive a response, they said.

A tanker moved near to the boat early Saturday morning, Alarm Phone added, but has since moved away without offering assistance.

"The people on board are panicking and the situation is getting worse," the organization warned.

The Maltese government has not commented on the situation.

Women and children aboard

Among the migrants are 10 women and three children, the Times of Malta reported on Saturday, quoting an Alarm Phone spokeswoman, who also said the boat had no fuel and was losing air.

The Maltese military said it is monitoring the situation but cannot provide any details, the paper wrote.

According to its website, Alarm Phone is a telephone hotline offering support to refugees in distress in the Mediterranean Sea. The organization does not carry out rescue operations itself, but instead draws attention to emergency situations at sea.