The Spanish Mediterranean island of Mallorca is particularly popular with German tourists — maybe even too popular, if you talk to some of its residents. How is Mallorca trying to control this "overtourism"? 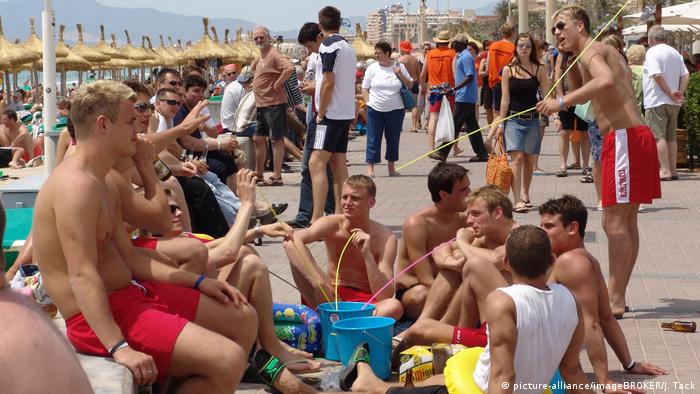 Joan Forteza is not afraid of people with authority. "He's sitting up there, the mayor," Forteza says, pointing to a window on the first floor of the town hall. "He sits there and just lets it happen."

The same scene takes place day after day under the eyes of the town leader: Every morning, the owner of a cafe on Palma's town hall square puts chairs and tables out on the cobblestone pavement, without bothering at all about how much space he actually is entitled to use. People in suits on their way to work, families with prams, and grandmothers with walking sticks — they all have to carve their way around the terrace seating while holidaymakers sip their cappuccinos at the tables.

Residents' well-being rather than mass tourism 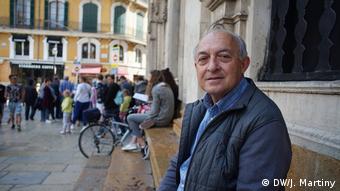 Joan Forteza on the town hall square in Palma

For the 68-year-old Forteza, it's an outrage. "We want the interests of the residents to be safeguarded in Palma," he says. "We don't just want to be tolerated here."

Forteza is chairman of the umbrella organization of the Palma residents' associations and one of the city's most outspoken civic activists. If necessary, he will take on anyone. His fight against the restaurant terraces symbolizes a feeling that is now widespread among the people of Mallorca: Many believe the excesses of mass tourism should finally be fought effectively.

Antoni Noguera thinks so too. The 39-year-old left-wing politician is the mayor of the island capital and could well be the son of Joan Forteza.

This morning Noguera is at the Playa de Palma, a long stretch of beach. Hundreds of thousands of Germans spend their holidays here year after year. For decades they have called it the "Ballermann" — a German derivation of the Spanish word Balneario, or bathing beach, which probably isn't easy to pronounce after a bucket of beer. For years, it has been synonymous with German style, raucous revelry and fun-in-the-sun. But the name "Ballermann" could become be a thing of the past if Noguera has his way, because it represents the kind of party tourism that Mallorca would like to abolish sooner rather than later. The new motto floating around Playa de Palma is "Palma Beach." A few dozen entrepreneurs have joined forces under this slogan to turn the tourist mile just outside Palma into a chic destination: Cocktails instead of binge drinking, chilling rather than a rave, ceviche instead of sausage rolls.

Today, in the presence of the mayor, plaques are placed to identify the "Palma Beach" restaurants. "We want Palma to be a successful city, but not a city that will be destroyed by its success," says Noguera. That's why this quality offensive is now taking place. But that's not all: In order to curb the excesses of party tourists, the local police plan are planning a crackdown this summer. To this end, the city council has declared the tourist mile a special area in which, among other things, alcohol consumption in the street is forbidden.

This is not the first time that Mallorca, one of Spain's Balearic islands, has tried to steer mass tourism towards a more orderly course. The Balearic government's flagship project in this legislative period was the introduction of the tourist tax. Since July 2016, holidaymakers have had to pay between 25 cents and €4 (0.28 US cents to $4.52) per night, depending on the season and the category of accommodation. Last year alone, the Balearic government collected almost €123 million. The money not only goes towards nature conservation, but also to the preservation of the cultural and historical heritage.

While most tourists reacted with understanding, the hoteliers ran up a storm against the levy, and the conservative opposition in the Balearic Parliament already announced that they would at least want to reduce the tax if they were to win the upcoming regional election at the end of May.

Tourism as a money maker 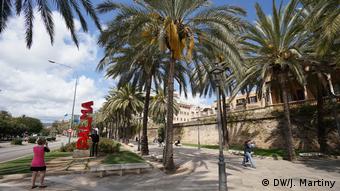 "Many on the islands live directly or indirectly from tourism," says Balearic Vice President and Tourism Minister Bel Busquets. Every tourist spends an average of €1,000 on the island, and two thirds of all employees live from the holiday business.

But Busquet argues that, "We still need to regulate these activities, especially as the islands have limited space and resources." Year after year, the island has set new visitor records. Twelve million holidaymakers came to Mallorca last year, including 4.3 million Germans.

That's one side. The other side is the increasing water shortage, a ever-growing mountain of garbage, overcrowded beaches and tens of thousands of rental cars clogging the streets in the summer months.

For example, traffic on the country road to the lighthouse on the Formentor Peninsula in northern Mallorca becomes gridlocked every day during the summer months. To prevent this, the access road to the lighthouse was closed to private cars last summer, and the same thing will happen this year. During the day, only shuttle buses will be allowed to take visitors to the popular excursion destination. 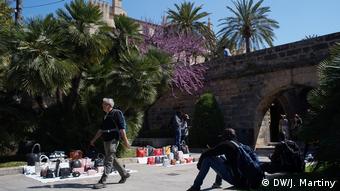 It can get crowded in the alleys of the old town. Above, street vendors show their wares below the Palma Cathedral.

Perhaps the most radical decision, however, relates to the rental of holiday apartments. In recent years the tourist accommodation on offer, especially in Palma, had grown so massively that islanders have hardly been able to find affordable apartments. So last year the city council decided to completely ban holiday rentals in multi-unit buildings. Incidentally, the change took place at the request of the residents' association, which had initiated a citizens' petition to this effect.

But Joan Forteza is still not happy. Instead, he is now at war with the cafe terraces. "I also like to sit outside and have a drink," he says. "But we need rules that apply to all."

He has already achieved his first success: The city council has started using yellow paint to mark the terrace area in front of every restaurant. All that is needed now is someone to check compliance and hand out fines to those not adhering to the new rule.