Mali's president has dissolved the constitutional court to calm major civil unrest in the crisis-stricken African nation, where thousands of protesters have been demanding the leader's resignation. 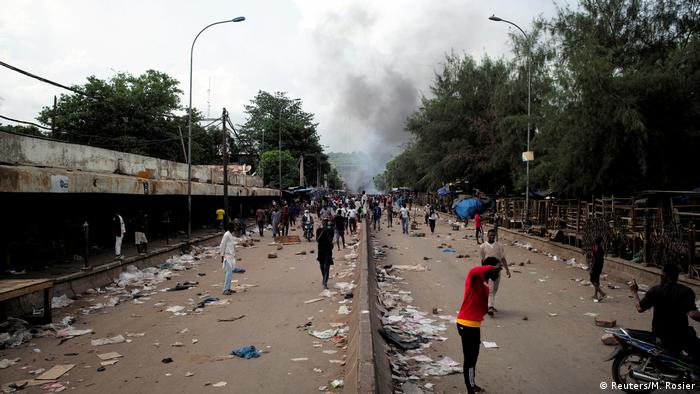 Mali's embattled President Ibrahim Boubacar Keita announced on Saturday the dissolution of the country's constitutional court. The move comes after civil unrest in the capital Bamako left four people dead on Friday and led to the arrest of several opposition leaders.

"I have decided to repeal the licenses of the remaining members of the constitutional court," President Keita said in a television address.

"This de facto dissolution of the court will enable us, from next week, to ask relevant authorities to nominate new members so that the reformed court can quickly help us find solutions to the disputes arising from the legislative elections," he added.

Mali's political crisis stems from recent actions by the constitutional court. In April, one month after parliamentary elections, the court overturned the provisional results of some 30 seats, which is said to have helped several members of Keita's party get elected.

Since then, the so-called June 5 Movement (5M) opposition group and the influential imam Mahmoud Dicko have protested against the president, demanding the dissolution of parliament and the creation of a transitional government.

Following the arrest of several of its leaders, the opposition group called on the public "to maintain and step up this mobilization until the aim is achieved, which is the resignation of the president."

They have called for citizens to employ civil disobedience, including actions like not paying fines and blocking roads or entrances to state buildings.

Meanwhile, President Keita warned on Saturday that his government would maintain security "with no signs of weakness," but he said he would have the willingness "to do everything possible to calm the situation."

The recent unrest in Bamako is a rare occurrence. Most of the instability in Mali has been felt in the north, which was seized by extremists in 2012, prompting a French intervention and a longer-term military presence of a 13,000-strong UN multinational mission.

Germany has pledged to expand its commitment to UN peacekeeping missions in the Sahel region of Africa, which has been ravaged by violence. Foreign Minister Heiko Maas called on other countries to join in the effort. (11.06.2020)