The West African country of Mali is on the brink of descending into chaos. A Touareg rebellion in the north and a military coup in the capital have destabilized the country. The tensions could result in war. 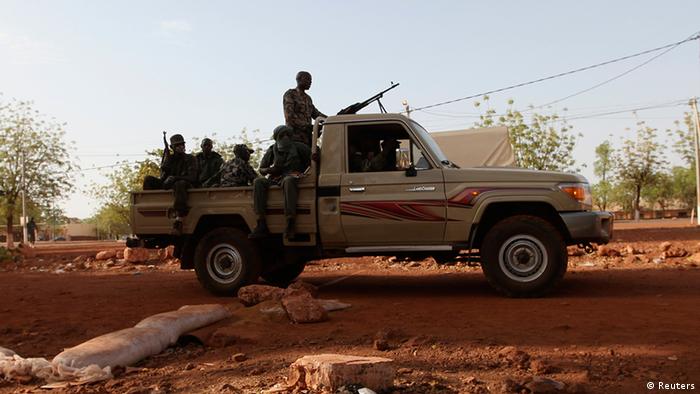 For a long time, the West has seen Mali as a democratic role model for the entire region. But for two weeks, the country is in chaos. It began on March 21 when soldiers meet in the capital Bamako to protest against the poor equipment they had to fight the militarily superior Tuareg rebels with.

The protests ended in a military coup toppling the government of President Amadou Toumani Toure. Since March 22, the leader of the coup, captain Amadou Sanogo, has been in power. The upcoming presidential elections that were scheduled to take place in April have been called off. 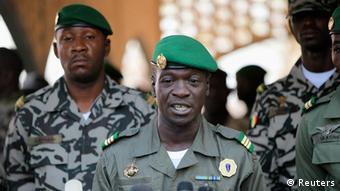 Mali's junta leader Sanogo has called off the upcoming elections

Journalist and North Africa expert Alfred Hackensberger has spent many years in Libya and is familiar with the region. He explains the situation in Mali by pointing to the aftermath of the fall of Gadhafi in Libya.

With the Libyan dictatorship collapsing, many of the Tuaregs that had served as mercenaries in Gadhafi's army have returned to their home in the north of Mali. Equipped with an abundance of arms, "they decided to capitalize upon their military superiority over the regular Mali troops and stage a rebellion," Hackensberger told DW.

The nomadic Tuareg are a Berber people living on a territory covering parts of Mali, Niger, Algeria, Libya and Burkina Faso. They see the governments of those countries as a danger to their nomadic way of life and have again and again fought for a separate state – so far without success.

In the present uprising, the Tuareg have managed to gain control over three Northern provinces of Mali: Gao, Kidal and Timbuktu. The rebels call the territory Azawad and are mostly organized in the Azawad National Liberation Movement (MNLA). The group's leader, Bilal Ag Acherif, has announced a ceasefire now the provinces are taken. 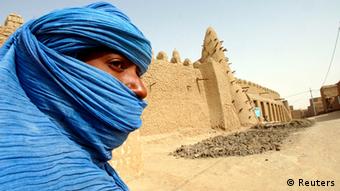 Touareg rebels have already taken Timbuktu and other northern cities

For Mali expert Hackensberger this does not come as a surprise. The rebels have achieved what they bargained for. "The Tuareg have conquered exactly the territory that they claim for their state. And they have said before that they would continue beyond that point," he says.

A second Tuareg group that has joined the uprising is called Ansar Dine. The Islamist group is believed to have contact with the terror network al Qaeda in the Maghreb. According to media reports, Ansar Dine have already set up a draconic and strict version of Islamic law in a number of the towns and cities conquered.

Yet the current rebellion is not primarily of a religious nature, says Hackensberger. "The Tuareg movement basically is secular." There might be some return to old religious traditions but "the overwhelming part of them are moderate Muslims," Hackenberger said. 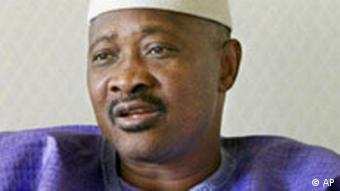 No matter how the power struggle between Mali's military and the Tuareg rebels will pan out in the end, it is the population that will continue to suffer most. The country is internationally isolated as a consequence of the coup.

The US has suspended the aid to their former ally and has expressed their support for ousted President Toure. France, too, has cut all aid. The EU's High Representative for Foreign Affairs Catherine Ashton has called on the military, to re-establish the "constitutional order" as soon as possible.

Unlike the European countries, Mali's African neighbors are already discussing a military intervention. The Economic Community of West African States (ECOWAS) appears to be working on plans for a military strike against the Tuareg rebellion in the north of Mali.

Media reports suggest that ECOWAS has already some 2000 soldiers on alert for the mission. French Foreign Minister Alain Juppe said Paris was ready to supply logistical support to the operation. Earlier in the week, ECOWAS implemented diplomatic and economic sanctions against the country. Mali already is one of the world's poorest countries and highly dependant on foreign aid.

Top generals from Mali's West African neighbors have convened in the Ivory Coast to discuss a possible intervention. A contingent of 2,000 troops has been put on standby, though it's not clear for what purpose. (05.04.2012)

The junta that seized control in Mali last month has been hit by a travel ban and asset freeze by the 54-nation African Union. The coup leader says constitutional order will return, but only after fundamental change. (03.04.2012)

Tuaregs continue their advance in Mali