The Malian soldiers who toppled President Ibrahim Boubacar Keita in a coup said Wednesday they planned to form a civilian transitional government to pave the way for new elections.

In a statement broadcast on state television, the mutineers identified themselves as the National Committee for the Salvation of the People.

"With you, standing as one, we can restore this country to its former greatness," the group's spokesman Col. Maj. Ismael Wague said.

Keita announced his resignation and the dissolution of parliament late Tuesday after rebel soldiers detained him at gunpoint. He said he was stepping down to avoid "bloodshed."

The putsch has been widely condemned by Mali's regional and international allies, who fear it could plunge the West African country further into chaos. The former French colony had already been battling a jihadi insurgency and months of anti-government protests.

Flanked by soldiers, Col. Maj. Wague said the committee had acted to prevent the situation from getting worse, and called on civil society and political organizations to join their cause.

"Our country is sinking into chaos, anarchy and insecurity mostly due to the fault of the people who are in charge of its destiny," he said, adding that borders were closed and a curfew would be imposed from 9 p.m. to 5 a.m.

Anti-government demonstrators took to the streets to celebrate the news of Keita's ousting, while a number of Mali's foreign partners voiced concern. 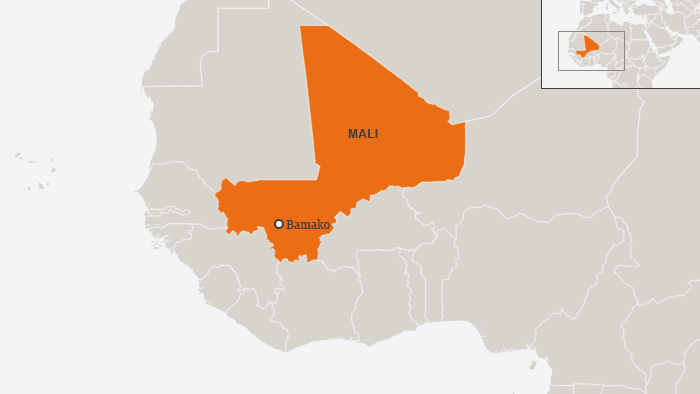 The rebellion began outside the capital, Bamako

Thomas Schiller of the Konrad Adenauer Foundation in the Malian capital Bamako told DW the coup had made the crisis "much worse than it was before."

"There are fears that the crisis in Bamako will also have a considerable impact not only on the security situation in Mali itself, but also on the entire Sahel region," he said.

"It is a tragedy that this political crisis has come to a head (in this way) in Bamako, thwarting any attempt to stabilize the country."

The Economic Community of West African States (ECOWAS) condemned the coup in a statement, saying it would close land and air borders to Mali and push for sanctions against "all the putschists and their partners and collaborators."

The 15-nation bloc, which includes Mali, also said it would exclude the country from its internal decision-making bodies.

The Foreign Minister of Niger, Kalla Ankourao, also expressed disappointment about the coup in Mali in an interview with DW. Ankourao is a member of the mediation team of ECOWAS, which is currently chaired by Niger.

"For us, this is a disappointment. For two months we tried to mediate and hoped that the Malian people would adhere to ECOWAS' guidelines, namely democracy and good governance. The [coup] was a brutal halt to the negotiations," Ankourao said.

The UN Security Council was due to hold a closed meeting later on Wednesday to discuss the situation.

EU Industry Commissioner Thierry Breton told Europe 1 radio that the European Union would push for elections within a reasonable timeframe and a democratic process that respected the constitution.

In a statement, China's Foreign Ministry said it was opposed to regime change by force.

Following a summit of EU leaders, European Council President Charles Michel described the situation in Mali as "worrying" and called for the "immediate release" of prisoners. German Chancellor Angela Merkel expressed the EU's support for ECOWAS' wish to find a political solution.

"We are committed to stability in Mali and to peace," Merkel said.

How the coup unfolded

Soldiers took up arms at a military base in Kati, a town 15 kilometers (nine miles) from the Bamako on Tuesday and began arresting senior military officers and civil servants.

Rebel troops surrounded Keita's private residence in the evening and fired shots into the air before taking the leader into custody.  Prime Minister Boubou Cisse was also seized. One of the prime minister's staff said the pair were being held at the army base in Kati.

DW learned earlier on Tuesday that several high-ranking politicians and officials were arrested, including Finance Minister Abdoulaye Daffe and the chief of staff of the National Guard.

The mutiny came after months of political crisis following the fallout from Mali's parliamentary elections. In March, opposition leader Soumaila Cisse was kidnapped three days ahead of the first round of votes.

On election day, the abduction of officials, trashing of polling stations and a deadly mine explosion marred the vote.

The second round of voting, in April, was disrupted in the country's volatile north and central areas. Later, Mali's constitutional court overturned the results of some 30 seats, a move that was advantageous for 10 candidates in President Keita's party.

In June, public anger at the government's handling of the elections spilled onto the streets of Bamako. The June 5 Movement - Rally of Patriotic Forces, known as M5-RFP, have held further anti-government protests, with many demanding Keita resign. Fourteen people were killed during protests in July.

Kati saw a mutiny in 2012 that led to a coup d'etat that ousted then-President Amadou Toumani Toure and contributed to the fall of northern Mali into the hands of jihadi militants.