Temperatures in Delhi are expected to hover around 44 degrees C until Sunday. Meanwhile, a large blaze has erupted at an enormous rubbish dump in the city's north. 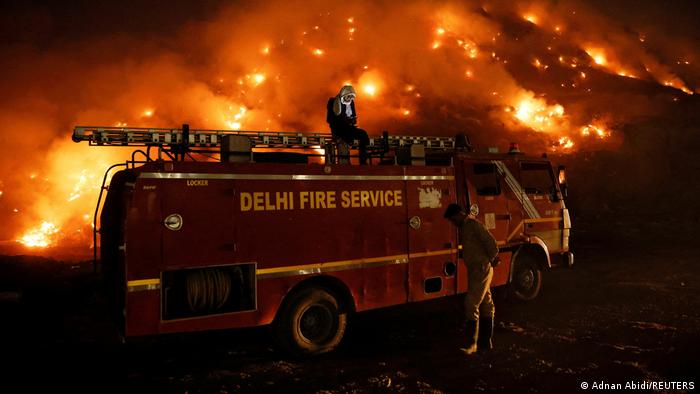 New Delhi was sweltered through a heat wave on Wednesday as smoke billowed out from a large fire at a rubbish dump.

Prime Minister Narendra Modi warned of the prospect of more fires as the mercury climbed earlier than usual across the country.

Temperatures in Delhi are expected to hover around 44 degrees Celsius (111 Fahrenheit) until Sunday. And peak summer heat is still to come before the monsoon rains in June.

"We are seeing increasing incidents of fires in various places — in jungles, important buildings and in hospitals — in the past few days," Modi said.

The typically humid eastern Indian states have been hard hit, with temperatures above 43 Celsius. The heat wave is almost certainly a consequence of climate change, according to climate scientists.

"Rarely it happens that nearly the whole country ... is reeling under [a] heatwave," hydroclimatologist Arpita Mondal at the Indian Institute of Technology Bombay told Reuters news agency.

Dr. Friederike Otto, senior lecturer in climate science at the Grantham Institute in Imperial College London told the Associated Press: "India's current heatwave has been made hotter by climate change."

She said that unless the world stops adding greenhouse gases to the atmosphere, such heat waves will become even more common.

The heat may also be exacerbated by urban pollution, with black carbon and dust absorbing sunlight and further warming the cities.

India is particularly vulnerable to the effects of climate change. A landmark report by the Intergovernmental Panel on Climate Change warned in February that with just 1.5C of warming, temperatures could expect an annual repeat of the 2015 heatwave, in which temperatures hit 44C and thousands of people died.

This March was the hottest in over 100 years of record-taking in India, and April has been similar. 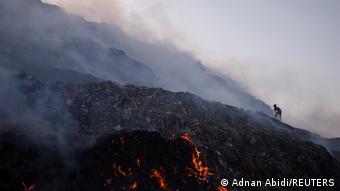 The dump covers an area equivalent to 50 football fields

On Wednesday, firefighters attempted to extinguish a fire burning at the massive Bhalswa landfill in the city's north.

The landfill — the same height as a 17-level building and covering an area more than 50 football fields — was meant to have been closed a decade ago. But more than 2,300 tons of garbage still get dumped there every day.

The acrid smoke has forced informal waste workers to endure even more dangerous conditions than normal.

"There's a fire every year. It is not new. There is risk to life and livelihood, but what do we do?" Bhairo Raj, 31, an informal waste worker asked the Associated Press.

In recent weeks, three other fires have broken further east at the city's biggest landfill.

Will the war in Ukraine delay India's green energy transition?