Fintech is increasingly significant within mainstream financial discourse. MoneyConf, a major conference on the topic, takes place in Dublin this week. DW's Arthur Sullivan reports from the event. 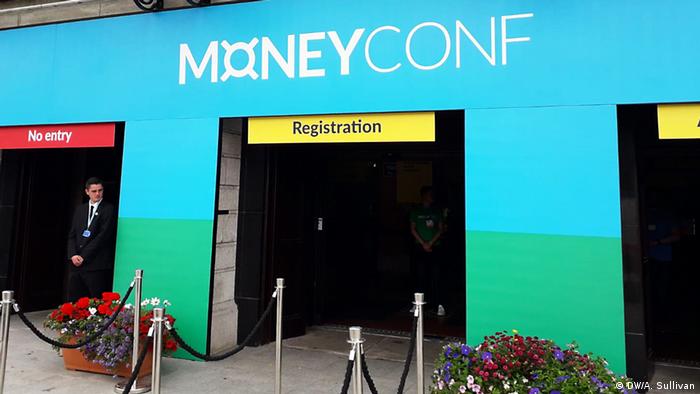 Blockchain, AI, Crypto. These are all concepts the uninitiated have quickly had to become initiated with in recent times as the world of business and finance rapidly moves into the realm of high technology.

Broadly speaking, all these new ideas and spheres come under the description of financial technology or fintech. Fintech can best be described as the broad church of new technology services which aims to compete with more traditional and conventional forms of financial services, an easy example being a cryptocurrency versus a conventional currency.

Those looking to develop a deeper understanding of a sector increasingly making headlines in the business pages could do worse than look to Dublin this week, where from Monday to Wednesday a major fintech-focused conference takes place.

MoneyConf, now in its fourth year, previously took place in Belfast and Madrid. It is organized by the same people behind the major internet technology conference Web Summit and their decision to move the conference for 2018 to the Irish capital — an increasingly significant fintech hub — followed the 2015 decision by the organizers to move Web Summit from its original Dublin home to Lisbon which prompted considerable gnashing of teeth in the Irish tech sector at the time.

Although not yet on the scale of Web Summit, MoneyConf is expecting more than 5,000 attendees over the next two days, including more than 700 CEOs from most of the major players in fintech. As well as executives from relatively recently established financial companies and newer startups, there will also be a strong presence from more traditional financial services players eager to show their tech credentials, such as Goldman Sachs, Visa, Deutsche Bank and Societe Generale.

Although most of those who will be speaking at the event — which takes place at the Royal Dublin Society (RDS), a large event space south of the city center — will not be especially well known to the wider public, many are major figures within the burgeoning fintech scene.

Among those attending will be Sarah Friar, the CFO of Square, an online payments company led by Twitter founder Jack Dorsey. She will deliver the keynote address, titled "Changing how the world buys" on Tuesday and the theme of evolving payment systems is a dominant one at this year's event with Stripe's Claire Hughes-Johnson, Circle co-founder Sean Neville and Visa's Ellen Richey among those also contributing.

Another central theme is blockchain and the general area of cryptocurrencies, a topic which has increasingly encroached into the mainstream of financial discourse as a result of the spectacular rise (and occasional falls) of Bitcoin and other cryptocurrencies over the past 12 months.

On Tuesday, Joseph Lubin, the co-founder of Ethereum, will deliver an address on the significance of his company, one of the largest public blockchains by value and the power behind the cryptocurrency Ether. Blockchain co-founder and head Nicolas Cary, Ripple's David Schwartz and Ledger CEO Eric Larcheveque are other significant figures from the cryptocurrency domain who will be attending.

The fintech scene: Looking for a good home

As one might expect from an event that bills itself as the biggest of its kind in the world, its scope is wide. There are dozens of talks scheduled across several key "tracks," from banking to commerce and retail, AI and machine learning to fraud and cyber security, credit and lending to wealth management.

Then, away from the lights and relative glamor of the main stage are the workshops and working group sessions. Perhaps the most significant dimension of the whole event is the networking opportunities it affords to investors and business people alike. Even allowing for a little hyperbole in the ebullient rhetoric of the organizers, this is a strikingly impressive collection of both minds and money; there will undoubtedly be a few significant commercial unions forged during these three days in Dublin.

A quick scan of the list of speakers and events lined up underlines the relative novelty of the event and the entire realm of fintech itself. A few short years ago, many of the central themes being parsed and discussed here were but fantastical dreams in the minds of their creators.

Yet they are now concrete components of a financial industry which was once notoriously impervious to new entrants and ideas. The financial crisis of 2007 and 2008 changed all that, and the fact that the likes of Goldman Sachs and Deutsche Bank are here illustrates the extent to which the sands beneath our feet are shifting.

Many inside and outside of the world of high finance have felt bewildered by the pace of change, and there undoubtedly remains plenty of uncertainty and ignorance over precisely what some of the much vaunted innovations do, and how exactly they will benefit society.

With its admirably slick presentation and open style of communications, an event like MoneyConf serves to illuminate what remains a potentially long and shady road towards some kind of settled future. If it is to be a success, it will leave us all feeling a little less in the dark.

Once popular only with startups, small and medium-sized businesses are increasingly turning to crowdfunding to raise cash. When they bypass traditional lenders, firms can get their money faster and without the red tape. (22.05.2018)