The Carnival Club's new coach Kasper Hjulmand has had a less than pleasant start to life in Germany. But the Dane had luck on his side with a last-minute penalty. Meanwhile, a late strike secured Gladbach a point. 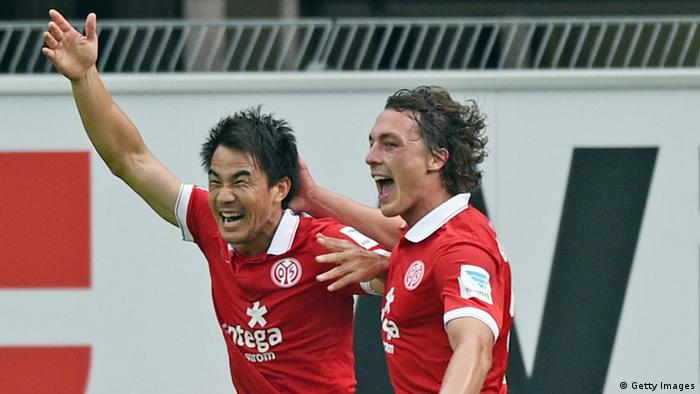 Paderborn, the 53rd club to play in the German top-flight, managed only a point in front of a 14,000 sell-out crowd and were leading 2-1 through Uwe Hünemeier's 86th minute goal.

However, it was the skipper who recklessly fouled Shinji Okazaki in the box to concede the spot-kick in the last of three stoppage time minutes. Andre Breitenreiter's are tipped to be the league's whipping boys this season, maintaining a squad on a budget of around five million euros. 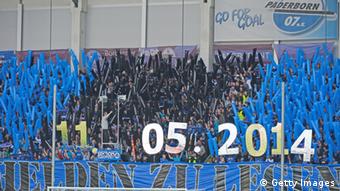 Paderborn were dealt an early obstacle before their season had begun, when center-forward Mahir Saglik picked up an injury in the warm-up and was replaced at late notice in the starting line-up by Stefan Kutschke.

The eleven home players, collectively, had just an hour of previous Bundesliga experience, while Kasper Hjulmand's side had 739 minutes. But for most of the match, Paderborn were the superior outfit, continuing the team-spirit and momentum from last season's promotion-winning campaign.

The two sides were battle-hardened and the opening half an hour could have been passed as a second-tier event. Mainz, however, were the side to draw first blood after 33 minutes.

Johannes Geis' dangerous free-kick struck the bottom of the post, leaving Okazaki the task of prodding home from four yards. The Japanese striker, who netted 15 goals last season, is now the joint-highest scorer from his country, level on 26 goals with Yasuhiko Okudera. 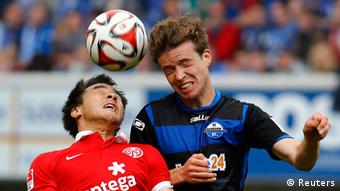 But five minutes later, Paderborn were level, courtesy of a swivel and finish from left-sided attacker Elias Kachunga who claims the honor of the club's first-ever Bundesliga goal.

The tale had been written prematurely, but the moment was one to savor for Paderborn fans. In the 87th minute, Marvin Bakalorz's long-range delivery was met powerfully by defender Hünemeier and the ball looped into the far corner.

It seemed like Hjulmand would fail again to unearth some luck for his side, as Okazaki came within inches of leveling in the 89th minute, his header hitting the woodwork.

But the Japanese forward was bundled over in the 93rd minute and South Korean midfielder Koo tucked the ball to dampen Paderborn's early season spirit.

In the final match of the weekend, Christoph Kramer celebrated his return to league action after helping Germany to their fourth World Cup win in the summer by leveling late in the match to claim a share of the spoils against VfB Stuttgart. 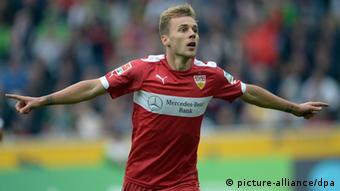 The 23-year-old midfielder steadied himself on the edge of the box, finding the bottom corner to earn a deserved point on the opening weekend. After a dull first 45 minutes, the game exploded into life after the half-time interval - and the points looked to have hinged on two guilt-edge chances for either side.

In the 48th minute, a hopeful cross from Traore was awfully judged by Stuttgart goalie Sven Ulreich and Hrgota passed up the chance to convert from a few yards out. The young Swede, perhaps, matching Wolfsburg's Junior Malanda when it comes to the glaring miss of the weekend.

Within 120 seconds, Stuttgart went up the other end and took the lead. Romanian Alexandru Maxim anticipated the loose ball and drilled a controlled right-foot shot past Yann Sommer. 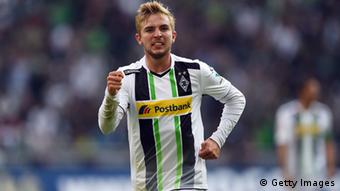 Kramer notched the equaliser for Gladbach

Young forward Hrgota had an evening to forget, as his finish in the 67th minute was from an offside position after a fine cross by Traore. The 20-year-old was hooked moments later and replaced by Belgian Thorgan Hazard, brother of Chelsea's Eden.

And the Foals prevailed after an intense period of pressure, eventually tying the match at 1-1 in the 89th minute when Kramer duly dispatched a lovely cutback from Alvaro Dominguez.