MacKenzie Bezos to give away half her fortune

The former wife of Amazon founder Jeff Bezos has pledged to donate half of her $36 billion fortune to charity. MacKenzie Bezos said she has "a disproportionate amount of money to share." 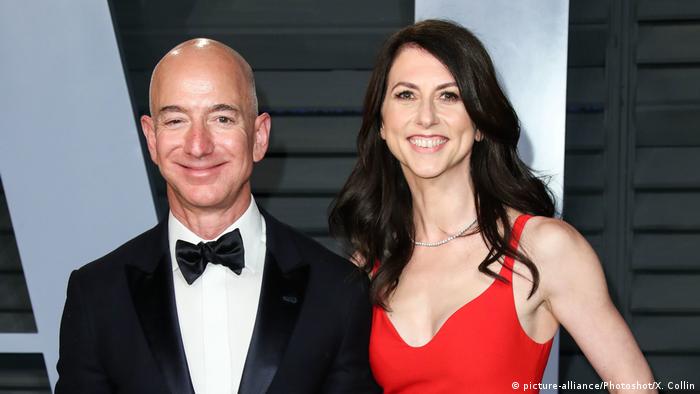 MacKenzie Bezos said Tuesday she planned to give away half of her multibillion-dollar fortune as part of a philanthropy campaign founded by billionaires Warren Buffett and Bill Gates.

Bezos became the world's third-richest woman in April when she and Amazon CEO Jeff Bezos announced that their 25-year marriage was over. After finalizing the divorce settlement, she received a quarter of the stock they owned and gained a fortune of about $36 billion (€32 billion).

Jeff Bezos, the world's richest man, was estimated to be worth around $130 billion at the time.

MacKenzie Bezos said in a statement that she has "a disproportionate amount of money to share" and her approach to philanthropy will continue to be thoughtful.

"It will take time and effort and care. But I won't wait. And I will keep at it until the safe is empty."

In the past, Bezos has supported causes including housing for homeless families, scholarships for undocumented immigrants, marriage equality and cancer research.

Her latest donation is part of the Giving Pledge initiative set up by Buffett and Gates in 2010. More than 200 people have signed up to the campaign by committing to give away at least half their wealth.

The founder of tech giant Amazon said, "It's time to go back to the moon." Riding a resurgent wave of interest in returning to the moon, Jeff Bezos said people could be transported there in the near future. (09.05.2019)

Jeff Bezos, the founder and CEO of Amazon, has committed $2 billion to support schools in low-income areas and help homeless families. This only months after the company resisted a similar effort by the city of Seattle. (14.09.2018)

Amazon CEO Jeff Bezos has accused the National Enquirer of blackmail, saying the tabloid threatened to publish intimate photos of him. The paper's publisher has said it will "thoroughly investigate" the claims. (08.02.2019)