Macedonia: A Colorful Revolution paint-bombs the regime | Europe | News and current affairs from around the continent | DW | 24.04.2016

Students are the face of Macedonia's Colorful Revolution, protests against President Gjorge Ivanov and his decision to pardon dozens of politicians. DW's Elizabeta Milosevska spent a few hours with students in Skopje. 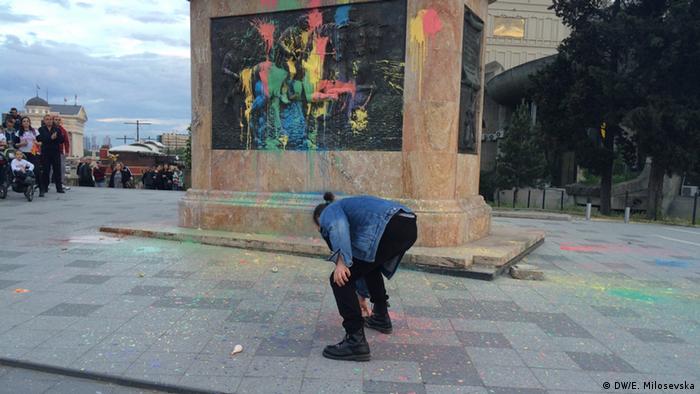 Outside the architecture faculty at noon, the student who identified himself as Stefan was tired. You could tell from his eyes that he hadn't slept properly for days. Despite that, he answered every phone call. A new day of protest had begun, and there was lots to organize.

"We have to pick up materials," Stefan said. Another student was waiting at the drama academy. Nobody talked much; everyone knew what needed to be done. The stencils were in one room, the sprays and pieces of cloth in another.

Back at the architecture faculty the courtyard was filling with students. Everybody brought something: paint, balloons, sprays - the ingenious weapons of the Colorful Revolutionaries, donated by kindred spirits or bought with donations collected during two weeks of demonstrations against the government of the former Yugoslav Republic of Macedonia.

The protests in the tiny Balkan state were sparked after the country's president, Gjorge Ivanov, pardoned dozens of politicians who were facing criminal charges for alleged involvement in a wiretapping scandal.

The young protesters were tired. They swapped stories about the previous night, and their eyes started to light up; the discussion quickly became very emotional. Have their demonstrations achieved their aims? What might be done better? How can the students maintain the dynamic of the protests?

"We have to write a placard about tolerance," someone said.

"A placard with a really strong message that everyone will understand," another student added.

"People are less and less afraid," a third said, "but the question is: How do we harness this fresh energy in society?" 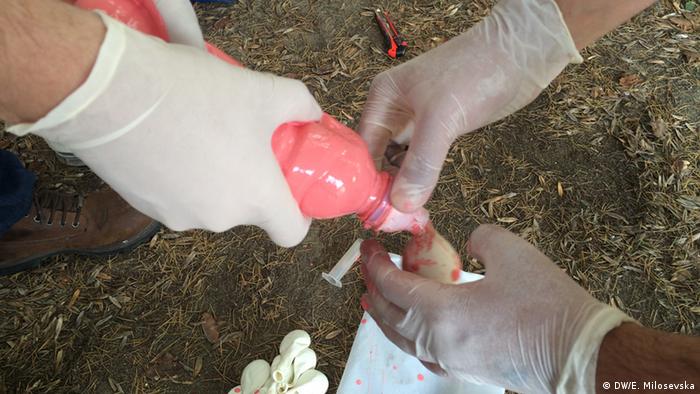 The intricate work of a Colorful Revolution

Two hours passed: Everybody made suggestions, but the debate ended without consensus. It was time to start producing paint bombs. Tasks were allocated. One group filled balloons with sand, while a second pours in the paint. "The balloons fly better with sand in them," someone said. The students worked with care.

Their shoes were covered in colorful stains, as were their clothes. "My mother doesn't think she'll be able to get the stains out," one student said. "I told her I'd wear them with stains," she added. "You have to make sacrifices for the Colorful Revolution." Then she went on filling the balloons with paint, aiming to add some color to the dullness of downtown Skopje.

In addition to 200 paint bombs, the students wanted to put hundreds of letters into envelopes, offering information about Macedonia's national debt and calling for more protests. More and more young reinforcements arrived.

At 6 p.m., the day's protests started as usual. It was going to be another long night.