Lyudmila Ulitskaya: ′Russian society may explode′ | Europe| News and current affairs from around the continent | DW | 18.05.2016

Russia is experiencing severe social and internal political conflicts. Life is tough for people there, acclaimed author Lyudmila Ulitskaya told DW. But how much freedom do Russians actually want? 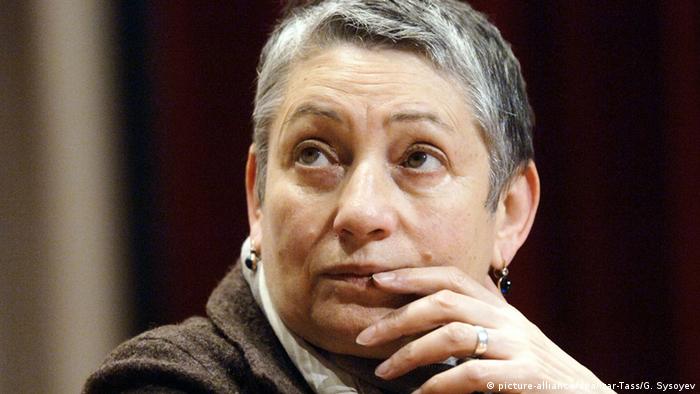 DW: Ms. Ulitskaya, in what state is Russia's "intelligentsia" today?

Lyudmila Ulitskaya: What we used to call intelligentsia no longer exists today. Educated people are divided into very different groups. Some intellectuals leave the country; others try to adapt to the situation. But the overall depressive mood equally affects the educated and less educated classes. I think that the "blessed" ratio of 86 percent for state supporters to 14 percent for those who are dissatisfied does not correspond to reality. I do not see this ratio among the people I speak to. I consider these figures to be a myth.

Is state power like weather - you have to adapt a bit so nothing bad happens to you?

As far as I'm concerned, I keep my distance from state power. That's why I am a fully independent person. Until now, I have succeeded in doing so but I don't know what will happen tomorrow. I will try to hold out in Russia because Russia is the focus of my interests. I spend part of my time abroad - right now I am in Italy - and the other part in Russia, where I will return at the beginning of June for a theater premiere. I am very attached to my country; that's just how it is.

Do you think Russia is interesting?

Incredibly interesting! I think it's one of the most interesting countries today. It is very dramatic; there are intense social and domestic conflicts. It's a source of real bitterness to see people living such hard lives. One day, someone will conduct research on this part of history and will be puzzled about the domestic contradictions and the difficult relations between state and society. It's really difficult, but it's nothing new for Russia.

Opinion polls can make or break a government but in Russia they are used very differently - as part of a strategy to manufacture consensus. Fiona Clark reports. (15.05.2016)

Keeping Russians in the dark

With 450 seats in Russia’s lower house up for grabs in September’s election, deputies are getting restless and looking for more ways they can stifle press freedoms. Fiona Clark reports. (28.02.2016)

Lessons in popularity from Russia's Putin

President Putin could write a handbook on "popularity for dummies," as his ratings continue to rise. In Moscow, Fiona Clark looks at how he's using textbook moves to win the hearts and minds of the Russian public. (25.10.2015)

Russia is said to be considering establishing a "patriotic" media holding company. The controversial move could be a new propaganda tool, or nothing but a business venture. (13.08.2015)

At the end of April, activists of the pro-Kremlin National Liberation Movement (NOD) stormed the award ceremony for a student history competition in Moscow that was organized by the Russian human rights organization Memorial. The NOD sympathizers also attacked you.

Students at the event had written wonderful essays about their family histories, their villages and their schools. Many of them were visiting the capital for the first time. They were the winners of a history competition. It was supposed to be a day to remember for all of them. And then suddenly, near the House of Cinema, a group of hooligans met them, cursed them and threw eggs at them. It was really horrible. I can wipe the green gunk off my face and go on with life. But the perpetrators, those poor, unfortunate and manipulated idiots, are no match for me. I also feel sorry for them because they, too, are our children. Part of this generation is on a terrible path. It hurts incredibly to see this.

It's difficult to prevent this from happening.

It is very difficult. The day after the incident, officials in the Kremlin claimed they had nothing to do with it. But all these guys have support and funding. Someone ordered their shirts from the World War II era. There are forces that feed them, and I suspect that people in the Kremlin do this. The investigations are not my problem. I can only say that the police was totally apathetic until the hooligans began throwing paint. It would be good to find out who funded it all. But I'm afraid that there is no authority that will investigate.

You once said that Russian state power is "idiotic and cunning" at the same time. How do you see it today?

Many things have been cunningly and successfully accomplished. For example, the annexation of Crimea was achieved brilliantly, without a drop of blood. But this fact does not make it any less idiotic because the consequences of the Crimean occupation will spoil the lives of several generations of our two peoples. I think that we are dealing with both great cunning and with great idiocy, simultaneously.

"Freedom is something difficult; you must want to learn it," you wrote. What did you mean by that?

Our society does not have an inner desire for freedom, and as long as this inner desire does not emerge, nothing can be done on the outside. If people are satisfied with the current state of affairs and the deterioration of living standards, and are prepared to tighten their belts even more, how can I help them?

Sadly, this situation will obviously reach a critical point someday. This can lead to a mass explosion. I would very much like to avoid this. But no one can rule this out in the present situation.

Lyudmila Ulitskaya is a Russian author and journalist. Her first collection of short stories was published in 1983 by the state children's book publisher in Russia. Her talent as a writer of prose was discovered in 1992 when her novella "Sonechka" was published. Her books have been translated into 17 languages.

The interview was conducted by Irina Chevtaeva.