Lviv remembers its Jewish past | Europe | News and current affairs from around the continent | DW | 05.09.2016

Residents of the Ukrainian city of Lviv are learning about and coming to terms with one of their most painful chapters: the annihilation of their Jewish community during World War II. 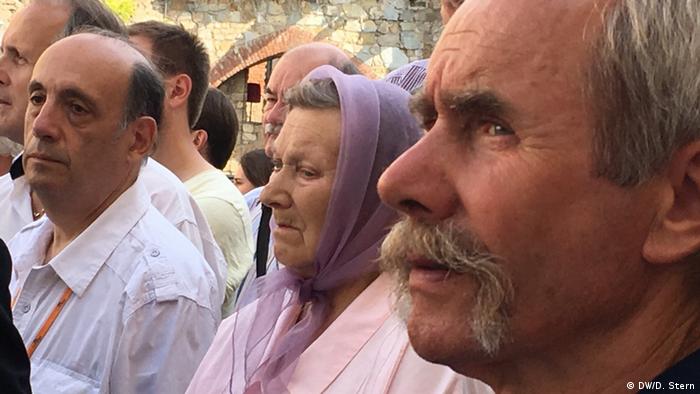 It's one of the paradoxes of Ukraine that some of the most horrific events in the history of the 20th century are often commemorated in the most idyllic of settings.

On Sunday, a few hundred people gathered among the quaint, narrow streets of Lviv's old city, under a cloudless sky, and remembered the Nazi-led destruction of the city's Jewish population - one of eastern Europe's oldest and largest.

The ceremony took place on a square that was once the spiritual heart of the community - where two of the city's biggest synagogues and the Beth Hamidrash, a "house of learning," stood. For years the site was a weed-strewn lot. Beer bottles and cigarette butts littered the ground where the 16th century Golden Rose Synagogue once was. On one of the remaining walls, one could make out the traces left by the ark of the Torah.

Now, however, the area is filled by a memorial complex, called "The Space of Synagogues" - the end product of an eight-year process to recapture the area, while doing justice to the magnitude of the loss.

Jews made up about one-third of Lviv's pre-war population, numbering more than 200,000. The Holocaust completely wiped out this community - only around 800 survived. 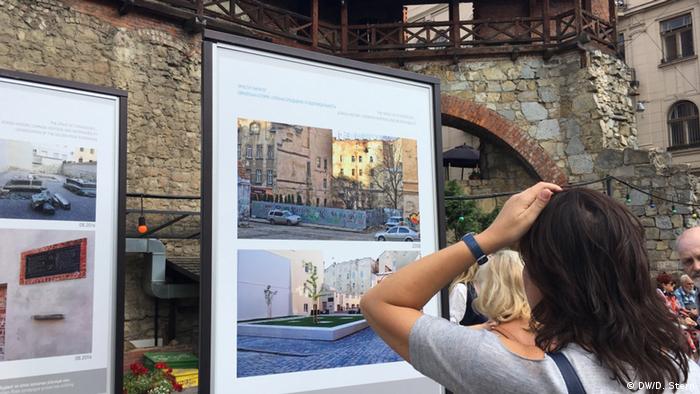 The site where the synagogues stood had been vacant for years

But it did more than erase lives - it obliterated much of the architecture and infrastructure that sustained Jewish existence and culture. Afterward, Soviet authorities demolished, commandeered or left to decay what few building were left over at the war's end. When Ukraine became an independent country 25 years ago, Jewish life was a faint shadow of what it once was.

The destruction extended to people's memories. Many Ukrainians are unaware of the vibrant communities that once lived among them, and how exactly they disappeared.

"I would say that our knowledge is weak," said Sophia Dyak, director of the Center for Urban History of East Central Europe, which sponsored the project with the Lviv city government, the German Society for International Cooperation (GIZ) and Jewish organizations.

"But the question is, what can you do?" she said. "Let's make the history visible - but how?"

To this end - to try to convey something that no longer existed - the project sponsors commissioned two German architects, Sophie Jahnke and Franz Reschke, from Berlin, who designed an open area with different installations. "We interpreted three separate atmospheres," Reschke said. 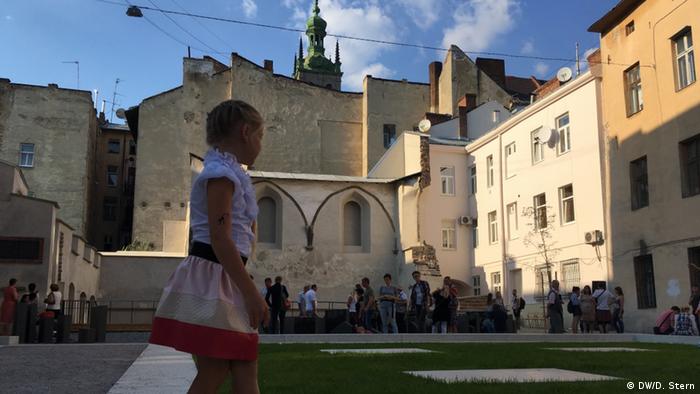 Grass covers the area where the Beth Hamidrash once was

For the Beth Hamidrash, he and Jahnke strove to convey "a vivid character and open spaces": A large grass square occupying the area where the building stood, with white stone blocks outlining its contours. The remains of the Golden Rose have been cleaned up but left standing as they were. "We wanted the authentic ruins, so that people reflected over the destruction of these buildings," Reschke said. And in the center of these two, is a structure called "Perpetuation," consisting of a line of irregular vertical stone slabs, etched with photos and quotes from Lviv's one-time Jewish residents.

"We wanted to show that there was a rich history before," said Jahnke. "But then, in the middle of the line, there's a space - this is when fear came. After that, the stones break down and get lower."

"There aren't quotes on the last stones - because the future is still to be written," she said.

Most of all, the complex is to be a place for education. Reschke and Jahnke say they strive to spark a discussion, between the country's various communities, as well as among ethnic Ukrainians themselves.

"We hope this installation won't be a place for a chat up and to drink a beer, but a place to reflect, think and get a dialogue started," says Reschke. 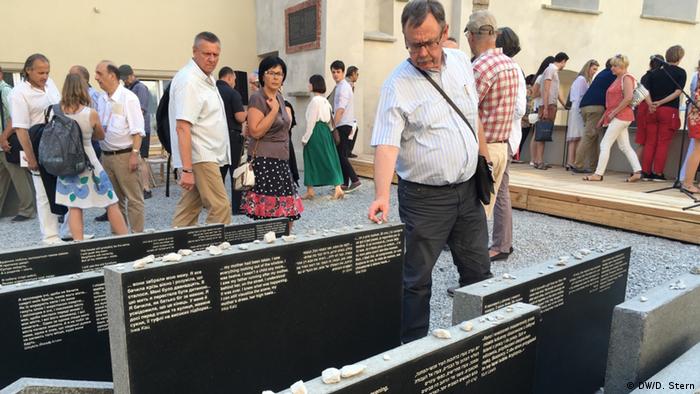 The process won't just be intellectual. "We want for people who live here to have a chance to learn - but also to learn emotionally, and this emotional knowledge can lead them elsewhere," said Sophia Dyak.

"Each place in Ukraine has a similar story," she added. "And Ukrainians who visit Lviv may be provoked to ask, 'What happened in my home town?'"

At the opening ceremony, seven decades after the events, emotions were still strong. Many in the crowd were noticeably moved. Afterward, onlookers - following Jewish tradition at gravesites - placed pebbles on top of the stone slabs of the Perpetuation installation.

Dr Leszek Allerhand, a Holocaust survivor, lived next to the synagogues. When he was 10 years old, German forces, with the help of police recruited from the local population, burned them to the ground. 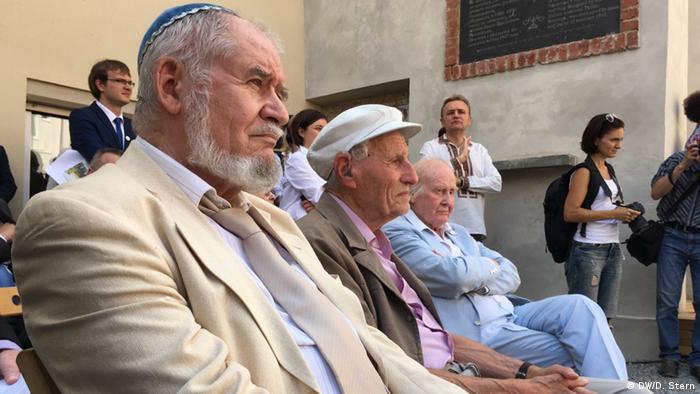 "Our apartment was five meters from the Great Synagogue," he said. "The police cordoned off the area, so there were no people there. Then German soldiers set the buildings on fire, and the smoke was so thick, you couldn't see anything."

Human rights groups accuse both the government and Russian-backed rebels in eastern Ukraine of secretly abducting and imprisoning civilians. David Stern in Kyiv looks at why some say this is only part of the story. (02.09.2016)

What purpose do days of remembrance serve? A culture of commemoration reaches ever fewer people, but history's evildoers must not be forgotten, DW's Robert Schwartz writes. (23.08.2016)

DW speaks to Rabbi Moshe Reuven Azman, one of Ukraine's leading clerics, who recently made a passionate plea to Russians to stand up against the Kremlin and protest the current war in Ukraine.

Russia announces expulsion of 40 German diplomats in tit-for-tat move — as it happened 26.04.2022

Russia's Foreign Ministry says it has made 40 German diplomatic staff "persona non grata." US Secretary of State Antony Blinken and Defense Secretary Lloyd Austin made a visit to Kyiv.