Luxury and Wellness in Hitler′s Alpine Nest | Germany| News and in-depth reporting from Berlin and beyond | DW | 08.02.2005

A luxury hotel is about to open near the spot where Nazi dictator Adolf Hitler once relaxed. Resort officials hope that fancy spa treatments and an exhibit about the Nazis will help overcome the shadows of the past. 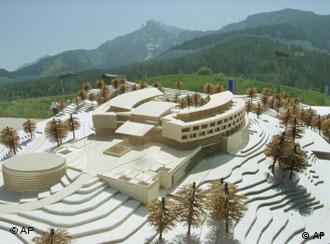 Hermann Göring lived on the site. Hitler wrote part of "Mein Kampf" here and had his own retreat built nearby. The Nazis made this alpine hideaway their second capital.

But on March 1, the British-owned InterContinental Resort will try and plant another reputation on the famous and infamous Alpine area of Obersalzberg -- that of luxury and wellness. Meanwhile, many are asking if the resort can or should, successfully do so. 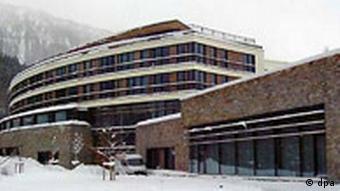 It's a moot point. The 135-room stone and glass complex with luxurious rooms and two-level suites is decorated with the carefully chosen art of Nazi-banned painter, Otto Müller, feng shui methods and alpine panorama. The hotel has installed modern ski lifts and offers a wide range of spa services including ones based on Aboriginal healing techniques and eastern massages.

The hotel is not trying to evade history but to accommodate it. The staff is available to answer questions on the history of the area and direct guests to the nearby Obersalzberg Documentation Center which narrates the region's history including its Nazi chapter.

Berchtesgaden attracted the top Nazi leadership such as Joseph Goebbels, Hermann Göring, Rudolf Hess and Albert Speer who vacationed in the mountains and planned the business of the government, including the murder of millions of Jews.

Besides their houses, the Nazis constructed a landing strip, bunker complex and green house to supply fresh vegetables. 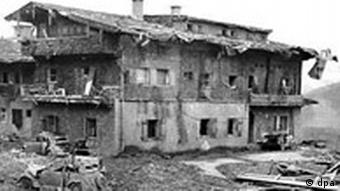 Hitler's "Berghof" lay in ruins after the war and was demolished by the US army in 1952.

Almost all buildings were destroyed during Allied bombings in 1945, except for the Eagle's Nest tea house, Hitler's favorite hangout. In later years, the area became a pilgrimage site for neo-Nazis marking Hitler's birthday.

These days, some critics are asking whether it is appropriately to have such facility on so infamous a site. 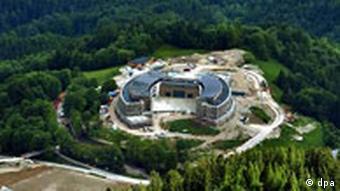 Bird's view of the new resort

"Yes," hotel director Jörg T. Böckeler told dpa news agency. "We, with this hotel, will begin a new tourist chapter in the history of Berchtesgaden."

"Either these people do not know what Obersalzberg stands for, which would be bad enough, or they know exactly and do it anyway," he said.

The Berchtesgaden Biosphere Reserve is a unique alpine environment that everyone hopes will survive the pressures of a changing world. (Jan. 8, 2004)

Several German lawmakers have called for a Europe-wide ban on Nazi insignia following widespread outrage after Britain's Prince Harry wore a swastika as part of a costume at a high-society gathering. (Jan. 15, 2005)