Lamb meat is popular in Armenia. It is used for many dishes - also for grilled kebab. Berliner Wahagn Ovasapian serves it with traditional Armenian bread, lavash, in his restaurant, Dwin.

Wahagn Ovasapian: "You choose the best elements of each culture."

Wahagn Ovasapian was born in Berlin as the child of Armenian immigrants. His parents placed a lot of value on teaching their children about Armenian culture, making sure they learned the language, and encouraging them to feel connected to their Armenian roots. 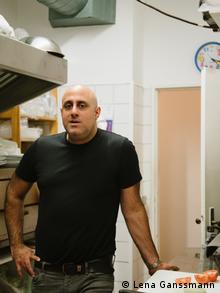 In 1989, Wahagn Ovasapian's father Samvel opened the restaurant Dwin in Charlottenburg-Wilmersdorf. Since then, it has become an institution – and not just among Armenians. While studying IT, Wahagn Ovasapian worked in his father's restaurant on the side, and in 2005 he joined the business as co-owner.

The family opened up the restaurant in 1988 in then West Berlin. It was the first in the city to offer authentic Armenian cuisine. Straightforward and down-home. Grilled food are the primary dishes on the menu as they are the Armenian specialty.

Finely grate onion and pour off onion juice. Combine meat, onions, and spices, mix, and knead into a mass. Tip: The meat should contain a fair amount of fat, as it helps the meat to adhere to the skewer and stops it from crumbling.

Distribute meat evenly onto skewers. If no metal skewers are available, you can also use wooden skewers, for example bamboo. The wider the skewer, the easier it will be to grill the kebabs.

Grill kebabs evenly from both sides and serve wth lavash, a traditional flatbread.

Editor's note: Unfortunately after nearly 30 years, DWIN had to close it's doors by now.