Borussia Mönchengladbach had a late goal disallowed as Inter Milan kept their Champions League hopes alive on a chaotic night. Gladbach now have to get a point at the home of 13-time champions Real Madrid to go through. 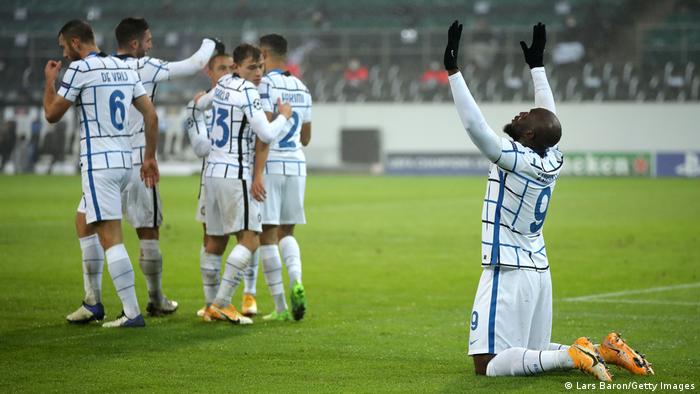 Borussia Mönchengladbach may come to regret this result. Their final home game of the group stage, albeit a tough one against Inter Milan, represented a fine chance to secure their place in the last 16. Marco Rose's side still only need a point from their final game to progress — but they'll have to take it from the Bernabeu. It seems nothing is guaranteed in this tightest of Champions League groups except entertainment.

Inter travelled to Germany knowing anything but a win would see them eliminated from the Champions League following Shakhtar Donetsk's shock win over Real Madrid earlier in the evening. Antonio Conte's side were understandably keen not to leave anything to chance and were more the aggressive and assertive of the two sides, but Rose's rope-a-dope tactics allowed Gladbach to be defensively efficient and brutally effective on the counter-attack. It made for a fascinating meeting of styles. 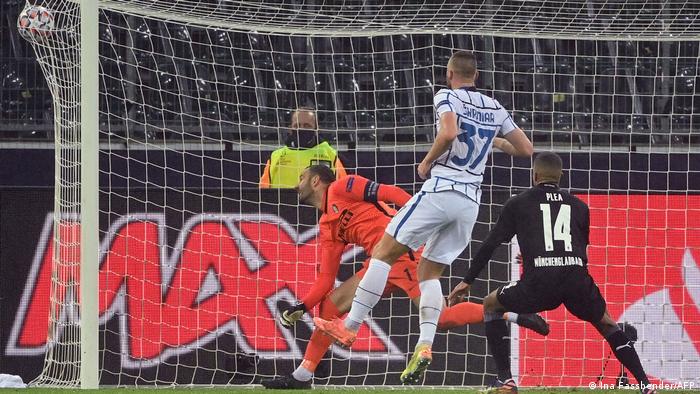 Plea scored two and thought he had a crucial third — but VAR intervened.

The key flashpoint of this five-goal thriller came in the 83rd minute. French striker Alassane Plea scored his hat-trick goal to cap another fine personal performance. But after some agonizing moments for Inter, whose Champions League hopes rested on this VAR review, the referee ruled that Plea's goal could not stand because of Breel Embolo's jump in front of the Inter goalkeeper Samir Handanovic, which obscured his view.

It was a contentious call that saw both coaches booked after a fiery exchange on the touchline, coming at the end of a scintillating and chaotic 90 minutes in the persistent rain in Mönchengladbach. There were 10 yellow cards and five goals, and the game ended with tempers fraying on the field. Rose approached the referee at the end of the game, seething at the decision to disallow Plea's goal.

Gladbach were playing catch-up throughout, but always had Inter in their sights. Matteo Darmian's low drive from the angle had put Inter ahead but Plea's free header from Valentino Lazaro's cross was perfectly timed, just on the stroke of half time.

Inter, who had imposed themselves a lot more than Gladbach, turned things up a notch in the second half, with Romelu Lukaku scoring two silky goals — the first a stunning early finish with his weaker right foot, the second a crisp finish to a razor-sharp Inter breakaway — which seemingly carried the game away from the Bundesliga team. The Belgian has now scored four goals in this season's competition, with all of them coming against Yann Sommer. But anything Lukaku can do Plea can do too, and his incisive finish following a mistake by substitute Alexis Sanchez suddenly had Gladbach back in contention, before the late VAR chaos.

Rose's side have been the dark horses in this group and could yet make it through, but he will have to inspire his side to earn a point against Real Madrid at the home of the 13-time champions. The visit of Inter on this sodden night in Mönchengladbach, and Gladbach's failure to sending the Italians packing, could yet come back to haunt Rose's side.