The stylized bird stays but the gray underside and yellow logo background are gone in favor of a purely blue and white exterior. The company plans to release full details of the new design on February 7. 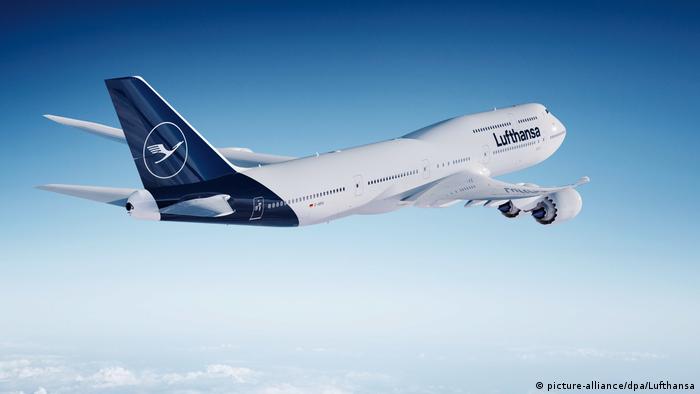 The first images of a new livery for Lufthansa, Germany's biggest airline and one of Europe's largest carriers, appeared online on Thursday.

Passengers saw the images rendered on a Boeing 747-8 in the new edition of the airline's onboard flight magazine and on the Aeronews.ro website.

Aviation journalist Andreas Spaeth posted a picture of Lufthansa group chief executive Carsten Spohr holding a computer image of the new look commenting "repainting 330 aircraft takes eight years" and "40 aircraft will have blue fins at the end of the year."

Lufthansa executives were in Cape Town for a conference on African aviation.

The new look drops the gray from the underside and engines and the yellow circle behind the company's 100-year-old crane logo on the tail for a purely blue-and-white exterior.

Spohr said the design was the "finishing touch" to the company's overall modernization drive. The crane has lost its yellow background

Customers will only see the traditional Lufthansa yellow on a welcome panel as they enter the aircraft, on their boarding passes and at check-in counters.

A new font will also be incorporated into the design, according to designer Ronald Wild.

The company is set to release full details of the new design on February 7 at an event in Frankfurt called #ExploreTheNew. Lufthansa used the hashtag on a tweet exploring the history of the fleet:

Germany's Lufthansa Group looks set to expand, even as some rival airlines cut back or fall into bankruptcy. It has set its sights on becoming a leading global player. But air travel markets remain fiercely competitive. (27.10.2017)