Still looking for their first win of the Bundesliga season, Cologne have signed veteran Peruvian striker Claudio Pizarro. Cologne are bottom of the table and have scored just one goal in six matches. 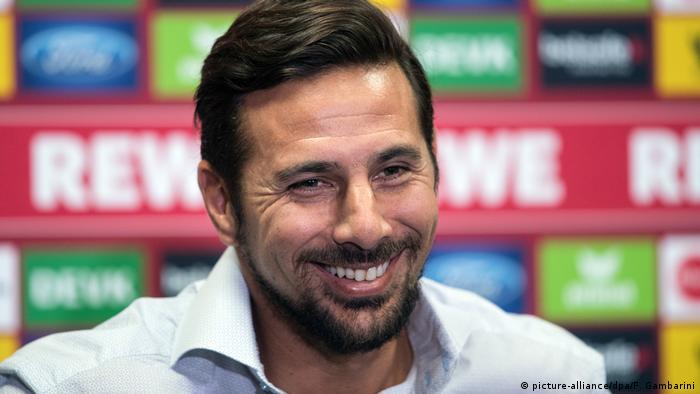 Cologne unveiled their latest signing at their pregame press conference on Friday, which had originally been meant to simply look ahead to Sunday's home game against Leipzig.

Claudio Pizarro, who was not offered a new contract by Werder Bremen after his last one expired at the end of last season, is the Bundesliga's top scorer among foreign players, having found the target 191 times for Werder Bremen and Bayern Munich. His 430 appearances are also tops among non-German players in the Bundesliga. The 38-year-old Peruvian, who turns 39 next Tuesday, has scored 20 goals in 85 appearances for his country. He has signed a contract with the Rhineland club, which runs until the end of the current season. No further details have been released.

"FC (Cologne) are a great club with a proud tradition, and given their current situation, I would like to help them out with my quality and my experience."

Cologne, who have scored just once in their first six Bundesliga matches will be hoping that he can recapture his form of two seasons ago, when he scored 14 goals in 28 matches for Bremen. However, his production dropped off sharply last season, when he sored just once in 18 appearances.

Coach Peter Stöger described Pizarro as "a striker who is a strong finisher and strong personality who will do this club good."

Due to the fact that Pizarro was a free agent and the contract only runs for the balance of the current campaign, this is seen as a low-risk move for the Billy Goats, whose summer signing from Mainz, Jhon Cordoba, has failed to find the target in the first six matches of the campaign.

Last season, Cologne rode Anthony Modeste's 25 goals to a fifth place finish and qualification for the Europa League. However, the most productive season of the Frenchman's career generated interest abroad and in the summer transfer window, Cologne sent the 29-year-old to Chinese outfit Tianjin Quanjian for a reported €6 million ($7.1 million) on a two-year loan, with an option to purchase for €29 million.

Cologne have also had trouble scoring in the Europa League, finding the target just once in their first two group-stage matches.

Cologne's sporting director, Jörg Schmadtke, also used the press conference to announce the club had released another striker, 29-year-old Latvian Artjoms Rudnevs. Schmadtke said that the move had come at the urgent wish of the player, who wanted to be free to deal with some "personal problems." He declined to provide further details.