Plummeting oil prices have forced producers to suspend multibillion-dollar projects and call off the search for new fields. Analysts say OPEC will have to stop drilling to stabilize the market. 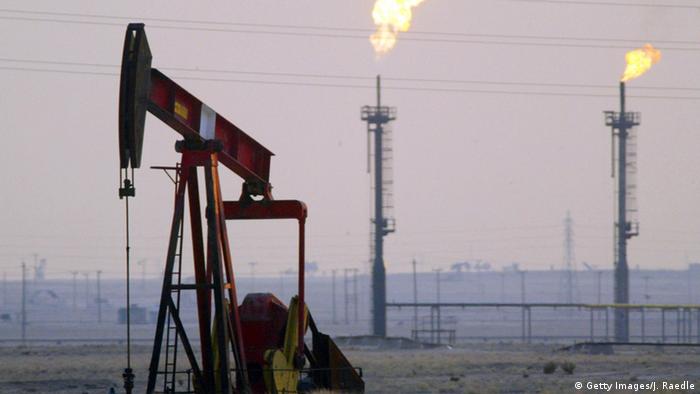 It's cheers vs. jeers on the oil market these days, as the steep drop in barrel prices has pitted producers against consumers. While the latter is looking forward to lower energy bills, the former could be looking at multibillion-dollar losses.

Plunging prices could force oil and gas companies around the world to halt exploration projects worth more than $150 billion (121.2 billion euros) next year, according to estimates by Norwegian consultancy Rystad Energy.

"The [exploration and production] companies have been under a large pressure the last years due to galloping costs, and the result have been delayed and cancelled projects, reducing their investment commitments," said Rystad in a statement.

On the one hand, the companies have been forced to pump hundreds of millions of dollars into new projects to access hard-to-reach oil reserves, with older oil fields drying up. It typically takes up to five years and billions of dollars before companies see the first drop of oil from new fields.

On the other hand, global oversupply - driven by a U.S. shale extraction boom - has sent barrel prices diving by 40 percent since this summer to around $70 a barrel. Analysts expect that to inch up to an average of $82.50 next year - still nowhere near what's needed for some producers to see a viable return on investment.

"[Little] doubt remains that a sustained $80 oil price will have significant negative effects on the markets, and that drillers will have to be even more patient in their wait for better days," Rystad cautioned.

The uncertain outlook has led several companies to take precautionary steps. One of the world's leading oil and gas firms, Total, has decided to suspend development of its $11-billion Joslyn oil sands mine in Canada due to high costs, said Bertrand Hodée, a research analyst at Raymond James.

In the Barents Sea, Statoil is expected to delay work on its Jonathan Castberg field, given projected costs of up to $19 billion, according to Hodée.

The analyst said he suspected any offshore project with development costs exceeding $30 per barrel would be scrapped under the current conditions.

If the oil price plateaus at $80, Rystad said he "expects the [oil field service] purchase growth to fall from 4.5 percent to 3.5 percent year on year towards 2020."

Rystad Energy warned that continuing current rates of US shale production would "cause an increasingly severe over-supply situation ahead."

To stabilize the market, Rystad said OPEC members must reduce output to at least 29.5 million barrels per day (bpd) - reversing the current price trajectory would require a cut to 29.0 BPD.

"OPEC faces a dilemma. A voluntary cut in supply will support oil prices and likely improve member countries' revenue. However, it will also ensure strong growth from US shale drillers and other competing producers while reducing OPEC's market share in the medium term," , Rystad said.

The Organization of Petroleum Exporting Countries (OPEC) has decided not to reduce oil production, despite a huge oversupply in world markets. The move caused global oil prices to drop further. (27.11.2014)

Oil prices have slumped recently as the world's biggest oil producers refuse to cut output. The drop is undermining the US shale oil industry's profits, soon after it made the US the world's number 1 oil producer. (25.11.2014)

OPEC was not expected to agree on reducing oil production. DW's Henrik Böhme wonders what kind of authority the institution still holds. (27.11.2014)