Loveparade stampede: Ten years later and the blame game continues | Germany | News and in-depth reporting from Berlin and beyond | DW | 23.07.2020

Twenty-one people were killed, hundreds injured. No one has been held accountable after a trial ends without a verdict. How could this be? A new documentary sheds some light on the matter.

Christian from Germany was 25 years old, Clara from Spain was 22 and Giulia from Italy was 21 — they were among the 200,000 young people attending the "Loveparade" techno music festival in the western city of Duisburg on July 24, 2010.

Twenty-one men and women from Germany, Australia, China, Italy, The Netherlands, and Spain lost their lives when they were crushed to death in a narrow tunnel leading to the site. 652 were injured, many more left traumatized.

Read more: The businessman behind the ill-fated Love Parade

Who is responsible for this tragedy, which took place in Germany, a country with high safety standards?

Hannelore Kraft, who was premier of North Rhine-Westphalia (NRW), the state where Duisburg is located, promised solemnly to establish who was responsible.

Christian's, Clara's, and Giulia's parents were among the 60 co-plaintiffs in the trial that began in 2017, in which six city officials and four representatives of the festival organizer LopaVent were charged with negligent manslaughter and causing bodily harm.

The trial was so large that it was moved from the Higher Regional Court in Düsseldorf to the city's exhibition hall.

The court said the remaining defendants were only suspected of minor guilt and that the trial might not be complete before the statute of limitations expired. The coronavirus' impact on public life made an already tight timetable untenable, the court said.

Years of torture for parents and defendants

To coincide with the 10th anniversary of the tragedy, the new documentary "Loveparade. The Trial" has been released.

Film director Dominik Wessely and scriptwriter Antje Boehmert attended all 184 days of proceedings. They interviewed victims, judges, prosecutors, defense lawyers, expert witnesses, defendants for their documentary, which offers a multi-faceted view on this legal endeavor to establish facts and responsibility. 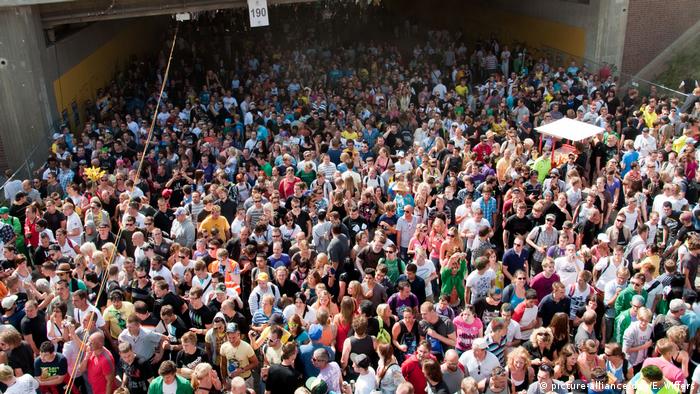 The Spanish-German documentary begins with a tracking shot through the tunnel to the festival venue, a former railway yard. It shows a ramp at the narrow tunnel entrance — the only entrance and exit point — which became a lethal bottleneck.

In an effort to prevent people from entering the overcrowded site, police at the exit of the tunnel began instructing new arrivals by loudspeaker to turn back inside, while people continued pushing on into the confined space from the rear.

Christian, Clara, Giulia, and the others were crushed to death here, they died of suffocation.

"I am not seeking revenge," Christian's mother, Gabriele Müller, says on camera on the first day of the trial, she says she just wants to find out what happened so she could find her peace. 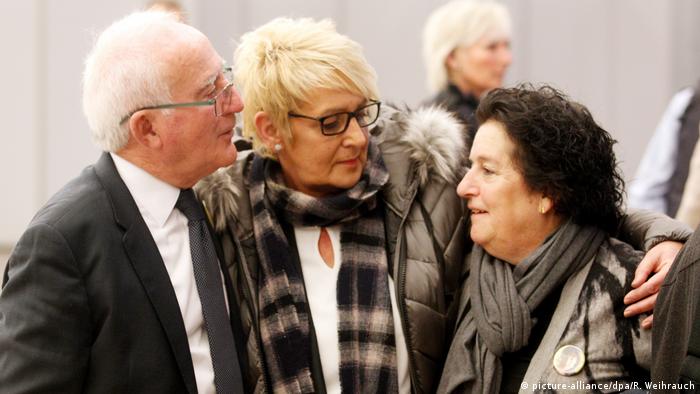 Clara's parents, Francisco Zapater und Nuria Caminal, have traveled from Tarragona in Spain. They each have a photo of their daughter pinned to their jackets as they enter the courthouse on the first day.

Clara's father tells journalists about the day they got the message of their daughter's death, how they had to identify the body, and take her home in a coffin.

A few months into proceedings he says that such a lengthy trial was  "real torture, not just for the victims, but also for the defendants."

Clara's parents were among the many who would have liked to have seen the mayor of Duisburg and the owner of Lopavent, the company organizing the event, stand trial.

But both of them were called only as witnesses, denied any responsibility, and stressed that they had not been involved on the ground.

None of the involved organizations or officials took the blame for the disaster; instead, they accused each other: The festival organizer accused the police of mistakes in crowd control. The NRW state interior minister stood by the police force, assigning all the blame to the organizer's security concept and the festival personnel.

There was public anger against Mayor Adolf Sauerland,who was seemingly aware of substandard security provisions for the festival but pushed his administration to approve the plans anyway.

"Good morning, please take your seats." Every trial day begins with this greeting by Judge Mario Plein. In Germany, proceedings in the courtroom may not be filmed, so the makers of the documentary had actors read out testimonies from court documents and conducted interviews with observers. This is how they created an intense chronology of the trial. 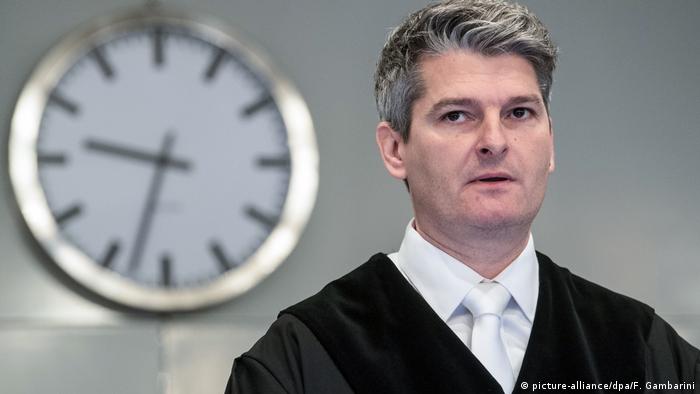 Jürgen Dressler headed the construction department of the city of Duisburg in 2010. This was the office that gave the go-ahead for the festival to take place in the city's former railway freight yard, although there had been early warnings that the venue would not be able to accommodate all the partygoers.

Dressler is the only high-ranking city official who ended up in the dock. He stood accused along with five of his co-workers.

It was only when the pictures and videos of the tragedy were shown in court, that the whole thing became real for him, he says.

"I sat there and cried," he recalls. He says the pictures showed events that should never have taken place.

Dressler was one of seven defendants who accepted a deal in 2019 to pay fines in exchange for all criminal charges against them being dropped.

The three remaining defendants refused to take such a deal, saying they wanted to be acquitted in court. 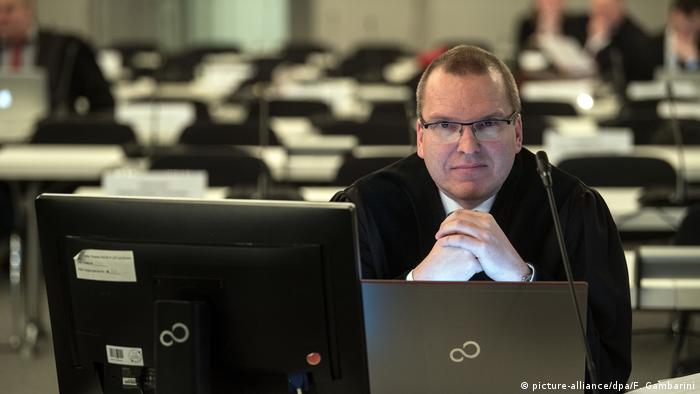 Around 3,200 police officers were on-site at the festival, they were responsible for crowd control. Torsten Meyer was one of them. He testified as a witness, describing how phone lines and the internet kept breaking down, making it hard to liaise with the organizers, hard to gauge how many people had actually arrived and impossible to steer the masses. He recalls looking down from the top of a staircase thinking it looked "dangerously crowded, but not deadly."

When another officer said she could see dead bodies, he thought she must be mistaken. Later he was unsettled by the thought that he actually watched people die, "but I couldn't see it," he says.

He says it means a lot to him to be able to speak in court because he wants to tell the victims he's sorry. "I have children of my own and as a police officer I want to make sure people are safe," he says.

Jürgen Gerlach is a road safety expert. He confirms that there would have been a life-threatening congestion at the entrance of the tunnel even without the police cordoning off some of the routes. The fenced-in venue with the narrow entrance and exit were simply not suitable for such an event, he concludes.

When in May 2020, the trial ended without a verdict, the court issued a 44-page document explaining that it had not been possible to prove the criminal responsibility for any of the individual defenders.

Prosecutor Uwe Mühlhoff says all those who knew of the risks, but let things go ahead anyway, hold an "ethical responsibility." He says there had been "organized irresponsibility" around the event in Duisburg, where many people were involved in the planning, but in the end, it was totally unclear who was actually responsible for what. 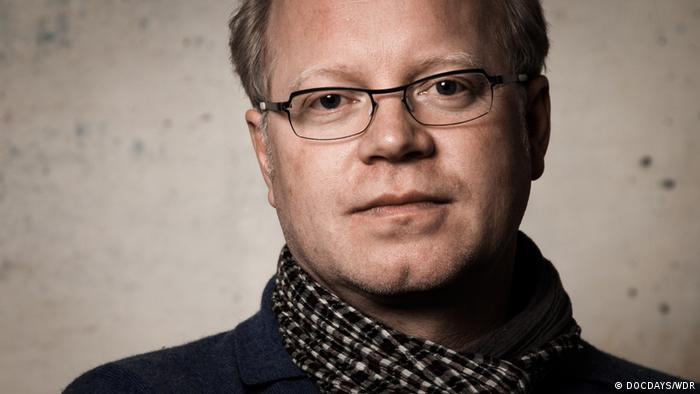 "There are no simple answers," film director Dominik Wessely tells DW. The end of the trial must be unsatisfactory and difficult to accept, he adds.

Right before the tenth anniversary of the tragedy, the NRW parliament voted to increase the compensation payments for the victims. A commission is to be established to rework the regulations for big events and come up with guidelines to facilitate the analysis of them — measures which lawyer Julius Reiter describes as "a necessary reaction to the disappointing end of the trial."

"If guilt can not be proven in court, that does not mean there is no moral responsibility," former NRW State Premier Hannelore Kraft said in parliament that day. She read out all 21 names of the victims. She wants to send a signal to survivors and victims: "We are asking for your forgiveness."