As France appeals for cultural asylum for Middle Eastern antiquities, the Louvre-Lens is putting them on show. But a good part of its collection was acquired through unethical circumstances during the colonial era.

Mesopotamia is where the biblical Garden of Eden is said to have existed. The region was the birthplace of the first cities, the first dynasties and the first kings. Instead of gathering berries and hunting gazelles, our ancestors there tilled the land for the first time and tamed animals to work for them.

Achievements that were made between the Euphrates and Tigris rivers in what is modern-day Iraq, Kuwait and Syria still have an impact on our lives.

Today, war is being waged in the region. The so-called "Islamic State" (IS) has claimed most of the land between the two rivers. It has sold some of the region's archeological treasures to finance itself, and has destroyed others, such as the ancient cities of Nimrud and Nineveh near Mosul - both important Mesopotamian cities.

Last year, French President Francois Hollande responded to the destruction in the Middle East by calling for asylum for cultural goods. The director of the Louvre, Jean-Luc Martinez, was commissioned to develop a plan. 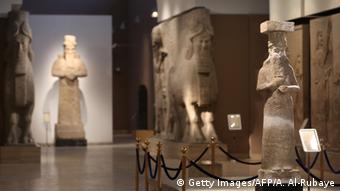 The recently reopened National Museum of Iraq collaborated with the Louvre

One of the ideas mentioned in the resulting 50-point proposal was the exhibition "History Begins in Mesopotamia," which was curated by Ariane Thomas and is being shown at the Louvre-Lens from November 2 to January 23.

But the goal of protecting cultural goods in crisis regions has not been fulfilled in the exhibition - most of the 400 exhibits on show were not rescued from IS, but came from the Louvre's own collection. Archeologists from Iraq and Syria came to the Louvre to participate in creating the exhibition and receive educational training. Thomas worked closely with Bagdad's new National Museum of Iraq, in particular.

She told DW why the Louvre never considered asking for loans from Iraq. "Our Iraqi colleagues reopened the Iraq Museum in Baghdad with great effort as an answer to the massive destruction in Mosul," she said. "A museum which has just reopened has many security issues, and they have forbidden antiquities from leaving Iraqi territory."

Built on an imperial foundation

The antique stone slabs and sculptures now on show at the Louvre-Lens, waving a flag for humanity, have a dubious past. Although the Louvre is now proud to have them in its collection, they were dug up around 170 years ago in what was then the Ottoman Empire and brought to France largely without compensation.

"Most archeologists in Ancient North Eurasia did not bother too much with getting permission to dig and export artifacts in the 19th century," Frederick Bohrer, a professor of art history at Hood College in Maryland, told DW.

Archeologists from England, France and Germany used the power of their vast empires to get what they wanted, he added. "There can be no doubt that archeologists benefited from the colonialist and imperialist positions of their home countries, which treated archeology as a lesser bit of national interest."

France, Great Britain and later Germany expanded their global influence in the mid-19th century, exploiting natural resources and people in other countries and forcing them to adopt their Western values. Their conquests - including those in the relatively new discipline of archeology - were based on the belief that their European civilization was superior to local cultures. 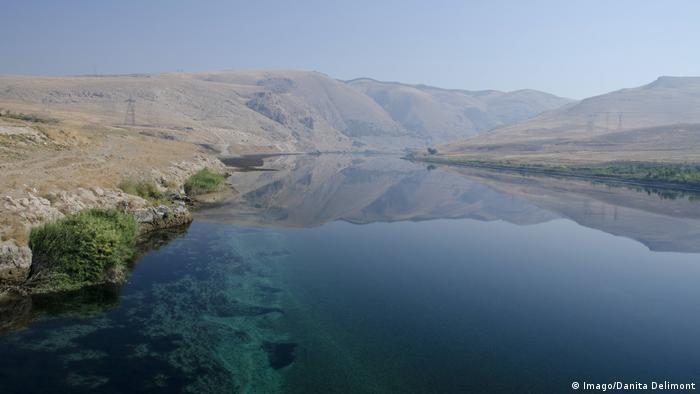 The Euphrates River once marked the western border of Mesopotamia

In 1842, French diplomat Paul-Émile Botta became the first to uncover the "cradle of humanity" - ancient Mesopotamia. He sent his discoveries to the Louvre in Paris, where they were proudly displayed. Many of his findings can be seen in the current exhibition "History Begins in Mesopotamia."

Like Botta, many of the early archeologists were also government officials, explained Zainab Bahrani, professor for ancient Near Eastern Art and archeology  at Columbia University in New York. "Archeology as a European scientific discipline has always been closely tied to political interests."

Judging the past through lens of today

Archeology soon became a race among the imperial powers to fill their museums and secure control of valuable locations. All early archeologists viewed these ancient sites as part of their Western heritage and felt they had sole claim to them, explained Bahrani.

The Louvre and the British Museum in London quickly found themselves vying against each other. Later, Germany also got involved with the discovery of ancient Babylon in the late 19th century, finally proving it could compete eye-to-eye.

"Sometimes we judge periods by our criteria a little too quickly, although times have changed," said Thomas, curator of the Mesopotamia exhibition. "We would never do what Paul-Émile Botta did, but from another point of view, we also work because some guys like Paul-Émile Botta were curious in the 19th century.

"We rediscovered an incredibly long past also thanks to this first try, but of course we wouldn't do it the same way now," she added.


At the Louvre-Lens, two deep blue lapis lazuli eyes peer out from the alabaster face of Ebih-Il, a statue of an official from the 25th century B.C. The praying man sits among 400 other exhibits that promote President Hollande's cultural asylum scheme. It almost looks like he's pleading for better times for antique art in the Garden of Eden.

Mesopotamia: Where history got its start

The land between the Euphrates and Tigris Rivers in the Middle East is one of the cradles of Western civilization. Many inventions from the regionn are still with us - though we're often fully unaware of their origins. (23.11.2016)