Architect I.M. Pei, one of the most famous and prolific architects of the 20th century, has died at the age of 102. He was best known for his renovation of the Louvre in Paris, which at first attracted huge criticism.

Architect I.M. Pei, who found fame employing a modern style on numerous high-profile projects over more than six decades, has died at the age of 102, the New York Times reported Thursday.

The Chinese-born Pei — who masterminded construction of the Louvre pyramid as part of the art gallery's extensive renovation in the 1980s — was said to have died overnight.

The son of a prominent banker in China, the young Ieoh Ming Pei moved to the US in 1935 to study architecture at the Massachusetts Institute of Technology and Harvard University.

After teaching and working for the US government, he started work for a New York developer in 1948 and opened his own firm in 1955.

Pei's portfolio included museums, public buildings and company headquarters around the world, including the Bank of China Tower in Hong Kong and the Athens' Museum of Modern Art.

However, it was Pei's work on the Louvre that proved most controversial and memorable.

His selection for the project proved controversial from the very beginning, with many surprised that a French architect had not been chosen. Pei also had no prior experience with historic buildings.

His futuristic 21-meter-tall (70-foot) steel-framed, glass-walled pyramid at the museum's grand entrance — with three smaller pyramids nearby — was detested by many French critics. However, it also won praise for successfully embracing modernity in a setting that was grounded in history. 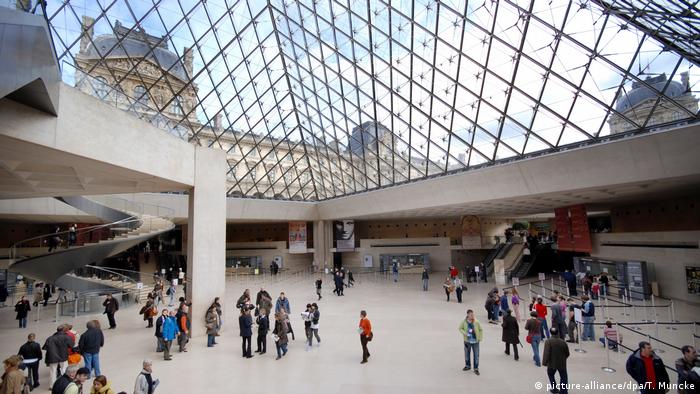 ​​​Pei successfully blended the Louvre, parts of which date to the 12th century, with modernity

'Lasting architecture has to have roots'

Despite the modernity of Pei's work, he himself said that tradition was important as a frame of reference.

"I understand that time has changed, we have evolved," said Pei. "But I don't want to forget the beginning. A lasting architecture has to have roots."

Although he formally retired from his firm in 1990, Pei was still accepting projects in his late 80s, such as museums in Luxembourg, Qatar and his ancestral Chinese home of Suzhou.

I. M. Pei has left his mark across the globe, with his signature style embodying the spirit of modernism. We take a look as some of his most iconic structures as he celebrates his 100th birthday on April 26. (26.04.2017)