Mexican President Andres Manuel Lopez Obrador has comfortably a won a plebiscite on whether he should step down or complete his term. However, the vote was marked by very low turnout as the opposition boycotted it. 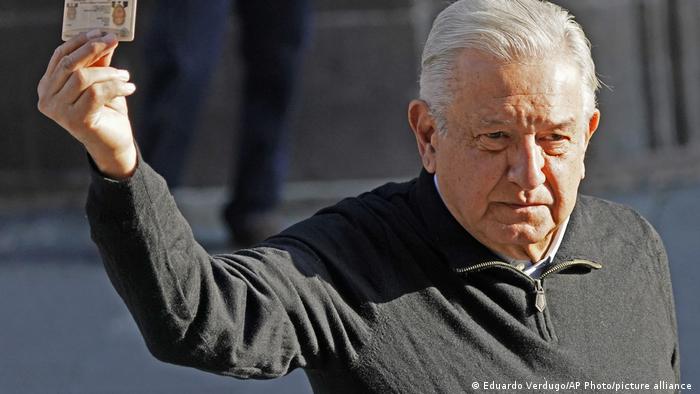 Voters in Mexico on Sunday cast their ballots in an unprecedented referendum on a possible recall of President Andres Manuel Lopez Obrador.

Initial projections from the electoral authority indicated that Lopez Obrador was heading for a clear victory in the referendum, with roughly 90% support.

However, less than two of every 10 eligible voters in the country bothered to vote on whether the popular president should end his term midway or continue to the end, preliminary estimates from the National Electoral Institute showed.

Forecasts showed the turnout for the plebiscite to be between 17% and 18.2%, far less than the 40% threshold needed to make the result binding. So even if Lopez Obrador had lost, he would not have been obliged to step down.

Lopez Obrador himself was the architect of the first so-called 'recall referendum' in modern Mexico, having created the scope for such a public vote with a constitutional amendment in 2019.

The voting exercise involved choosing between two options:  "He should be deprived of his mandate due to a lack of confidence" or "He should remain in the office of President of the Republic".

Supporters and critics had viewed his win as a foregone conclusion.

Opposition politicians urged their supporters not to participate, accusing the president of a costly waste of time designed to massage his image.

"There always has to be democracy in the family, in school, in work, in the unions, of course in public life and you have to participate,'' the president said.

The leftist President has fallen short of electoral promises to tackle violent crime and buoy Mexico's economy since assuming office in 2018.

However, a successful introduction of welfare programs and a political narrative where he is depicted as a morally upright defender of the poor against a corrupt, wealthy elite has helped bolster his popularity.