They were the hope of a community: 22 young people from Poland were set to begin a training program to combat a lack of domestic trainees. Most quit or were asked to leave, and not just on account of language. 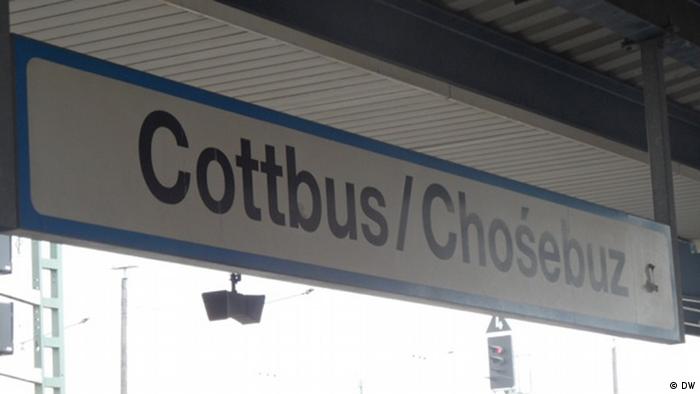 "In Germany, I have a lot of advantages," says Rafal Dawidowicz as he reaches for a screwdriver before disappearing underneath a hoisted Volkswagen bus. The 21-year-old from Poland is loosening the fan belt - an easy task for the young man who completed his training as a mechanic in Poland.

But he came to the German city of Cottbus a year ago to complete a training program as an auto technician along with 21 other young people from his home country. That's possible thanks to the freedom of movement for workers accord that went into effect in the EU on May 1, 2011. Young Eastern Europeans can take advantage of the agreement to complete their training in Germany, for example.

But those who want to take advantage of it must be able to speak German, since the instruction in vocational schools is in Germany's official language. Cottbus' Chamber of Crafts offered the young workers a language course. For four months, they learned how to conjugate verbs, decline nouns and deal with German articles.

The course went for eight hours a day, five days a week, broken up only by a few field trips that gave participants insight into German culture. 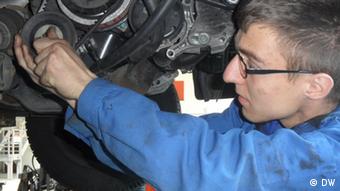 Rafał Dawidowicz is well on his way in Germany

"That wasn't always easy for them," said Martina Schaar of the Chamber of Crafts in Cottbus, who admitted they had the wrong expectations.

"We thought the young people would learn faster;" she said.

Ultimately just 11 young people from Poland took part in the language course. Some left the seminar early due to personal reasons, organizers said, and others had to leave because they were absent too often or were not keeping up with the assignments. And some were too busy partying to take the course seriously.

"For a few, it was their first time in a foreign country," said Martina Schaar. "They saw the project as a vacation."

A year later, just six young people are left from the original group.

Pawel Holak drilled and crammed verbs along with Rafal. For eight months, he has been in an apprenticeship as a skilled worker in the building industry. Together with his German colleagues, he is helping to build an attic floor. He completes smaller tasks, takes out the trash. 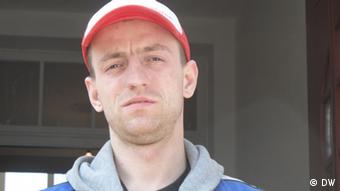 "I can earn more here than in Poland and there's more work here, too," said the 25-year-old.

"This training program is the chance of a lifetime," said Pawel during a lunch break with his colleagues.

"Pawel was well-received and has integrated into the team," said his boss, Rüdiger Galle.

Two weeks ago, he even travelled back to his home town in Poland with several new friends. They tried out Polish dishes that his mother cooked. Cultural exchange is important to Pawel, and he feels increasingly at home in Germany. 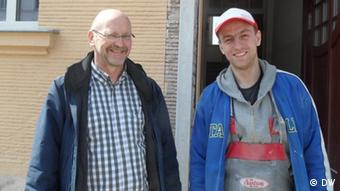 "Integration is very important," said Sebastian Szajek from Poland, who has helped mentor the young participants since May 2011. But many find that the cultural differences are too big.

"A lot of young people end up not making it because they can't really get a social foothold. For Polish people, coming 15 minutes late is still punctual," Szajek noted - in contrast to Germans' well-known preference for coming right on time.

"Pawel and I had to get used to each other at first," building contractor Rüdiger Galle said, noting that the process was not always easy.

"Sometimes Pawel forgot his tools, after holidays, he would suddenly be ill, and sometimes he came too late," Galle explained.

Galle has also grown less demanding as he and other craftspeople in Cottbus face a new problem: the region's training situation has completely changed. There used to be no available apprenticeships and too many applicants. Now the reverse is true, and 700 training spots in the area remain open. There are too few applicants partly due to the lower birth rate following German reunification. But those in charge of training programs also complain of future trainees' poor education in school.

School inspector Bruno Reinert bears some of the responsibility for the education situation in Cottbus, and he comes to his pupils' defense, saying: "Even Socrates complained about the downfall of the youth." 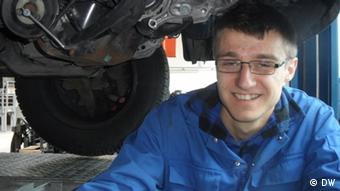 Reinert would like to see companies invest more in young workers, but he also points out that the numbers show immigrants from nearby Poland alone will not be able to solve the problem of too many apprenticeship vacancies.

Striving to be bilingual

The crafts chamber will stick with its initiative for now, though, and is looking for ways to reduce the number of dropouts.

"We want to house the trainees with guest families," said Szajek. That might make integration easier right from the start. The language course will take place in Poland in the future, and the parents will have to cover part of the cost.

The young workers will still have much to learn once they get to Germany, though, just as Rafal did. He is now taking additional German lessons because he knows that being bilingual could play to his advantage.

"We live in a border region, so I have to be able to speak both German and Polish," he said.

On the occasion of Germany's Labor Day, May 1st, the Confederation of German Trade Unions (DGB) is calling for a halt to temp jobs and 'dumping wages.' Has contract labor failed as an employment mechanism? (30.04.2012)

Good training is a key to entering the work force. So why do many European countries have such high youth unemployment rates despite graduating many well-trained people? And why is Germany different? (30.04.2012)

The German parliament has voted to make it easier for skilled workers from non-EU countries to work in Germany. The Blue Card, an EU-wide work permit, allows highly skilled applicants to seek work across the bloc. (27.04.2012)