The German parliament has voted to make it easier for skilled workers from non-EU countries to work in Germany. The Blue Card, an EU-wide work permit, allows highly skilled applicants to seek work across the bloc. 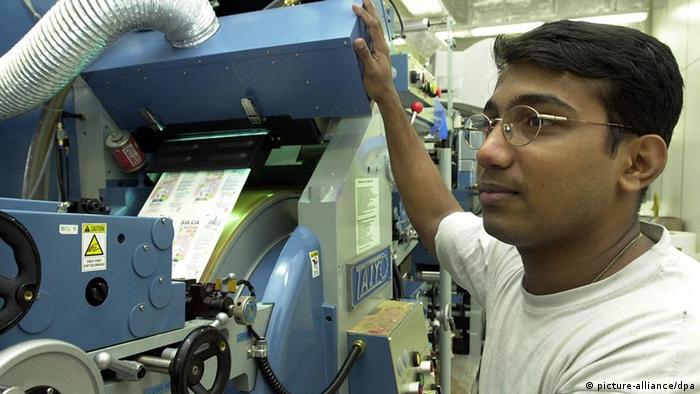 In the future, there will be fewer bureaucratic hurdles for skilled workers seeking employment in Germany.

The new legislation passed by the German parliament on Friday is in compliance with a guideline from the European Commission dating back to 2009, which stipulates that highly skilled workers from non-EU nations should have similar regulations regarding their residence status as foreign workers in the US.

The so-called "Blue Card" will be similar to the "Green Card" issued in the US that allows workers to stay in the country indefinitely.

Whoever wants to acquire a Blue Card will need to have a college degree and proof of having earned at least 45,000 euros per year - down from 66,000 - or only 35,000 euros for engineers and technicians in professions where there's already a particularly grave skills shortage.

Applicants who meet those requirements will get a temporary residence permit, which will be turned into a permanent one after three years in a given job in Germany.

Accompanying spouses will be entitled to seek a job of their own and wouldn't have to undergo any German language tests.

German university graduates from non-EU countries will now be allowed to stay in the country for 18 months after graduation, giving them the chance to find a job that fits their academic qualifications.

If they succeed they will be given the Blue Card after two years of employment.

The Social Democrat opposition members of parliament abstained from the vote. They object to the 35,000 euro threshold as being too low.

The Greens also abstained. They want to see a comprehensive overhaul of immigration legislation and argue that the current change to legislation does not go far enough.

The second chamber of parliament, the Bundesrat, still needs to approve the legislation before it can come into effect.