On the occasion of Germany's Labor Day, May 1st, the Confederation of German Trade Unions (DGB) is calling for a halt to temp jobs and 'dumping wages.' Has contract labor failed as an employment mechanism? 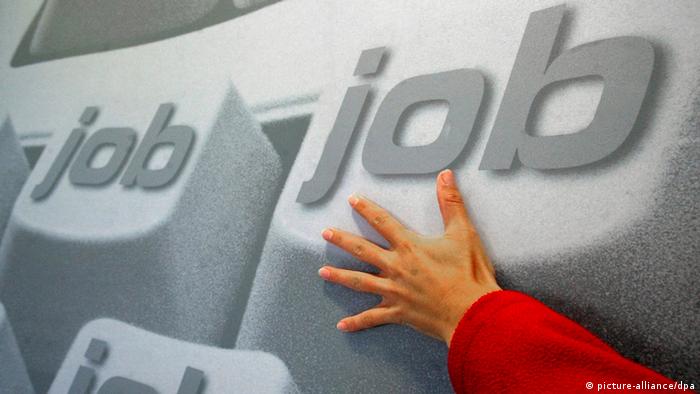 In recent years, contract labor has seen more growth than any other area of employment in Germany. Between 2003 and 2007, the number of temporary workers more than doubled here. Today, more than 900,000 people are employed by some 17,500 temp agencies, as businesses which contract workers to other companies on a short-term basis are known. Such employees compose just under three percent of the entire German work force.

Former Chancellor and Social Democrat Gerhard Schröder who paved the way for companies to hire workers via temporary employment. The idea was that temp workers could assist companies during peak periods of business, while the contract work could also help the unemployed get their foot in the workforce door - offering them a "bridge" to a permanent job.

Who gets a chance? 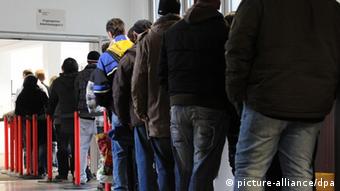 "Contract work is a very important tool for the labor market," said Marcel Speker, spokesperson for the Association of German Temporary Employment Agencies (iGZ). "Our surveys show that around one-third of temporary employees end up landing a normal job."

"Of course temporary employment helps the unemployed get their foor in the door, but it doesn't get them very far. Only very few make a substantial leap after that."

Researchers at the Nuremberg institute say seven percent of all temps find a permanent job after working on a limited basis.

So which figure is right - seven, or 30 percent?

"It's plausible that 30 percent of all contract laborers get a job outside of the sector following their temporary employment," said Lehmer. "But when you look at the real 'problem groups' - the long-term unemployed - which is what we do, then you find seven percent." 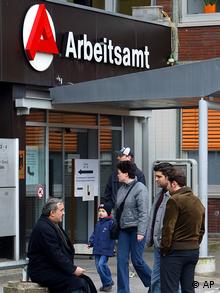 Even if one assumes that around one-third of temp workers end up getting a regular job in Germany, what happens to the other two-thirds?

"Unions have become very skeptical, which is reflected in their appeals on the occasion of Labor Day," said Alexander Herzog-Stein, of the Insitute of Economic and Social Research (WSI), which is an arm of the Confederation of German Trade Unions (DGB)-affiliated Hans Böckler Foundation. "We are unfortunately far away from the envisaged principle of equal treatment, laid down by law, that says the temporarily employed and regular personnel should enjoy the same labor conditions in a workplace."

German labor unions suspect that employees with normal contracts could be replaced with temporary workers - at far lower wages. Germany's so-called "revolving door" stipulation now prevents a repeat of cases such as that of drug store tycoon Alfons Schlecker. He founded his own temporary employment agency in 2009 and fired his staff, only later contract them as temp workers for a pittance. But a study by the union IG Metall cites companies such Porsche and BMW as possessing departments with unsually high numbers of contract laborers. 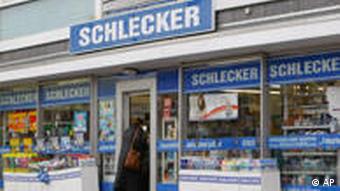 But iGZ spokesman Speker plays down that possibility. "That cannot be confirmed by statistics," he said. "You can always find such individual cases if you search for them long enough."

Lehmer, of the Institute for Employment Research, agreed. "We have no evidence that the replacement of core workforces has become a mass phenomenon," he said.

Still, the complaint remains that temp employees are treated as second-class citizens, yet conveniently fill workforce holes to help make German companies more flexible and competitive. They do so at low cost to the company, since a temp worker earns significantly less than those with regular jobs at the workbench.

"If we're placing our bets on compensating for fluctuations in demand, then contract labor is justified," said WSI's Stein. "The companies are buying flexibility. The problem is that such flexibility does not have to come cheaply." 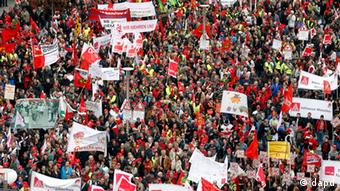 "Beating the drum is part of the business, especially at Labor Day," believes iGZ's Speker. "We have agreed to a minimum wage that will increase to 8.19 euros ($10.85) an hour on November 1 in western German states. So, as far as wages for temp workers go, we are at a higher rate than some 5.5 million people in other employment situations in Germany."

The unions, on the other hand, want to see a minimum wage of 8.50 euros and, in the long term, equal pay for equal work.

That could be worth striving for down the road, said Lehmer, but one must be careful that the bridge to a normal job does not become too narrow.

"If we were to usher in equal pay from the very first day onward, then one would have to presume that access for problem groups - for the long-term unemployed - would become more difficult," he concluded. "That's why we suggest a gradual model, so that pay adjustments are made step-by-step."

European youth are hit especially hard by the ongoing finance crisis. Finding a decent job - or any job at all - is a growing challenge. (27.04.2012)

Germany looks certain to dodge recession in the current year as Europe's most powerful economy shifts into higher gear. The government in Berlin says it'll keep focusing on budget consolidation. (25.04.2012)

A fifth of all Germans say they have been discriminated against based on age at some point in their lives. Age discrimination is not just a problem for older people - young people encounter it too. (24.04.2012)