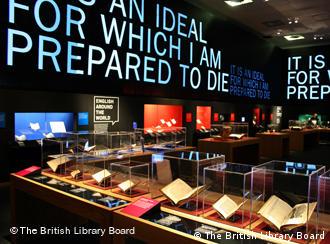 The widespread use of English means it has mutated a lot

DW: English is one of the most widely spoken languages in the world. What is your exhibition's approach to this lingua franca?

Jonathan Robinson:What we hope to show is how English has evolved over 1,500 years. Our collections here at the British Library include books, newspapers and lots and lots of sound recordings, so we have a good historical overview. Through our collection, we want to capture both how English has evolved linguistically from its origins as a Germanic dialect, but also socially. For instance, the way it was used in the British Isles and the way it spread across the world through trade and colonization, and has become - at the start of the 21st century - a global language.

Do you think it has evolved more than other languages? 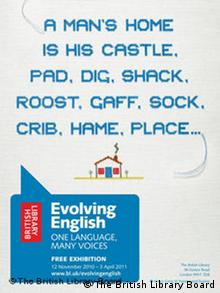 English can be colorful

English has arguably come into face-to-face contact with more languages than other (languages) have. So wherever English speakers have settled, it has absorbed their vocabulary and adapted to that environment.

We have a section called "English Around the World" where we look at the way English arrived in the Americas and elsewhere as a result of colonization and trade. New words were required to describe those new locations. For example, words like chintz and taffeta and seersucker and gingham only originated in the 17th century in the context of India's colonization. We are familiar with these nowadays, but back then they were very new to the audiences.

Would you say that the widespread use of English to communicate on the Internet, in international organizations or in business, has led to whole new type of English - a non-native as opposed to British or American English?

I think so, but it is very difficult to predict how things will develop. Obviously, this is a fairly recent phenomenon. English has only been a global language for the last 100 years – a relatively short time. However, there are today 1.4 billion non-native speakers of English compared to 400 million native speakers. What's interesting is that non-native speakers, like the Germans, accept changes that native speakers wouldn't accept. Such as plurals that don't really exist, like 'informations.'

Do you think those mistakes will at some point be accepted by native speakers? 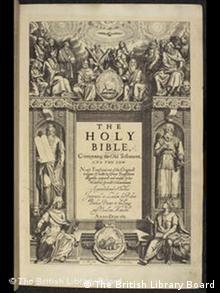 The King James Bible was set in English in 1611

Certainly they aren't yet. But if we look back in history, there is evidence that "mistakes" have become accepted. For example, the fact that we don't distinguish between first, second and third person as much as other European languages do is a result of contact between speakers of various dialects in England. So lots of those kinds of grammatical constructions were shed and simplified.

Seeing that is has gone through so many transformations, does English lend itself more to change and evolution than other languages?

The fact that it is spoken by so many speakers and in so many geographic and social contexts obviously means that there are a large number of people contributing to change. And we never had an institution like the Académie Française for the English language - not in America, not in the UK, not anywhere in the world. There has never really been an official restraining body.

It seems you have applied this approach to your exhibition as well. On your website, there is a project called "Map your voice." How can people contribute to that? 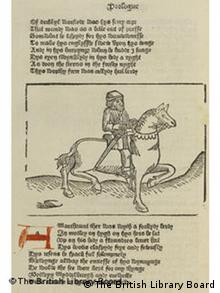 What will the future hold for a language as global as English?

That is very difficult to predict. I think particularly the way English is used on the Internet by speakers of all languages will have an impact on the way it is used in the future. But with new economic powers like India, China and Russia emerging, who is to say that in 1,500 years time, English will still be as relevant globally as it is today? Maybe it will have a place alongside other languages, which again will have an impact on the way English develops.

Italo-British author Simonetta Hornby spoke with DW about writing her latest book in her adopted tongue of English - and translating the Italian version herself. (27.01.2011)