Logistics are key if aid initiatives are to help Haiti | World| Breaking news and perspectives from around the globe | DW | 19.01.2010

Logistics are key if aid initiatives are to help Haiti

Governments, NGOs and individuals all want to help the victims of the earthquake in Haiti. The trick is to convert money and other resources into assistance where and when it's needed. In Haiti, that's not an easy task. 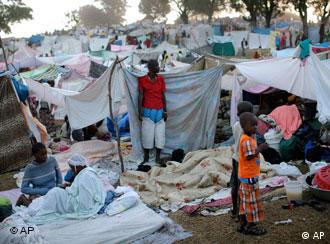 Hundreds of thousands of Haitians have become refugees

The catastrophic earthquake in Haiti on January 12 not only caused untold suffering for the inhabitants of that underdeveloped nation. It also cast the spotlight on the ways in which various entities, from individuals all the way up to the United Nations, respond to emergencies of this magnitude.

With the situation in Haiti growing ever more dire, the United States assumed the lead in relief and rescue operations - and drew some criticism for doing so. But that situation has parallels in Europe, where the need to act now takes short-tem precedence over the need to act together.

"Aid is first granted at the national level because it's quicker," a spokesperson for the German Foreign Ministry told Deutsche Welle. "At the same time, the member states assemble within the European Union to take larger action."

Germany, for instance, pledged 7.5 million euros ($10.8 million) in aid in the immediate aftermath of the crisis - a sum that may appear relatively small. But the Foreign Ministry says Berlin followed up with an additional 40 million euros from Germany as part of the 400 million euros aid package allocated for Haiti by the EU. 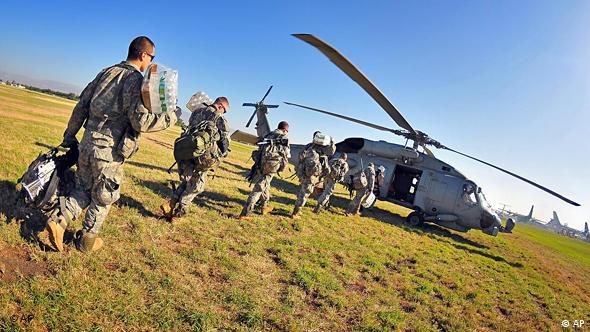 The US used military helicopters to bring in supplies

Some nations like the US or Spain use their national militaries to offer immediate assistance. In Germany, the first relief efforts often focus on state-owned groups like federal aid organization GTZ.

"We had people working in Haiti since 2008 to aid reconstruction efforts to fix damage from hurricanes," GTZ spokesperson Hans Stehling told Deutsche Welle. "When the government gave us the mandate to provide food to earthquake victims, we used them to assess the situation on the ground."

Within a week, the GTZ had transported 500 tons of food, chiefly flour, rice and beans, from the neighboring Dominican Republic to the Haitian capital Port-au-Prince, which was largely destroyed by the quake.

But deciding what gets where and when is a crucial part of both government and private efforts to help those in need.

The institution charged with managing the flow of the countless relief efforts is the United Nations Office for the Coordination of Humanitarian Affairs or UNOCHA. Stehling said most, if not all, governmental and non-governmental organizations used it.

And the report issues by UNOCHA on January 18 about the operational challenges facing relief workings in Haiti made for grim reading. 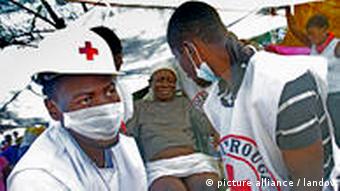 The Red Cross is one of many NGOs trying to help

The Port-au-Prince seaport was non-operational, while the city's airport was congested. Widespread damage to roads and the numbers of people trying to leave Haiti meant delays in the transport of vital resources and personnel.

UNOCHA reported that it took 18 hours, for instance, to cover the 376 kilometers (233 miles) between the Haitian capital and Santa Domingo in the Dominican Republic, where supplies and emergency specialists were also being flown in.

According to the UNOCHA reports, relief efforts were also being hampered by the shortages of warehouses, fuel and transport vehicles as well as security concerns.

Rebuilding will be tough

There is a difference between emergency relief and permanently oriented reconstruction and developmental efforts, even though the dividing lines are often fuzzy.

The German Ministry for Economic Cooperation and Development or BMZ is generally responsible for longer-term recovery measures as well as emergency food supply. One challenge is gathering sufficient information.

"The emergency provision of food is ongoing, but for lasting developmental measures we lack an assessment so far of when early recovery and rehabilitation procedures can begin," Kerstin Faehrmann - the BMZ head of Division for Developmental Relief and Transitional Aid - told Deutsche Welle.

"But we're trying to gather information so as to begin work in these areas as quickly as possible," Faehrmann added.

The UN's most conservative estimates put the number of Haitians made homeless by the quake in the hundreds of thousands. That's only one of the challenges to be faced when reconstruction, and not just immediate relief, efforts commence.

Non-governmental organizations will play a vital role in that process, but the lack of infrastructure is a huge impediment.

For example, the German-based group Adveniat, which distributed funds to Catholic charities, quickly set aside 1.5 million euros for Haiti. But a week on from the earthquake, the organization was still waiting for the chance to contact its Haitian partners to decide how the money could best be used. 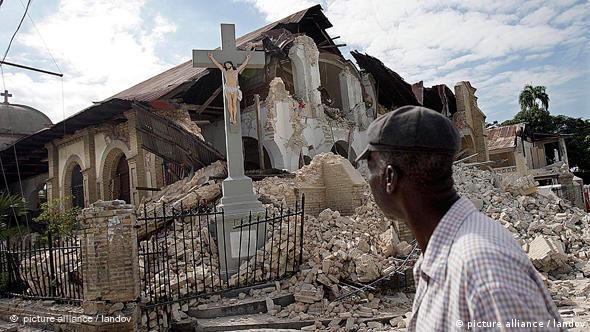 Much of money raised by NGOs will - and probably should - be spent down the road.

"The aid organizations have to save the money they receive now that's ear-marked for long-term development," Guenther Maihold from the German Institute for International and Security Affairs told Deutsche Welle. "It has to be used for ongoing and lasting assistance. That would be a long-term help for Haiti."

Money not the issue

Individual donations to help the victims of the earthquake were initially slow but began pouring in, once televised images made people aware of the extent of Haitians' suffering.

In Germany, as in many parts of the world, telethons and other public events have been organized to encourage people to give money to those in need.

"I ask our citizens from the bottom of my heart to open their hearts and their wallets," German Foreign Minister Guido Westerwelle told the ARD public television station. "I think we Germans are always ready to help, and we can show that now."

In fact, Germans are responding to Haitian needs. An appeal for donations on one television show on Sunday, January 17, alone raised well over one million euros.

But in order for Germans' and others' readiness to help to be translated into actual long-term assistance, specialists are going to have to solve a logistical as well as a humanitarian nightmare.

UN Secretary General Ban Ki-moon has called for 3,500 more peacekeepers to go to Haiti in a bid to control the worsening situation. This follows an EU pledge of over 400 million euros in humanitarian relief aid. (18.01.2010)

Eyewitness describes how the aid effort is progressing (19.01.2010)