Germans give almost 18 million euros for Haiti in TV telethon | Germany | News and in-depth reporting from Berlin and beyond | DW | 20.01.2010 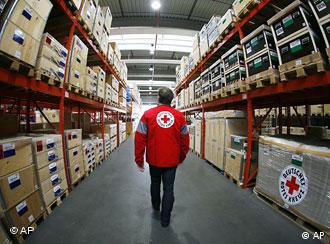 The special TV event for Haiti, organized by the German public broadcaster ZDF and newspaper Bild, proved a success, raising nearly 18 million euros for the devastated country by the end of the broadcast.

Chancellor Angela Merkel appeared at the beginning of the show to announce that the government would increase its immediate contribution to the United Nations World Food Program in Haiti from 7.5 million euros to 10 million euros. Merkel also promised that Germany would honor its long-term responsibilities and help to rebuild Haiti. 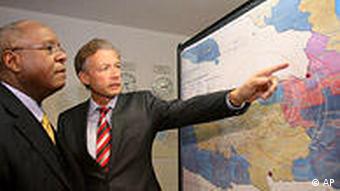 The Haitian ambassador, left, appeared on the show

The Haitian ambassador in Berlin Jean-Robert Saget also spoke during the show, expressing gratitude for the donations. He told viewers that last week's earthquake had hit the country just as it was achieving stability. "This has thrown us back by years," Saget said.

A benefit soccer match has also been organized between two of Germany's biggest clubs, Bayern Munich and VfL Wolfsburg. The clubs' sponsors have already guaranteed a donation of one million euros.

The money raised by last night's TV event will be given to various German relief organizations, including the German Red Cross, Caritas, Diakonie, World Hunger Aid, and Ein Herz fuer Kinder (A Heart for Children).

Merkel also announced that the process for writing charity donations off against tax would be as unbureaucratic as possible. "As for the tsunami, the donation tax statements will be as simple as possible," she said. "A proof of payment or a bank account statement will be enough to write the donation off, irrespective of how much it is."

Logistics are key if aid initiatives are to help Haiti

Governments, NGOs and individuals all want to help the victims of the earthquake in Haiti. The trick is to convert money and other resources into assistance where and when it's needed. In Haiti, that's not an easy task. (19.01.2010)

UN Secretary General Ban Ki-moon has called for 3,500 more peacekeepers to go to Haiti in a bid to control the worsening situation. This follows an EU pledge of over 400 million euros in humanitarian relief aid. (18.01.2010)