The last of the three Baltic states has joined the eurozone, hoping to boost investment and counter Russian influence. But only half of Lithuanians are in favor of the euro. 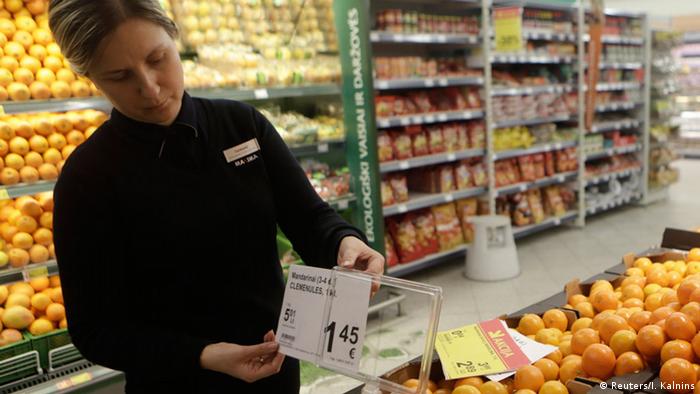 "I think the new currency will make us stronger - economically as well as politically," Prime Minister Algirdas Butkevicius told the Elta news agency despite the ongoing crises affecting the euro area.

Butkevicius marked the currency changeover at just after midnight local time (22:00 UTC) by withdrawing the first euro banknotes from a cash machine in the capital Vilnius, together with Estonian Prime Minister Taavi Roivas and Latvian Foreign Minister Edgars Rinkevics.

Lithuania is the 19th member of the eurozone and the last of the three Baltic states to adopt the single currency. It joined the EU in 2004, hoping to adopt the euro two years later, but failed to bring high inflation down sufficiently. Estonia joined the euro area in 2010, followed byLatvia in 2014.

The government also hopes to anchor itself firmly in the West, as it feels threatened by Russia's actions in Ukraine. In December, Moscow held surprise military exercises in Kaliningrad, its enclave that borders Lithuania, with 9,000 troops and 55 ships. At present, Russia is Ukraine's biggest trading partner.

Lithuania's credit rating is now well into investment grade, and the government is hoping that adopting the euro will help attract more foreign investment. Rating agency Fitch expects the country's economy to grow by 3.5 percent in 2015, three times as fast as the eurozone as a whole. But it is the bloc's poorest member, with wages far below those of more developed economies, which has led to many people leaving the country in search of better paid jobs.

Polls show that half the population of three million are still not convinced dumping the litas is a good idea. Three-quarters of people expect price rises after adopting the euro and almost two-thirds fear Lithuania is losing part of its identity, a Eurobarometer poll found. The litas, which had been used before World War II, was re-introduced in 1992 after the collapse of the Soviet Union.

Lithuania has become the eurozone's 19th member, but only half of Lithuanians are in favor of the new currency. That will change, Finance Minister Rimantas Sadzius told DW. (31.12.2014)