Lithuania has become the eurozone's 19th member, but only half of Lithuanians are in favor of the new currency. That will change, Finance Minister Rimantas Sadzius told DW. 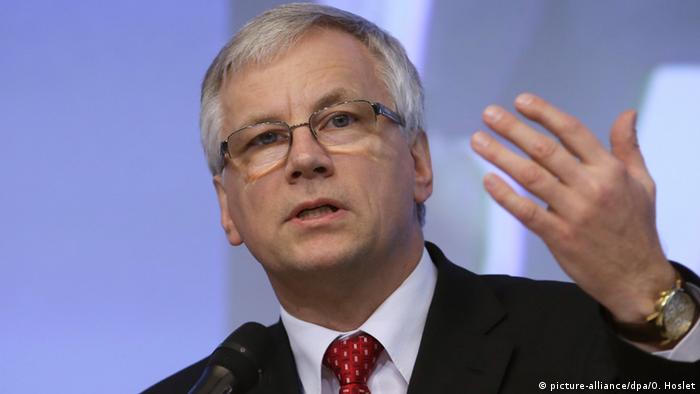 Why are you introducing the euro now, given that the whole world is talking about the debt and economic crises in the euro area?

People have been talking about the euro crisis for quite a long time and during all that time, the eurzone proved that it is resilient to external shocks, to internal tensions and strains. I think the eurozone has achieved a state where it can cope with the crisis by itself.

Regarding Lithuania, we've had a currency peg to the euro since 2002. We've undergone all the challenges that the eurozone has had - internal devaluation, salary cuts, social benefits cuts during the financial crisis in real terms. But we can't yet use the benefits of the eurozone.

We started using some, for example, lower interest rates for borrowing to finance our small budget deficit. But as of January 1, we will be at the table where decisions are taken about the eurozone, about monetary policy. For the investment climate it's also beneficial because we're removing any talk about any risks, any devaluation of our national currency, because we join the eurozone with the same rate that we fixed the litas to the euro at in 2002.

The exchange rate has been fixed for some time, as you say. What will change for Lithuanians apart from the notes and coins in their wallets?

They will not have to pay exchange fees and we'll have lower interest rates for borrowing, not just for the state, but also for private firms and individuals. For investors - and we need investors from abroad - they always calculated the return on investment by including risk premiums. Now the risk of the devaluation of the currency is removed, so the return on investment could be higher.

The magic number for Lithuania is 3.4528. That's the official exchange rate - 3.45 litas for one euro. How long do you think people will think in litas?

The experience of other countries that joined the eurozone showed that people convert into their old currency for a long time, at least five years …Only half the population thinks that the changeover to euros is good. But we have the example of Estonia. It took two years for this number - half of the population - to increase to 85 percent, who are supporting the euro at the moment.

So, I think in two years, public support for the euro in Lithuania will be equally high. 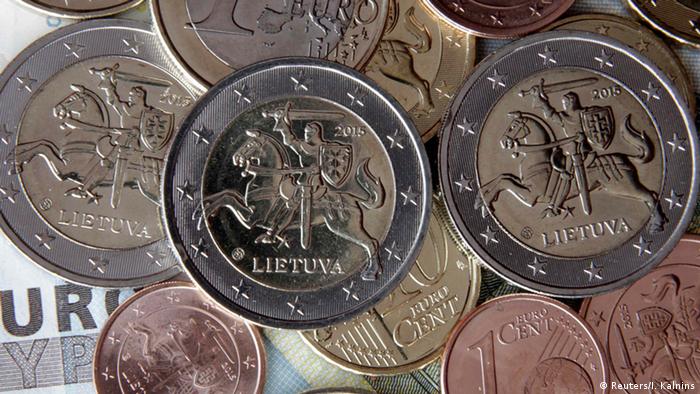 Lithuania's euro coins feature the country's coat of arms, a knight on horseback

How can you prevent some businesses from using the introduction of the new currency for price hikes? In Germany, many people thought for a long time that prices had gone up across the board.

We monitor prices very carefully. What we see is higher prices in services. But that can be explained through pay rises of 4 to 5 percent annually. It's clearly not because of the euro.

Other prices are stable or even decreasing because of many international economic factors like cheaper fuel and food. I think there'll be no such effect. We also have very strict controls and there is also competition.

We shall see, but monitoring of prices will take place throughout 2015.

The litas was a very strong symbol, of independence when the communist system broke down at the beginning of the 1990s. Do you think people will have a problem with giving up that symbol?

Yes, there such emotions, we're an emotional people. After the war, the litas served even longer than pre-war litas - because the litas was restored from pre-war times - but one side of the euro coin is decorated with our coat of arms, which has been used for Lithuanian coins since the 14th century. That will now be seen everywhere in Europe and it shows our identity in Europe.

How do the crisis in Ukraine and the European sanctions against Russia influence your currency and economic policies?

We had to downgrade our economic outlook quite considerably. For next year, we expect just 0.9-percent growth. We see difficulty for our firms that are exporting goods to Russia. We had quite a significant flow of re-exports, the transit of goods, through Lithuania to Russia, which decreased as well.

But on the other hand, we see that like after the first Russian crisis in 1998, firms are able to find new markets. They go West and euro adoption is a very favorable factor for them to look better for European markets.

Rimants Sadzius is a 54-year-old Social Democrat. He has been Lithuania's finance minister since 2012 as well as from 2007 to 2008. He studied chemistry and law.

The adoption of the euro in Lithuania had long looked unlikely because of high inflation, which Sadzius managed to bring down. Neighbors Estonia and Latvia introduced the euro in 2010 and 2014 respectively.

In the last 100 years, Lithuania has had several different currencies, including East Germany's Ostmark, the Soviet ruble, the Russian ruble, the litas and the talonas. In 1993, the litas was re-introduced. In 2002, it was pegged to the euro.