Lightning strikes kill over 100 in India during single day

As monsoon storms rip across India, officials said over 100 people lost their lives in a single day due to lightning strikes, with dozens injured by falling trees and electricity poles. More storms are on the way. 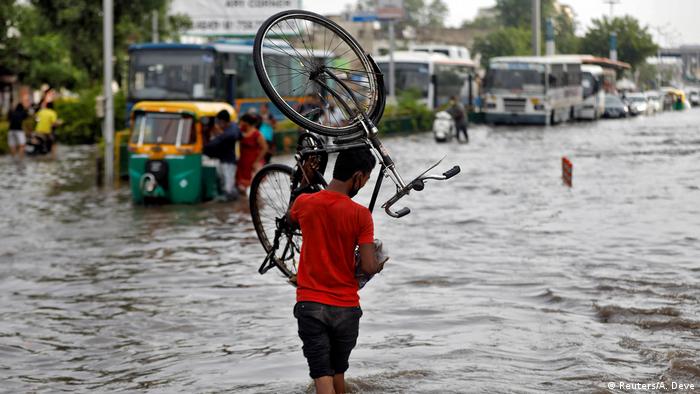 At least 104 people were killed by lightning strikes in the Indian states of Bihar and Uttar Pradesh on Thursday, officials said, warning that some reports on the causalities were still pending.

Prime Minister Narendra Modi expressed his condolences on Twiter and stressed the authorities were working "with urgency" to provide relief.

At least 21 deaths were reported in the neighboring Uttar Pradesh.

Meteorologists say more storms are on the way in the coming days, with officials urging people to remain vigilant and stay indoors.

Over 2,300 people were killed by lightning in India in 2018, according to the latest available numbers.

India faces monsoon storms every year between June and September. The rainy season plays a key role in replenishing the region's fresh water supply, but also claims lives and causes destruction across the country.

Could it be that the Indian monsoon suddenly ends?

Torrential monsoon rains have killed at least 42 more people in India in the past 24 hours. More than 350 people have so far died in rain-related incidents in India, Nepal and Bangladesh during the monsoon season. (29.09.2019)

Parts of southern and western India have been hit hard by heavy torrential rain. The resulting floods and landslides have claimed many lives and forced hundreds of thousands of people to take shelter in relief camps. (12.08.2019)

In just one week, lightning strikes have killed nearly 50 people in the Indian state of Uttar Pradesh. Most of the victims have been farmers caught without shelter in the drenching monsoon rains. Experts say it's due to climate change.

Monsoon rains have hit both Bangladesh and India, triggering flash floods and impacting millions of people. Dozens have died, and Dhaka calls it the country's worst flooding in almost 20 years.

Monsoon rains have not resolved the water crisis in rural areas like Nashik. An acute shortage of clean water forces young girls to walk up to 12 miles (20 kilometers) in heavy rain, often at the expense of their education.