Militias in Libya's west say they are determined to stop a bid by military strongman Khalifa Haftar to seize the capital. The escalation of tensions has raised prospects of renewed civil war in the country. 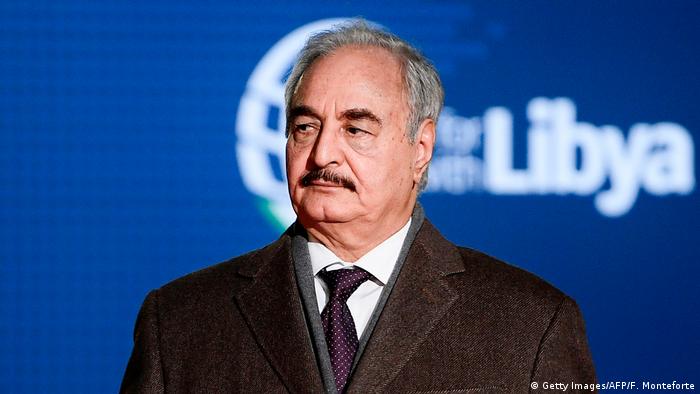 Militias from the western Libyan cities of Zawiya and Misrata said on Friday that they would resist an advance on the capital by rival army commander Khalifa Haftar, with reports that his forces had been pushed back from a key checkpoint near the city.

The push toward Tripoli by Haftar, who leads the self-styled Libyan National Army, comes amid growing fears of a renewed civil conflict in Libya. The country has been bitterly divided since rebels and a Western military intervention ousted and killed longtime dictator Moammar Gadhafi in 2011.

Kremlin spokesman Dmitry Peskov said on Friday that Moscow supported a negotiated political resolution to the situation in Libya.

"Of course, we consider that the most important thing is that operations there do not lead to bloodshed. The situation should be resolved peacefully," he said, while also saying that the Russian government was not backing pro-Haftar forces during their advance.

Ahead of a planned meeting with Haftar, UN Secretary-General Guterres also said on Twitter that there was "no military solution for the Libyan crisis, only a political one."

A torn country: Libya has been without a stable government since the NATO-backed uprising toppled Gadhafi in 2011. Since then, dozens of militias have fought for control of the oil-rich country. Although a Tripoli-based interim government, the Government of National Accord, was set up with UN backing in 2015, it has been unable to enforce its authority in the entire country. Haftar's so-called Libyan National Army backs a parallel administration in the east that has emerged as a major rival to that in Tripoli.

What happens next: The UN reconciliation conference is to convene in the Libyan desert town of Ghadames from April 14-16 and is aimed at outlining a plan for achieving peace in the country, including setting a date for holding long-delayed elections.

Tribal groups have agreed to end a blockade of Libya's oil production facilities after Tripoli installed a new leader at the National Oil Company (NOC). The move comes amid high global demand for oil.