Three years after the fall of dictator Moammar Gadhafi, Libya is being torn apart by power struggles. The security situation is catastrophic and the country is sliding into civil war. 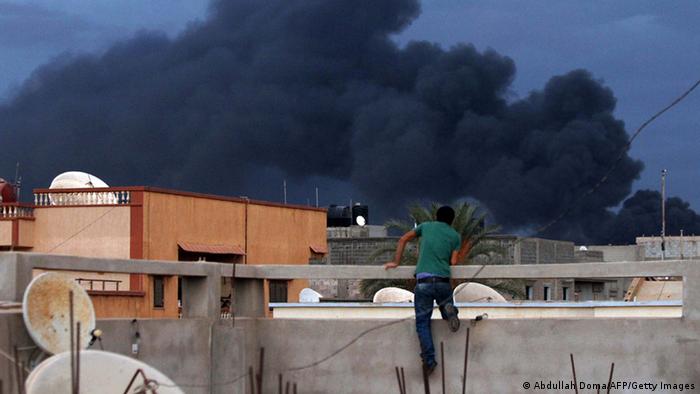 Bombings in Tripoli, explosions in Tobruk, deadly fighting between rival militias in Benghazi - barely a day goes by in Libya without terrible news. On Thursday (13.11.2014), two car bombs exploded in the capital. On Wednesday, at least five soldiers died in several attacks in the east of the country. The latest incidents show that those in power are less and less able to get the security situation under control.

No wonder: there are currently two rival parliaments and two rival governments in the country. One is dominated by Islamists, the other by their opponents. Both are fighting for influence, money, and resources and need the support of several different militias. The armed groups had fought side by side against dictator Moammar Gadhafi, but since his fall they only serve their own interests - with terrible consequences. 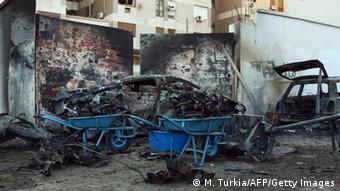 The Libyan capital has been wracked by car bombings

"There is a kind of civil war raging in Libya - marked by attacks, bombings, and kidnappings - which makes normal life there impossible," said Günter Meyer, director of the Arab world research center at Mainz University, Germany.

The desperate security situation is also down to the fact that the political institutions in Libya have been severely weakened, or else are non-existent. Gadhafi made sure of that. The self-proclaimed revolutionary leader did all he could to nip any political opposition in the bud. He neglected the army and the regular security forces to strengthen his loyal palace guard. After his violent death, the plan was to integrate the militias into new security services. But that didn't happen. Instead, the militias take the state's money and fight for the interests of their own clans or cities.

Some observers are already expecting the country to collapse completely, even though it hasn't been unified for very long in the first place. It was only in 1963 that the autonomous regions of Tripolitania, Cyrenaica, and Fezzan were put together into a central state. That unity is now under serious threat, because the Islamists did not accept their election defeat, and, with the help of militias, launched an attack from Misrata and took over the capital Tripoli. On top of that, they were able to get the supreme court to declare the parliament elected in June illegal and set up their own parliament in its place. 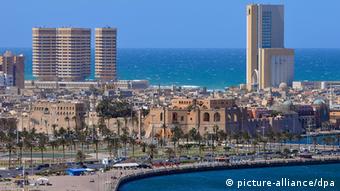 Libya is on the verge of collapse, say experts

"The whole thing is a proxy war within the Arab world," says Meyer. "The Islamist camp is supported by Qatar and Turkey, while the officially recognized government gets its support from Egypt and the United Arab Emirates." For that reason, the originally elected parliament no longer convenes in Tripoli, but in Tobruk, near the Egyptian border. But there are tensions between Islamists and their opponents around Benghazi in the east of the country too, where General Khalifa Haftar, who broke with Gadhafi at the end of the 1980s, is fighting the Islamist militias.

Libya has long been considered a safe haven for the world's jihadists. In the eastern city of Derna, an Islamist stronghold even in Gadhafi's time, the Islamic Youth Shura Council, an extremist group, has sworn allegiance to the "Islamic State" militia in Syria and Iraq. In Derna, too, the state institutions have barely any influence.

In light of these circumstances, it is "completely undisputed," says Meyer, that the state of Libya has failed. There are no authorities that control the country, and the situation has got spectacularly worse in the past three years. "Many Libyans," says Meyer, "yearn for the stability that Gadhafi provided - even though he was an authoritarian ruler."

Thursday's court ruling to nullify parliament deepens political chaos in the North African nation. The decision, which cannot be appealed, comes amid intense fighting between Islamist and loyalist forces. (06.11.2014)

Heavy fighting has been reported in Benghazi as the Libyan army pushes Islamist fighters back. A large ship has been set ablaze in the city's port. (03.11.2014)

Warring armed groups in Libya are committing "widespread abuse," according to Amnesty International. The organization has warned that militia leaders could face trial by the International Criminal Court. (30.10.2014)