Officials have begun recounting votes and tallying absentee ballots in elections in Libya. Meanwhile, a rights group says militias still hold 5,000 detainees, despite a deadline to transfer prisoners for trial. 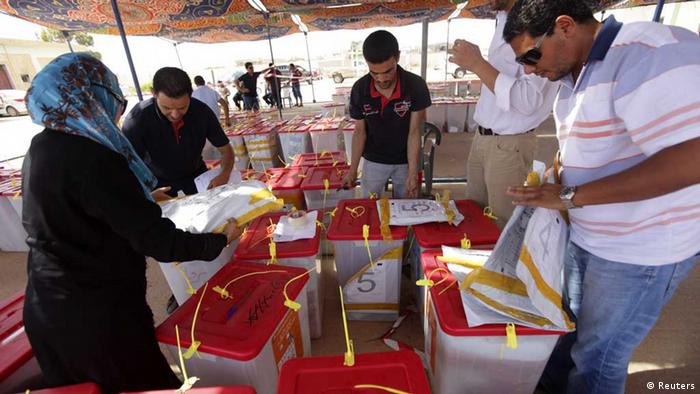 The moderate National Forces Alliance of former interim Prime Minister Mahmoud Jibril had scored a landslide victory over rival Islamist parties, partial tallies showed on Thursday. The defeat for the political wing of Libya's Muslim Brotherhood bucked a winning streak for Islamist groups in other Arab countries transitioning to democracy, such as Egypt and Tunisia.

US Deputy Secretary of State William Burns, in Tripoli for talks, called the elections a milestone on the path to democratic institutions. Talks between Burns and Libyan officials also touched on security, health and education as areas for cooperation. Though no contracts were signed during the visit, Burns said the United States looked forward to forming relationships across the board, including between the countries' two armies, once a new government is formed in Libya.

Meanwhile, Human Rights Watch charged that Libya has done little to ensure prisoners' due process rights. "Across Libya, thousands of detainees still languish in prisons run by militias, without a formal charge and without any prospect for legal review," the organization's Middle East and North Africa director said. "Despite months of cajoling the militias, the transitional authorities missed the deadline and failed to gain control over approximately 5,000 people still held arbitrarily by armed groups, some subjected to severe torture."