The aim behind Daniel Libeskind's architectural restyling of Dresden's Military Museum was clear: not another glorified weapons display. But the museum will have to find a new message before it reopens.

Tanks, tin soldiers, uniforms, weapons of relations and the first German U-boot: The Bundeswehr museum on Dresden's Stauffenbergstrasse has everything one would expect from an exhibition on German military history. However, the museum is far from meeting today's didactic and architectural standards.

To close this gap, the Bundeswehr, Germany's army, is investing 35 million euros ($44.3 million) in renovating the landmarked building. American architect and museum specialist Daniel Libeskind is responsible for redoing the austere structure, which had been used as a military museum under the Nazis and later under the communist SED party.

Dresden is not Libeskind's first war museum. He also designed the Imperial War Museum in Manchester, which opened in 2002.

"Germans have to accept their past"

"When the contest for the museum renovation was announced, everyone expected that something would be built at the back side of the arsenal," Libeskind said. "But I thought, why should the military building be hidden? Germany is a modern democratic country. Germans have to accept their past and understand the military history museum as something positive. That's why I decided to insert a glass wedge through the front of the arsenal." 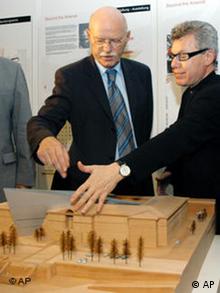 The notch in the facade of the Dresden museum -- like a bolt of lightening -- is an allusion to the unsoundness of this world, according to Libeskind. The asymmetrical "V" is an enormous victory sign that points toward downtown Dresden, which Allied bombers utterly destroyed at the end of World War II.

"The main goal is, of course, to prevent war and violence," he said. "But in this world you need a military to do that."

The prominently placed wedge also stands for flux, volte-face and total change, which Heuser was open to, fortunately for Libeskind's plans. The new museum is to represent not only the German army's classic task of national defense, but also the paradigm shift that has taken place: the Bundeswehr's peacekeeping missions.

"This is somewhat problematic for us at the moment," Heuser said. "We don't have many pieces to exhibit yet." 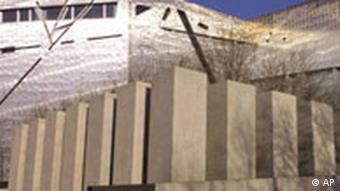 To critics, the military history museum has been highly polished and well organized, but without a statement. Dresden wants to step away from the homage-paying collection it used to be and replace it will a fresh exhibition concept.

The new approach means confronting the anthropological side of violence, said Gorch Pieken, project leader for the remade exhibit.

"We examine not only governmental but also social implementation of violence and have attempted to place a cornerstone in the cultural history of violence," he said. "We don't want an overbearing, aesthetic glorification of weapons or a multimedia remake of the trenches of Verdun. Neither should it be a hero memorial to celebrate military victories with utmost national pathos."

The search for deeper meaning

What, then, should the German Bundeswehr's military history museum represent: the wars of the 20th century and the millions of deaths that occurred? Or war as dismal tragedy?

The foundation has already been poured, but the public will have to wait for the answer until the museum's grand re-opening in 2009.

Germany's army turns 50 on Saturday. It was originally formed to facilitate war-torn Germany's integration into the West. Today, the Bundeswehr maintains the peace in hot spots around the world. (Nov. 12, 2005)