Liberia's frustration with President Weah spills onto the streets

Rising public discontent in Liberia over the economic crisis and alleged corruption under President George Weah spilled onto the streets on Friday, with an unprecedented mass protest dubbed #SavetheState. 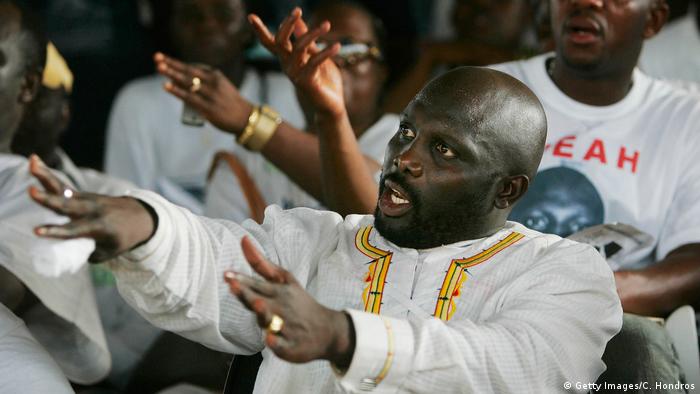 Liberians turned out in large numbers in the capital, Monrovia, to petition President George Weah who is under fire on all fronts: The economy is in crisis, with high inflation and public debt and the average Liberians are battling soaring food and fuel prices as a result.

Liberians are angry over alleged top-level corruption and violations of human rights, and many worry that Weah is enriching himself, trying to silence his critics, mingling with civil war-era figures and pulling the country back to its dictatorship past.

The protest was organized by the Council of Patriots (COP), a coalition of civil society groups and opposition parties. A petition drafted by the coalition partners was handed to Vice President Jewel Howard Taylor at the seat of government on Capitol Hill.

"The president is sending the vice president. The president says he's not secure coming here," said Darius Dillion, one of the protest organizers.

"We refuse to leave the street until he comes to take our petition," protester Ibrahim Fakih said. "We want our president to lower the suffering of our people. We wanted a new leadership that's why we voted George Manneh Weah, but today we are disenchanted."

On DW Africa's Facebook page, one follower wrote: "From what I understand, at least the man let the people protest in peace to voice their dissatisfaction, as opposed to what we are seeing in Sudan at the moment."

In the tense buildup to the protest, however, which saw widespread fears that those taking part would be met with a violent response by security forces, Weah had tried to stave off the public display of no confidence in his leadership since he took office in January 2018.

Read more: George Weah sworn in as president of Liberia

Weah met with the leaders of COP, churches and the traditional council, and representatives of the regional ECOWAS bloc and the African Union, in a bid to stave off the protest. Dialogue, the president said, worked better than protesting and cited the risk of the kind of unrest seen during the Liberian Civil War. 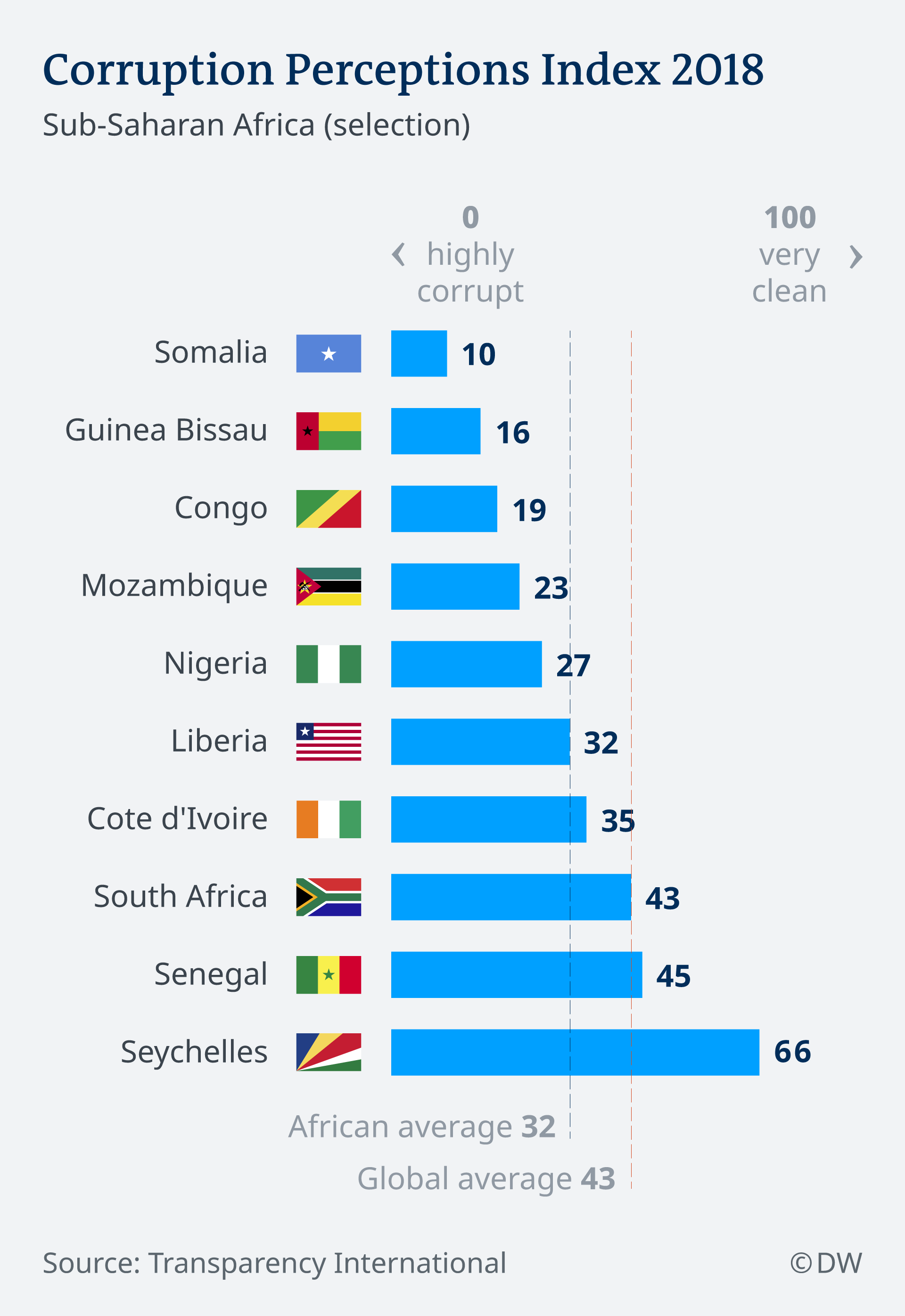 The public seemed set on the idea of civil mass though, and Liberia's leading non-partisan grassroots democracy, peace, and human rights watchdog, NAYMOTE, backed their plan for civic mass action and the Weah administration permitted organizers to protest.

"As it is now, Liberia is going through a challenging period. Economically the country is not doing too well - we also have issues about the exchange rate, we have issues around the allegation of corruption, like that of the missing L€16 billion. So, several issues led to this protest," S Aaron Weah-Weah, the organization's program director, told DW.

The Liberian dollar is at an unprecedented 200 to one US dollar and the public has pinned the blame on the Central Bank of Liberia (CBL). The institution has been shrouded in scandal since L$16 billion (€88 million, $100 million) in newly-printed bank notes were reported missing in late 2017 before Weah succeeded Ellen Johnson Sirleaf.

Public distrust remains high despite a recent US-backed investigation that found the money was sitting in a vault at the CBL and despite the arrest of several former CBL officials, including Sirleaf Johnson's son Charles Sirleaf - a former deputy governor at the institution.

Sirleaf was indicted in March on charges of economic sabotage, misuse of public money and criminal conspiracy 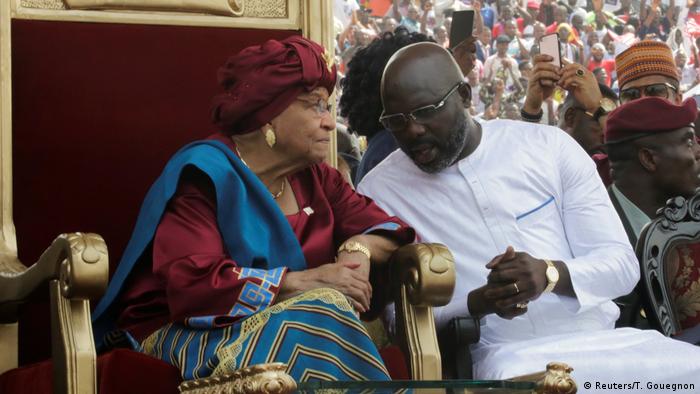 Sirleaf Johnson, who faces strong criticism over the implication of her son in the 'missing billions' scandal, said she wished there would no protest on June 7

The case of the missing millions fueled public perceptions of corruption in the high echelons of power and spawned the hashtag #BringBackOurMoney and a series of demonstrations, but on a much smaller scale than the June 7 protest.

The COP coalition is calling on Weah to answer over the construction of private luxury buildings, the acquisition of a private jet and yacht and his refusal to declare his assets within the required time-frame after taking the top job.

When DW met up with Weah in 2017, the then a senator of  Montserrado County running for the presidency, his home was a modest official residence. A more elaborate mansion was under construction on an adjacent property.

"Conduct a comprehensive audit of all and any of the dozens of personal infrastructure and/or building projects undertaken by President Weah at several locations in Montserrado County," the COP petition reads.

Students are growing increasingly impatient and angry over the long wait to see Weah deliver on a promise he made in October 2018 to ensure free education public universities. Carlos Tingbah, the leader of the Vanguard Student Unification Party (SUP) of the University of Liberia, also taking part in the protest, calls Weah an "emerging fascist and dictator" who goes after critical voices.

"You just heard in recent time that the president said he would deal with anyone who insults the president and he is the one who has insulted the presidency. He is incompetent for the position he occupies," Nowah Gibson, a protester who is visually impaired, told DW.

Independent media owner Henry Costa, commenting on the protest, said: "We are in North Korea. We have a dictator on our head."

Many Liberians feel provoked by Weah's ties to key figures and former rebel generals during the civil war that ravaged the between 1989-2003 and say they had voted for the former professional footballer expecting otherwise. 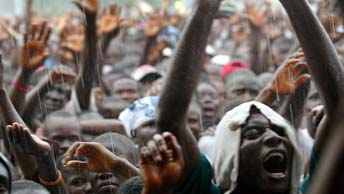 Talk has been going around on social media that the protest was engineered by the descendants of the freed Liberian slaves who returned from the United States to found what became Africa's first independent republic.

"Obviously there is still this divide between those we refer to as Americo-Liberians and indigenous people, so I wouldn't be very fast to rule that factor out," said S Aaron Weah-Weah of NAYMOTE. "However, there are numerous factors that could have contributed to where we are now as a country."

Evelyn Kpadeh (in Monrovia) and Isaac Mugabi (in Bonn) contributed to this report.

The president-elect is popular among the country's youth, who are confident that he will represent their interests better than his predecessor. Vice President Joseph Boakai has accepted defeat. (29.12.2017)