George Weah sworn in as president of Liberia

Football legend George Weah's inauguration ceremony has marked the country's first democratic transition of power since 1944. Liberians are placing their hopes on him, but he has a daunting task ahead. 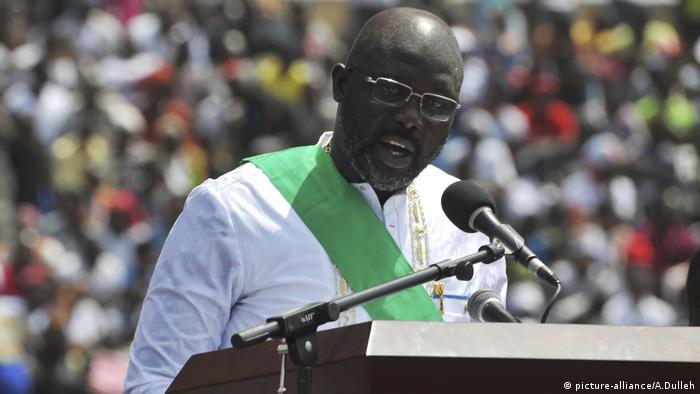 Thousands of Liberians queued for hours to get into Samuel Kanyon Doe stadium near the capital, Monrovia, where George Weah was sworn into office. Several African heads of state were in attendance.

Referring to his past as an international football star, the 51-year-old newly inaugurated president said: "I have spent many years of my life in stadiums, but today is a feeling like no other." He went on to reiterate that his first priorities as president would be to root out corruption and pay civil servants "a living wage," as well as encourage the private sector.

Experts are not optimistic

Liberians held prayer services in the 48 hours preceding the ceremony signaling an awareness of the challenges which await their new president. Weah is inheriting from his predecessor, Africa's first female President, Ellen Johnson Sirleaf, a weak economy and dilapidated health and education sectors.

George Weah, who won the second round of presidential elections at the end of last year, has no experience in politics. Still, many Liberians are placing their hopes on the new president. One user onDW Africa's Facebook page said that he hopes Weah will appoint his administration on the "base of merit" and abstains from nepotism, something his predecessor was often accused of.

Experts do not seem optimistic about Weah's capacity to tackle corruption and bring technocratic expertise into the cabinet. Malte Liewerscheidt, Senior Africa Analyst at global risk consultancy Verisk Maplecroft, said Weah is already feeling the heat: "He is under pressure from various constituencies and unlikely to nominate a cabinet of experts as he claimed he would do shortly after his electoral success."

The same Facebook user from Liberia who called on Weah to appoint people based on merit, said he is nevertheless optimistic: "I have confidence in Weah. If Weah doesn't make Liberia the first or second most developed country in Africa then forget leadership in Africa. Because he has all it takes to make Liberia great."

Expectations are thus high for the 25th president of Liberia. Voters will hold him to his promise of jobs and better schools. Especially the former, as another Facebook user pointed out. "An 85 percent unemployment rate is a shame!" another user wrote, adding that it doesn't make sense to go to college, if you can't get a job afterwards.

Liberia is one of the poorest country's in the world. Its economy is very dependent on rubber and iron ore. The slump in commodity prices in 2016 badly affected an economy already shaken by the Ebola crisis that started in 2013 and lasted three years. The economy has since recovered, but not enough to offset the effects of an inflation of 11 percent on the price of staple foods. 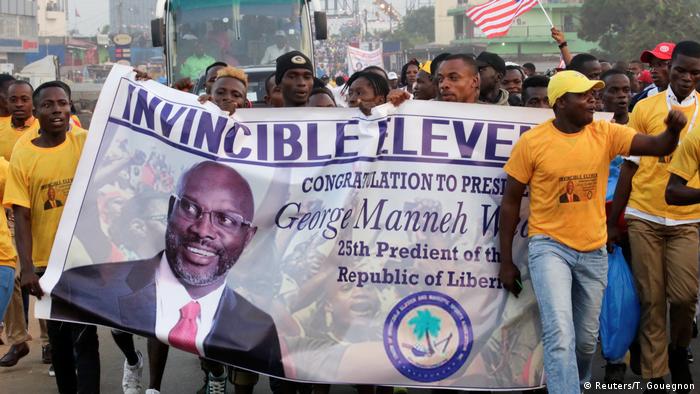 Betting on the new president

The battered economy has driven up unemployment especially among young people. About 60 percent of Liberians 4.6 million citizens are under 25. Many of them voted for Weah. His rags-to-riches story appeals to the young people's imaginations. But some social media users poked fun at Weah's political background which started after he retired from professional football: "I will soon abandon farming to learn how to play football. Then: to the presidency."

Social media users on DW Africa's Facebook page were, for the most part, happy with their new president, although some sounded an admonitory note: "Don't betray the trust of common citizens in Liberia. Don't get power drunk," one Liberian stated.

The president-elect is popular among the country's youth, who are confident that he will represent their interests better than his predecessor. Vice President Joseph Boakai has accepted defeat. (29.12.2017)