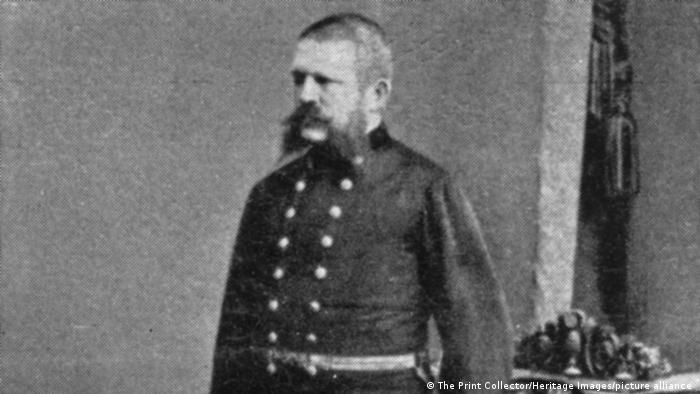 Little was known about Alois Hitler, the father of Adolf Hitler, until now

Previously unknown letters written by Adolf Hitler's father, Alois Hitler, shed light on the family origins of the Nazi dictator, reveals a new book that was published on Monday.

In his German-language book "Hitler's Father: How the Son Became a Dictator," Austrian historian Roman Sandgruber argues the elder Hitler played a large role in shaping the psychology of his son.

Alois Hitler, who died in 1902, was an Austrian customs officer whose job required moving house and family 18 times.

Although Alois Hitler had no practical farming experience, he "always wanted to be a learned gentleman farmer who was better than others," writes Sandgruber.

He describes Alois Hitler as a mix of being self-taught, smug and someone who grossly overestimated himself.

Like his father's handwriting, Adolf Hitler's script was also in the Kurrentschrift (running hand) style, with many sharp angles and changes of direction, noted Sandgruber after studying the ageing bundle of letters.

Anti-Semite Adolf Hitler — born in Austria's Braunau am Inn in 1889 to Alois and his third, much-younger wife, Klara Pötzl — likely later sought to conceal that the family once lived in a Jewish-owned property in Urfahr near the Danube river city of Linz, the book reveals.

The letters also show that Hitler's mother, nearing death in 1907, was treated by a Jewish doctor who later escaped to America.

Hitler was already an anti-Semite in his youth, concludes Sandgruber, disputing claims that Hitler's hatred of Jews was forged after he moved to Vienna.

As a young man, Hitler moved to the city around 1908, aiming to become an artist, despite being turned down for study.

The latest findings are contrary to portrayals by Hitler's teenage friend, August Kubizek, who is often cited by other historians, maintains Sandgruber.

As the leader of the Nazi party, Hitler emerged as German chancellor in 1933, unleashed World War II and instigated the mass murder of Jews and other persecuted groups.

Adolf Hitler's only significant revolt against his father, notes Sandgruber, was to reject Alois' wish that he also pursue a civil service career.

"He wanted to be a free artist and not to follow in his father's footsteps," writes Sandgruber.

However, both father and son also shared "contempt" for authority and were anticlerical, although Hitler did not quit the Roman Catholic church, the historian added.

Alexandra Föderl-Schmid, who reviewed the book for the Süddeutsche Zeitung newspaper, noted that Hitler, "who attached so much importance to an ancestral passport and Aryan origin, had himself more than one gap in the family tree."

Enough for a new film?

On Alois Hitler there had been "almost no sources," writes Föderl-Schmid in her review of the book.

There are a "large number of books and films about [Adolf] Hitler's chauffeur, personal physician, press chief, photographer, [and] secretary" but not his father.

The material in Sandgruber's book could be enough, she argues, for a potential new film on Hitler's family origins.

Even over 75 years after World War II, modern-day Germany still needs to rid itself of 29 legal or regulatory texts that allude to wording introduced when Hitler was in power, government-appointed anti-Semitism commissioner Felix Klein told news agency AFP last month.

Government critics, for example, are calling for the removal of the term "race" from Article 3 of Germany's constitution. Last year, Chancellor Angela Merkel declared herself open to such a deletion.