The letter included the fourth known example of Einstein writing the "E=mc²" equation by hand. It was originally expected to sell for around $400,000. 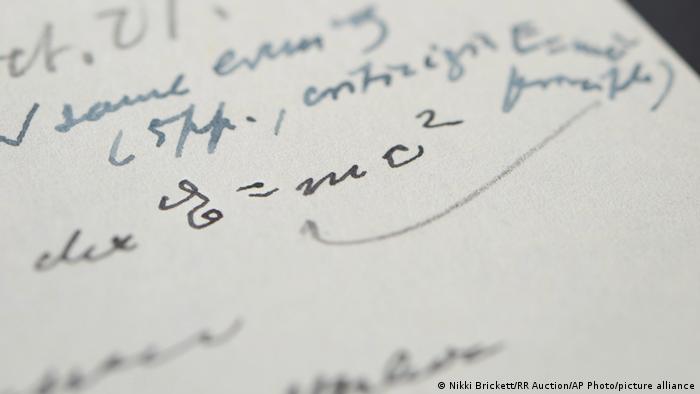 The letter was addressed to fellow physicist and Einstein critic Dr. Ludwik Silberstein

A letter written by Albert Einstein, in which he writes out his E=mc² equation, has been auctioned for more than $1.2 million (€985,000), or about three times more than its expected value, Boston-based RR Auction said on Friday.

Archivists at the Einstein Papers Project at the California Institute of Technology and the Hebrew University of Jerusalem say there are only three other known examples of Einstein writing the famous equation by hand.

The letter, the fourth known example, is the only one to be part of a private collection. It was originally expected to be auctioned for $400,000, but was sold for the final price of $1,243,707.

The letter was "important from both a holographic and a physics point of view, as it shows Einstein's thinking on one of the most basic of all physical problems," a statement issued by RR Auction said, adding that "the quest for a 'unified field theory' consumed the final third of Einstein's life."

The equation, which means energy equals mass times the speed of light squared, changed the understanding of physics by showing that time was not absolute and that mass and energy were equivalents.

The handwritten letter was addressed to fellow physicist  Dr. Ludwik Silberstein and dated October 26, 1946. Silberstein was a well-known colleague and critic of some of Einstein's theories. The letter was part of his personal archives, which were sold by his family members.

"Your question can be answered from the E = mc² formula, without any erudition," Einstein wrote. "I am convinced that this (or a formula corrected with respect to the radius of the masses) cannot help in shedding light on atomic constants. For that, one must first have a theory that contains the correct unification of gravitation and electricity."

Five parties took up the bid at first, but once the price reached $700,000, three of the bidders dropped out of the auction, which began on May 13 and finished on Thursday. The buyer of the letter was not publicly identified.