The famous physicist wrote the sentence on a bit of stationary after finding out he had won the 1921 Nobel Prize in physics. His words were as lucrative as they were profound. 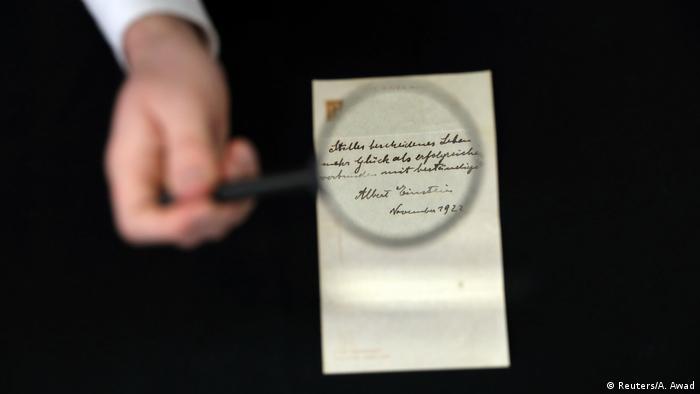 A note on happiness written by Albert Einstein in a Tokyo hotel in 1922 fetched a relatively high price of $1.3 million (€1.1 million) at a Jerusalem auction house on Tuesday.

Einstein wrote the message on Imperial Hotel Tokyo stationary shortly after finding out he had won the 1921 Nobel Prize in physics, Winner's Auctions and Exhibitions said.

Note to self: That's rich

After writing down his formula for lifelong happiness, Einstein received a delivery from a hotel attendant.

The physicist, finding himself without any cash, handed his note to the bellboy in place of a tip. Einstein then reportedly told the bellboy to keep the note, which he claimed would eventually be more valuable than a regular tip.

Almost a century later, the attendant's nephew put the theory to the test and put the note up for sale at a Jerusalem auction house.

After bidding started at $2,000, the price rapidly increased until an unidentified European buyer had won the bid, paying a final figure far higher than the pre-auction estimate of between $5,000 and $8,000.

The bellboy's will, Einstein's way

Einstein was born in the city of Ulm in the modern German state of Baden-Württemberg in 1879. He went on to transform modern physics with his general and special theories of relativity. By the time of his death in 1955, his name had become synonymous with genius.