Einstein letter fails to sell at auction in Jerusalem

A letter from 1950 reveals a discussion the renowned physicist Albert Einstein had with his assistant. Einstein's letter was supposed to go under the hammer on Tuesday but failed to sell. 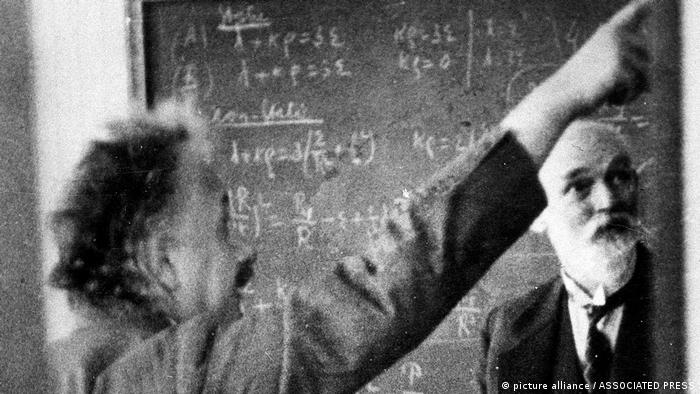 A handwritten letter by Jewish-German physicist Albert Einstein in which he discusses his "Theory of Everything" was supposed to go under the hammer in Jerusalem on Tuesday, but no buyer was found. The auction's starting price was $20,000 (€18,000). A spokeswoman for the Kedem Auction House said that the letter would go back to the owner, who would continue trying to sell it.

Einstein had sent this letter to his assistant, Ernst Gabor Straus, in June 1950. In it, he responds to Straus' critiques of his work, providing insight into how the two researchers collaborated together.

Natural science was always Albert Einstein's world. According to his own "Autobiographical Notes," which he wrote at the age of 67, he recalled already being intrigued by a magnetic compass as a 4-year-old: "I can still remember... that this experience made a deep and lasting impression on me. Something deeply hidden had to be behind things."

Why is Einstein's theory of relativity so famous?

Einstein was born the son of a Jewish family that had lived in Swabia for centuries on March 14, 1879 in Ulm. One year after Albert's birth, the family moved to Munich, where his father, Hermann, and his uncle, Jacob Einstein, founded the "Einstein und Cie" electrical engineering company.

Albert and his younger sister Maja grew up in a liberal home. At school, the boy was always one of the best in his class. At the age of 12 he taught himself Euclidean geometry, but he could not cope with the drill forced on young boys in the Empire. School, to him, was a barracks yard and the teachers were sergeants. They "strangled the joy, the sacred curiosity of research," he said. "Apart from stimulation, this delicate little plant mainly needs freedom."

At the age of 15, Albert left school and followed his parents who had moved their business to Milan. In Germany, he was supposed to have graduated from high school, but the teachers at home accused him of spreading his disrespect to his classmates. Defiantly, he threw everything away, later catching up on his A-levels in Switzerland, where he later attended the Polytechnic University in Zurich. There, too, he often skipped lessons and instead devoted himself to the masters of physics and violin playing — and his fellow student and later wife and mother of his three children, Mileva Maric. 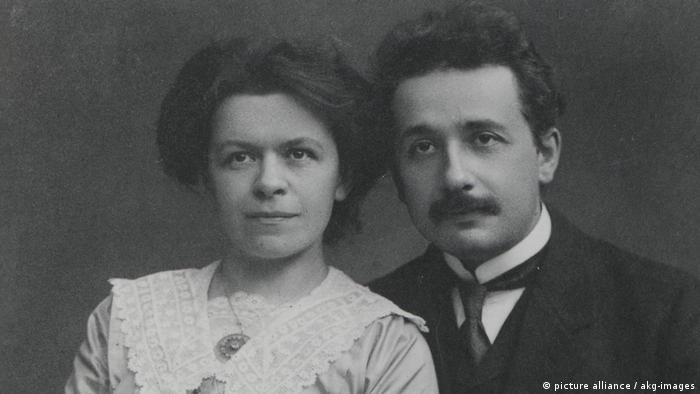 Albert Einstein and his wife Mileva Maric in 1912

With his diploma in his pocket, he hoped for an assistant position at his university in 1900, but the professors knew the young man was too unconventional and independent. Instead, he got a job as a substitute teacher and later through some connections got a position at the patent office in Bern, Switzerland.

The position didn't stop Einstein from continuing his research. In 1905 he published four groundbreaking articles in the Annals of Physics, including the Light Quantum Hypothesis and the Theory of Special Relativity. In 1906, he was awarded a doctorate in physics.

In 1909, the University of Zurich appointed him to chair of theoretical physics. Four years later he began at the Prussian Academy of Sciences in Berlin. Here, as he says, he could do his research undisturbed without "teacher's worries." In Berlin, he fell in love with his cousin Elsa, who would later become his second wife.

In 1916, he succeeded in publishing his General Theory of Relativity. With this, he shot to fame in 1919 and moved into the spotlight of the global public. In 1921 he was awarded the Nobel Prize for his research.

A pacifist and world citizen

As the First World War was looming, contrary to the prevailing enthusiasm for war, Einstein opposed the conflict. As a member of the Committee for Intellectual Cooperation, he wanted to promote cooperation among international scientists in the League of Nations. He was a member of the German League for Human Rights and courageously demonstrated for peace and against the war.

Religion wasn't his thing either. Although he had attended as a child both a Catholic school and Israelite religious studies, by the age of 13, Einstein already described himself as unaffiliated with any religion. He felt that the Bible was not compatible with his scientific considerations.

He nevertheless realized early on that Jews would serve as scapegoats; he was also victimized as a researcher. Einstein therefore viewed his relationship to the Jewish people to be his "strongest human bond."

In March 1933, he left Germany's growing anti-Semitism because, as he said, he wanted to live only in a country "in which political freedom, tolerance and equality of all citizens prevail over the law." Minister of Propaganda Joseph Goebbels proclaimed in May of the same year, "Jewish intellectualism is dead," and symbolically had different authors' writings burned, including Einstein's.

In the US, Einstein obtained a position at Princeton University, New Jersey, at the Institute for Advanced Studies. 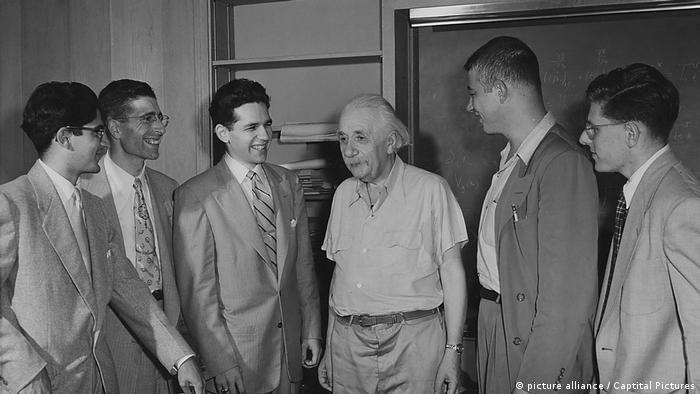 Albert Einstein with his students at Princeton in the early 1930s

Einstein became an American citizen in 1940. There, in his adopted country, the famous scientist remained a fighter for peace. But his pacifism was put to the test by the Nazis. Fearing that Germany would drop a nuclear bomb, Einstein suggested in a letter to President Roosevelt in 1939 that the Americans should build one first.

Looking back years later, he said: "I was well aware of the terrible danger that the success of this enterprise posed to humanity. But the probability that the Germans would be able to work on the same problem with the probability of success forced me to take this step. I had no other choice, although I have always been a convinced pacifist. In my opinion, killing in war is no better than ordinary murder."

The Jewish pogroms in Germany incited him to collect money for the establishment of an Israeli state as well as the University of Jerusalem. He was even offered to become Israel's president in 1948 following the creation of the state. But the 73-year-old wanted to continue exploring to discover the "world formula" that unites all physical backgrounds.

The new state remained close to his heart; the Nobel laureate bequeathed his estate to the Hebrew University in Jerusalem.

Einstein fought for his dream of a world without war until his death on April 18, 1955. Again and again, he pointed out the dangers of weapons of mass destruction.

In 1936, he placed the following message in a time capsule: "Dear Posterity, If you have not become more just, more peaceful, and generally more rational than we are (or were) — why then, the Devil take you. Having, with all respect, given utterance to this pious wish, I am (or was) Yours, Albert Einstein."

Albert Einstein's 'God' letter goes under the hammer at Christie's

The handwritten letter blew past auction estimates, selling for well over $2 million. The page-and-a-half letter details the legendary physicist's feelings about Judaism and God. (04.12.2018)