A military document criticizing the general state of Germany's fighter jets has surfaced. Germany's defense minister meanwhile insists the country is ready to join the fight against the self-styled "Islamic State" (IS). 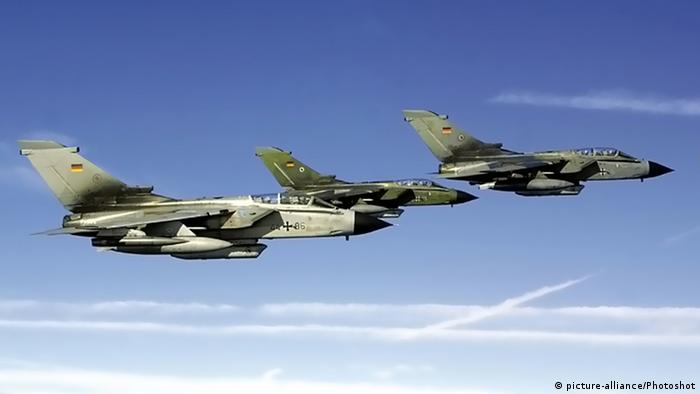 The German government is getting ready to send Tornado fighter jets to support the international coalition against the self-declared "Islamic State" (IS) in Syria. Parliamentary approval is expected to pass later in the week.

But ahead of the final vote, a military report saying that less than half of its arsenal of Tornados was actually ready for deployment surfaced. Out of 93 commissioned fighter jets, only 66 were operational in general terms and only 29 were combat-ready at the current time.

While a general inspection last year had revealed that 58 percent of the Tornado aircraft were ready for deployment, the number for this year had fallen to 44 percent. The chiefs of staff for the German armed forces recommend running at 70 percent capacity.

The 81-page Defense Ministry document also criticized the lack of available spare parts, saying that these had proven to be difficult to procure for Tornados, which have been in the process of being gradually phased out of the German military arsenal.

Inspector-General Volker Wieker, part of the team that had prepared the report, said that despite a planned investment of 5.6 billion euros ($5.9 billion) over the next ten years into a general overhaul of Germany's military equipment, there should be "no expectations for a quick-fix" to the current problem.

The report also highlighted shortcomings in newer military aircraft, including the new fleet of Eurofighter warplanes, which are starting to replace Germany's fleet of Tornados.

Von der Leyen: Germany is ready for deployment in Syria

Germany's Minister of Defense Ursula von der Leyen, however, defended the current state of the air force, saying that there were "30 Tornados ready for immediate deployment, and we only need six for Syria."

Germany's Tornado fighter jets are intended to perform reconnaissance flights over Syria to support the international coalition fighting IS following a direct plea by French President Francois Hollande for Germany to assist in the conflict after the November 13 terrorist attacks in Paris.

The planned German mission also includes a Navy frigate and the deployment of 1,200 troops.